Carla Lazzari, better known simply as Carla, is a French singer. She represented her country at the 2019 Junior Eurovision Song Contest with the song "Bim bam toi", finishing fifth.

Carla Lazzari is from Châteauneuf-Villevieille near Nice in the Alpes-Maritimes department in southeastern France.

She was born into a family of musicians and singers. At the age of 5 she entered the Conservatory of Nice.

In 2018, she reached the final of The Voice Kids France.

In 2019, she was selected by France Télévisions to represent France with the song "Bim bam toi" at that year's Junior Eurovision Song Contest. She ended 5th at the contest, with 169 points.

The contents of this page are sourced from Wikipedia article on 05 May 2020. The contents are available under the CC BY-SA 4.0 license.
View Carla Lazzari 's image gallery
Image Gallery 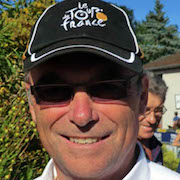