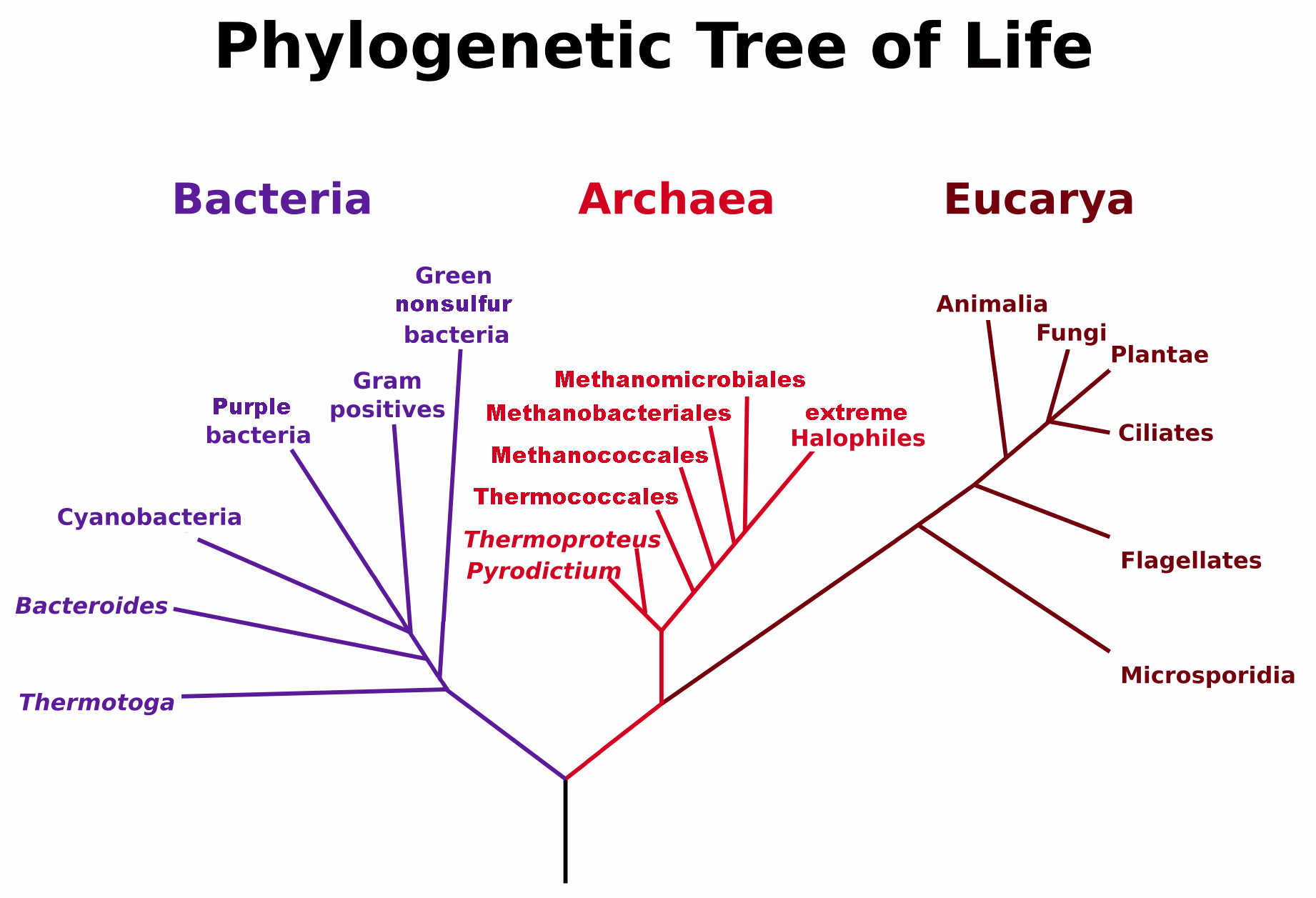 Carl Richard Woese (/ˈwoʊz/; July 15, 1928 – December 30, 2012) was an American microbiologist and biophysicist. Woese is famous for defining the Archaea (a new domain of life) in 1977 by phylogenetic taxonomy of 16S ribosomal RNA, a technique pioneered by Woese which revolutionized the discipline of microbiology. He was also the originator of the RNA world hypothesis in 1967, although not by that name. He held the Stanley O. Ikenberry Chair and was professor of microbiology at the University of Illinois at Urbana–Champaign.

Carl Woese was born in Syracuse, New York on July 15, 1928. Woese attended Deerfield Academy in Massachusetts. He received a bachelor's degree in mathematics and physics from Amherst College in 1950. During his time at Amherst, Woese took only one biology course (Biochemistry, in his senior year) and had "no scientific interest in plants and animals" until advised by William M. Fairbank, then an assistant professor of physics at Amherst, to pursue biophysics at Yale.

In 1953, he completed a Ph.D. in biophysics at Yale University, where his doctoral research focused on the inactivation of viruses by heat and ionizing radiation. He studied medicine at the University of Rochester for two years, quitting two days into a pediatrics rotation. Then he became a postdoctoral researcher in biophysics at Yale University investigating bacterial spores. From 1960–63, he worked as a biophysicist at the General Electric Research Laboratory in Schenectady, New York. In 1964, Woese joined the microbiology faculty of the University of Illinois at Urbana–Champaign, where he focused on Archaea, genomics, and molecular evolution as his areas of expertise. He became a professor at the University of Illinois at Urbana–Champaign's Carl R. Woese Institute for Genomic Biology, which was renamed in his honor in 2015, after his death.

Early work on the genetic code

Woese turned his attention to the genetic code while setting up his lab at General Electric's Knolls Laboratory in the fall of 1960. Interest among physicists and molecular biologists had begun to coalesce around deciphering the correspondence between the twenty amino acids and the four letter alphabet of nucleic acid bases in the decade following James D. Watson, Francis Crick, and Rosalind Franklin's discovery of the structure of DNA in 1953. Woese published a series of papers on the topic. In one, he deduced a correspondence table between what was then known as "soluble RNA" and DNA based upon their respective base pair ratios. He then re-evaluated experimental data associated with the hypothesis that viruses used one base, rather than a triplet, to encode each amino acid, and suggested 18 codons, correctly predicting one for proline. Other work established the mechanistic basis of protein translation, but in Woese's view, largely overlooked the genetic code's evolutionary origins as an afterthought.

In 1962 Woese spent several months as a visiting researcher at the Pasteur Institute in Paris, a locus of intense activity on the molecular biology of gene expression and gene regulation. While in Paris, he met Sol Spiegelman, who invited Woese to visit the University of Illinois after hearing his research goals; at this visit Spiegelman offered Woese a position with immediate tenure beginning in the fall of 1964. With the freedom to patiently pursue more speculative threads of inquiry outside the mainstream of biological research, Woese began to consider the genetic code in evolutionary terms, asking how the codon assignments and their translation into an amino acid sequence might have evolved.

Discovery of the third domain

For much of the 20th century, prokaryotes were regarded as a single group of organisms and classified based on their biochemistry, morphology and metabolism. In a highly influential 1962 paper, Roger Stanier and C. B. van Niel first established the division of cellular organization into prokaryotes and eukaryotes, defining prokaryotes as those organisms lacking a cell nucleus. Adapted from Édouard Chatton's generalization, Stanier and Van Niel's concept was quickly accepted as the most important distinction among organisms; yet they were nevertheless skeptical of microbiologists' attempts to construct a natural phylogenetic classification of bacteria. However, it became generally assumed that all life shared a common prokaryotic (implied by the Greek root πρό (pro-), before, in front of) ancestor.

In 1977, Carl Woese and George E. Fox experimentally disproved this universally held hypothesis about the basic structure of the tree of life. Woese and Fox discovered a kind of microbial life which they called the “archaebacteria” (Archaea). They reported that the archaebacteria comprised "a third kingdom" of life as distinct from bacteria as plants and animals. Having defined Archaea as a new "urkingdom" (later domain) which were neither bacteria nor eukaryotes, Woese redrew the taxonomic tree. His three-domain system, based on phylogenetic relationships rather than obvious morphological similarities, divided life into 23 main divisions, incorporated within three domains: Bacteria, Archaea, and Eucarya. 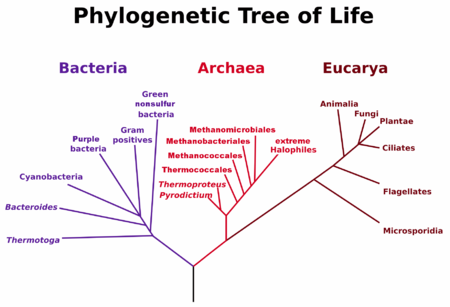 Acceptance of the validity of Woese's phylogenetically valid classification was a slow process. Prominent biologists including Salvador Luria and Ernst Mayr objected to his division of the prokaryotes. Not all criticism of him was restricted to the scientific level. A decade of labor-intensive oligonucleotide cataloging left him with a reputation as "a crank," and Woese would go on to be dubbed as "Microbiology's Scarred Revolutionary" by a news article printed in the journal Science. The growing amount of supporting data led the scientific community to accept the Archaea by the mid-1980s. Today, few scientists cling to the idea of a unified Prokarya.

Woese's work on Archaea is also significant in its implications for the search for life on other planets. Before the discovery by Woese and Fox, scientists thought that Archaea were extreme organisms that evolved from the organisms more familiar to us. Now, most believe they are ancient, and may have robust evolutionary connections to the first organisms on Earth. Organisms similar to those archaea that exist in extreme environments may have developed on other planets, some of which harbor conditions conducive to extremophile life.

Notably, Woese's elucidation of the tree of life shows the overwhelming diversity of microbial lineages; single-celled organisms represent the vast majority of the biosphere's genetic, metabolic, and ecologic niche diversity. As microbes are crucial for many biogeochemical cycles and to the continued function of the biosphere, Woese's efforts to clarify the evolution and diversity of microbes provided an invaluable service to ecologists and conservationists. It was a major contribution to the theory of evolution and to our knowledge of the history of life.

Woese also speculated about an era of rapid evolution in which considerable horizontal gene transfer occurred between organisms. First described by Woese and Fox in a 1977 paper, these organisms, or progenotes, were imagined as protocells with very low complexity due to their error-prone translation apparatus ("noisy genetic transmission channel"), which produced high mutation rates that limited the specificity of cellular interaction and the size of the genome. This early translation apparatus would have produced a group of structurally similar, functionally equivalent proteins, rather than a single protein. Furthermore, because of this reduced specificity, all cellular components were susceptible to horizontal gene transfer, and rapid evolution occurred at the level of the ecosystem.

The transition to modern cells (the "Darwinian Threshold") occurred when organisms evolved translation mechanisms with modern levels of fidelity; improved performance allowed cellular organization to reach a level of complexity and connectedness that made genes from other organisms much less able to displace an individual's own genes.

In later years, Woese's work concentrated on genomic analysis to elucidate the significance of horizontal gene transfer (HGT) for evolution. He worked on detailed analyses of the phylogenies of the aminoacyl-tRNA synthetases and on the effect of horizontal gene transfer on how those key enzymes are distributed among organisms. The goal of the research was to explain how the primary cell types (the archaeal, eubacterial, and eukaryotic) evolved, from some ancestral state in the RNA world.

Woese shared his thoughts on the past, present, and future of biology in Current Biology:

The "important questions" that 21st century biology faces all stem from a single question, the nature and generation of biological organization. . . . Yes, Darwin is back, but in the company of . . . scientists who can see much further into the depths of biology than was possible heretofore. It is no longer a "10,000 species of birds" view of evolution—evolution seen as a procession of forms. The concern is now with the process of evolution itself.

I see the question of biological organization taking two prominent directions today. The first is the evolution of (proteinaceous) cellular organization, which includes sub-questions such as the evolution of the translation apparatus and the genetic code, and the origin and nature of the hierarchies of control that fine-tune and precisely interrelate the panoply of cellular processes that constitute cells. It also includes the question of the number of different basic cell types that exist on earth today: did all modern cells come from a single ancestral cellular organization?

The second major direction involves the nature of the global ecosystem. . . . Bacteria are the major organisms on this planet—in numbers, in total mass, in importance to the global balances. Thus, it is microbial ecology that . . . is most in need of development, both in terms of facts needed to understand it, and in terms of the framework in which to interpret them.

Woese considered biology to have an "all-important" role in society. In his view, biology should serve a broader purpose than the pursuit of "an engineered environment":

What was formally recognized in physics needs now to be recognized in biology: science serves a dual function. On the one hand it is society's servant, attacking the applied problems posed by society. On the other hand, it functions as society's teacher, helping the latter to understand its world and itself. It is the latter function that is effectively missing today.

Microbiologist Justin Sonnenburg of Stanford University said "The 1977 paper is one of the most influential in microbiology and arguably, all of biology. It ranks with the works of Watson and Crick and Darwin, providing an evolutionary framework for the incredible diversity of the microbial world".

With regard to Woese's work on horizontal gene transfer as a primary evolutionary process, Professor Norman R. Pace of the University of Colorado at Boulder said, "I think Woese has done more for biology writ large than any biologist in history, including Darwin... There's a lot more to learn, and he's been interpreting the emerging story brilliantly".