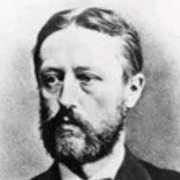 Noorden published books on medieval and Renaissance history, and also works on European history from more recent times. He is known for writings on events that took place during the War of Spanish Succession, and works involving the historical era surrounding Charles V. In addition, he published a number of articles involving the political histories of England, France and the Netherlands. One of his better efforts was an unfinished book on the recent history of Spain.

Noorden was a catalyst in the founding of the Königlich-Sächsischen Historischen Seminars (Royal Saxon Historical Seminars) at the University of Leipzig (1877). He was a member of the Royal Saxon Society of Sciences in Leipzig, and from 1874 onward, a corresponding member of the Bavarian Academy of Sciences (Bayerischen Akademie der Wissenschaften).

The contents of this page are sourced from Wikipedia article on 10 Mar 2020. The contents are available under the CC BY-SA 4.0 license.
View Carl von Noorden 's image gallery
Image Gallery