Von Hausswolff was born in Linköping. He is an expert in the work of Friedrich Jürgenson, an electronic voice phenomenon (EVP) researcher who claimed to have detected voices of the dead hidden in radio static. Von Hausswolff's own sound works are pure, intuitive studies of electricity, frequency, and tone. Collaborators include Erik Pauser, with whom he worked as Phauss (1981-1993), Leif Elggren, and John Duncan (artist). He also collaborates with EVP researcher Michael Esposito, filmmaker Thomas Nordanstad, and with Graham Lewis (Wire) and Jean-Louis Huhta in the band OSCID.

Von Hausswolff is co-monarch (with Elggren) of the conceptual art project The Kingdoms of Elgaland-Vargaland (KREV): all areas of no-man's land, territories between national boundaries on both land and sea, and digital and mental spaces. This nation has its own national anthem, flag, coat of arms, currency, citizens, and ministers.

Recent audio works include "800 000 Seconds in Harar" (Touch), "Matter Transfer" (iDeal), "The Wonderful World of Male Intuition" (Oral), "There Are No Crows Flying Around the Hancock Building" (Lampo), "Rats", "Maggots", and "Bugs" (all three on Laton), "Three Overpopulated Cities ..." (Sub Rosa), "A Lecture on Disturbances in Architecture" (Firework Editions), and "Ström" and "Leech" (both on Raster-Noton).

He is also the curator and producer of the sound-installation "freq out", shown at Moderna Museet (Stockholm), Henie-Onstad Center (Oslo), Sonambiente (Berlin), and other places.

In 2012, Von Hausswolff was heavily criticized for allegedly using ashes of Holocaust victims from the Majdanek concentration camp in a painting. As of 12 December 2012, the Martin Bryder Gallery in Lund had pulled the painting from exhibition. In 2017, his electro-acoustic composition Still Life - Requiem, was released on LP. The music uses only sounds from the above-mentioned ashes.

In 2019, von Hausswolff formed a new musical collaboration with the Icelandic musician Jónsi (Sigur Rós), which they named Dark Morph. On 10 May 2019, they released their first album, also titled Dark Morph. The project "promises to explore the ramifications of ongoing environmental collapse to the oceans and its inhabitants." The album consists mainly of ambient sounds, often simulating the sounds of animals and nature, and contains very few actual melodies.

Carl Michael is the father of musician/composer Anna von Hausswolff.

The contents of this page are sourced from Wikipedia article on 10 Apr 2020. The contents are available under the CC BY-SA 4.0 license.
View Carl Michael von Hausswolff 's image gallery
Image Gallery 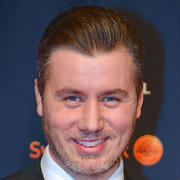