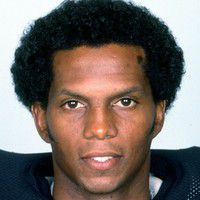 Clarence Burgess Owens (born August 2, 1951) is an American politician and retired American football safety who played ten seasons in the National Football League for the New York Jets and the Oakland Raiders. He is the Republican nominee for Utah's 4th congressional district in the 2020 election.

Owens graduated from Rickards High School in Tallahassee, Florida in 1969, and then attended the University of Miami, where he was a First-Team All-American defensive back, Most Valuable Defensive Player of the North–South All Star Game, and MVP of the Coaches All-American Game. He was inducted into the University of Miami Sports Hall Of Fame in 1980, and its Orange Bowl "Ring of Honor" in 1999.

The New York Jets selected Owens in the first round of the 1973 NFL Draft. During his rookie season, he returned a kickoff 82 yards for a touchdown against the Denver Broncos on October 28. This was the Jets' only TD scored on a kickoff return during the 1970s. He was a regular starter for the Jets for most of the 1970s, and was a part of the Raiders' 1980 championship team.

Owens has described his views as “very conservative.” In June 2019, Owens, who is black, provided testimony to a United States House Committee on the Judiciary subcommittee opposing a bill that advocated reparations for slavery. Owens has also criticized U.S. national anthem protests and Colin Kaepernick. In November 2019, Owens called Donald Trump "an advocate for black Americans." He is a frequent guest contributor on Fox News.

In November 2019, Owens announced that he would run for the U.S. House of Representatives. He was one of four candidates to run in the 2020 Republican primary for the seat representing Utah's 4th congressional district.

At a June 1, 2020 Republican primary debate, he stated his position that Democrats in Washington are held in thrall by Marxists and socialists, whom he described as enemies of America. “The days of Ronald Reagan and Tip O'Neill are over. We’re dealing with people who hate our country,” Owens stated. He also stated his position that the Affordable Care Act should be repealed, and stated support for President Trump.

On June 30, 2020, he won the primary with 43% of the vote, defeating Utah State Representative Kim Coleman by a twenty-point margin. Owens also defeated challengers Jay McFarland and Trent Christensen.

Owens was married but experienced divorce after 34 years. He has six children. He is a member of The Church of Jesus Christ of Latter-day Saints and has spoken publicly about his faith.

Owens is a survivor of prostate cancer. He is of no relation to fellow black Republican Candace Owens.