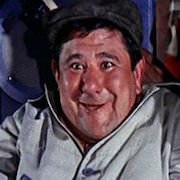 Hackett was one of two children born into a Jewish family living in Brooklyn, New York. His mother Anna (née Geller) worked in the garment trades while his father Philip Hacker was a furniture upholsterer, and part-time inventor. Hackett grew up across from Public School 103 on 54th Street and 14th Avenue in Borough Park, Brooklyn, and was active in varsity football and drama club at New Utrecht High School. Hackett suffered from Bell's palsy as a child, the lingering effects of which contributed to his distinctive slurred speech.

While still a student, Hackett worked as a "tummler" (Yiddish for "tumult maker") entertaining guests in the Catskills Borscht Belt resorts. While there, he began performing stand-up comedy in the resort nightclubs as "Butch Hacker". He appeared first at the Golden Hotel in Hurleyville, New York, claiming later he did not get one single laugh. Following his graduation from high school in 1942, Hackett enlisted in the United States Army and served during World War II for three years in an anti-aircraft battery.

Hackett's first job after the war was at the Pink Elephant, a Brooklyn club. It was here that he changed his name from Leonard Hacker to Buddy Hackett. He made appearances in Los Angeles and Las Vegas, and continued to perform in the Catskills. He acted on Broadway, in Lunatics and Lovers, where Max Liebman saw him and put him in two television specials.

Hackett's movie career began in 1950 with a 10-minute "World of Sports" reel for Columbia Pictures called King of the Pins. The film demonstrated championship bowling techniques, with expert Joe Wilman demonstrating the right way and Hackett (in pantomime) exemplifying the wrong way. There was an anecdote that, because of this appearance, Hackett received an offer to join the Three Stooges from Jules White, the head of Columbia short subject department, in 1952. Curly Howard had suffered a debilitating stroke in 1946; his older brother, Shemp Howard was intended to replace him only on a temporary basis until he fully recovered, but Curly passed away in January 1952. It was said Hackett even joined Moe Howard and Larry Fine for a rehearsal, but turned down the offer eventually when he felt he did not fit with the act's comedy style and wanted to develop his own style as a solo act. This rumor was later dismissed as either untrue or unfounded.

Hackett would not return to movies until 1953, after one of his nightclub routines attracted attention. With a rubber band around his head to slant his eyes, Hackett's "The Chinese Waiter" lampooned the heavy dialect, frustration, and communication problems encountered by a busy waiter in a Chinese restaurant: "No, we no have sprit-pea soup ... We gotta wonton, we got eh-roll ... No orda for her, juss orda for you!" The routine was such a hit that Hackett made a recording of it, and was hired to reprise it in the Universal-International musical Walking My Baby Back Home (1953), in which he was third-billed under Donald O'Connor and Janet Leigh.

Hackett was an emergency replacement for the similarly built Lou Costello in 1954. Abbott and Costello were set to make a feature-length comedy Fireman, Save My Child, featuring Spike Jones and His City Slickers. Several scenes had been shot with stunt doubles when Lou Costello was forced to withdraw due to illness. Universal-International salvaged the project by hiring Hugh O'Brian and Hackett to take over the Abbott and Costello roles, using already shot footage of the comedy duo in some long shots; Jones and his band became the main attraction.

Hackett became known to a wider audience when he appeared on television in the 1950s and '60s as a frequent guest on variety talk shows hosted by Jack Paar and Arthur Godfrey, telling brash, often off-color jokes, and mugging at the camera. Hackett was a frequent guest on both the Jack Paar and the Johnny Carson versions of The Tonight Show. According to the board game Trivial Pursuit, Hackett has the distinction of making the most guest appearances in the history of The Tonight Show Starring Johnny Carson. During this time, he also appeared as a panelist and mystery guest on CBS-TV's What's My Line? and filled in as emcee for the game show Treasure Hunt. He made fifteen guest appearances on NBC-TV's The Perry Como Show between 1955 and 1961. He appeared with his roommate Lenny Bruce on the Patrice Munsel Show (1957-1958), calling their comedy duo the "Not Ready for Prime Time Players," 20 years before the cast of Saturday Night Live used the same name.

Hackett appeared twice on ABC's The Rifleman, starring Chuck Connors and Johnny Crawford. In both episodes, "Bloodlines" (1959) and "The Clarence Bibs Story" (1961), his fellow guest star was Denver Pyle. He was cast as Daniel Malakie in "Bloodlines", the father of three boisterous brothers headed to trouble, and then as Clarence Bibs in the episode of that same name. Bibs is a handyman who after cleaning a gun accidentally kills a notorious outlaw, Longden (X Brands). Then, Longden’s former partner, George Tanner (Denver Pyle), comes to town but avoids confrontation with Bibs and accepts the explanation that Wicks' death was accidental.

Hackett starred as the title character on NBC-TV's Stanley, a 1956–57 situation comedy which ran for 19 weeks on Monday evenings at 8:30 pm ET. The half-hour series also featured a young Carol Burnett and the voice of Paul Lynde. The Max Liebman produced program aired live before a studio audience and was one of the last sitcoms from New York to do so. Stanley revolved around the adventures of the titular character (Hackett) as the operator of a newsstand in a posh New York City hotel.

Hackett appeared opposite Robert Preston in the film adaptation of The Music Man (1962). In It's a Mad, Mad, Mad, Mad World (1963), Hackett was paired with Mickey Rooney, with whom he had also recently made Everything's Ducky (1961), in which they played two sailors who smuggle a talking duck aboard a Navy ship. Children became familiar with him as lovable hippie auto mechanic Tennessee Steinmetz in Disney's The Love Bug (1969).

In 1964, he had a stint on Broadway, appearing with Richard Kiley in I Had a Ball.

He appeared many times on the game show Hollywood Squares in the late 1960s. In one episode, Hackett (who was Jewish) was asked which was the country with the highest ratio of doctors to populace; he answered Israel, or in his words, "The country with the most Jews." Despite the audience roaring with laughter (and Hackett's own belief that the actual answer was Sweden), the answer turned out to be correct. Hackett's regular guest shots on Jack Paar's Tonight Show in the early 1960s were rewarded with a coveted appearance on Paar's final Tonight program on March 29, 1962.

Hackett continued to appear on Johnny Carson's Tonight Show until Carson left the series in 1992.

In 1978, Hackett delivered a dramatic performance as Lou Costello in the television movie Bud and Lou opposite Harvey Korman as Bud Abbott. The film told the story of Abbott and Costello, and he and Korman did a rendition of the team's famous "Who's on First?" routine.

In 1979, Hackett was the voice of the groundhog "Pardon Me Pete", and the narrator of the Rankin/Bass Christmas special Jack Frost (1979). He starred in the 1980 film Hey Babe!. That same year, he hosted a syndicated revival of the 1950–61 Groucho Marx quiz show You Bet Your Life which lasted for one year.

Throughout the 1970s Hackett appeared regularly in TV ads for Tuscan Dairy popsicles and yogurt. But his most famous television campaign was for Lay's potato chips ("Nobody can eat just one!") which ran from 1968 to 1971; Hackett had succeeded Bert Lahr as Lay's spokesman. He guest-starred in the Space Rangers episode, "To Be Or Not To Be", as has-been comedian Lenny Hacker, a parody of his stage persona. The character's name was Hackett's own real name. He also appeared on the television series “The Love Boat“ in 1979 (Season 3, Episode 4), playing the part of a cab driver, Mickey, who accepted an offer to join his jilted passenger (Arlene Golanka) on a three day cruise. He also appeared in LA Law as a friend of Secretary Roxanne helping her by doing free tv infomercials.

For his contribution to the motion picture industry, Hackett was given a star on the Hollywood Walk of Fame. In 2000, a Golden Palm Star on the Palm Springs, California, Walk of Stars was dedicated to him.

In his final years, Hackett had a recurring spot called "Tuesdays with Buddy" on The Late Late Show with Craig Kilborn in which he shared stories of his career and delivered some of his comedic routines.

In 1999 he appeared in 13 episodes of Fox's "Action" TV series as a security guard and chauffeur named Lonnie Dragon.

On June 12, 1955, Hackett married Sherry Cohen. They lived in Leonia, New Jersey, in the late 1950s. In August 1958, they bought the house previously owned by deceased crime boss Albert Anastasia in Fort Lee, New Jersey. After renovations, they moved in and lived there through most of the 1960s. In 2003, Hackett and his wife established the Singita Animal Sanctuary in California's San Fernando Valley. Hackett's son, Sandy, followed his father into the comedy world, and for years opened for his father before his performances. Sandy created a one-man stage show about his father after his death.

He was an avid firearms collector and owned a large collection that he sold off in his later years.

In the early 1990s Hackett was diagnosed with severe heart disease, but steadfastly refused to consider bypass surgery; his heart disease was the primary cause of his death. Hackett died on June 30, 2003, at his beach house in Malibu, California, at the age of 78. His son, comedian Sandy Hackett, said his father had been suffering from diabetes for several years and suffered a stroke nearly a week before his death which may have contributed to his demise. Two days later, on July 2, 2003, he was cremated and his ashes were given to family and friends.

On June 25, 2019, The New York Times Magazine listed Buddy Hackett among hundreds of artists whose material was reportedly destroyed in the 2008 Universal fire.

The contents of this page are sourced from Wikipedia article on 01 Apr 2020. The contents are available under the CC BY-SA 4.0 license.
View Buddy Hackett 's image gallery
Image Gallery