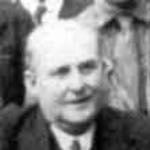 Bruno Emil Tesch (14 August 1890 – 16 May 1946) was a German chemist and entrepreneur. Together with Gerhard Peters and Walter Heerdt, he invented the insecticide Zyklon B. He was the owner of Tesch & Stabenow (called Testa), a pest control company he co-founded in 1924 with Paul Stabenow in Hamburg, Germany.

Following the end of World War II, he was arrested by the British as a war criminal, tried, and executed.

Tesch, along with fellow chemists Gerhard Peters and Walter Heerdt, with the support of I.G. Farben, began research into the use of hydrogen cyanide as a fumigating agent. They discovered a process in which the hydrogen cyanide could be manufactured and used in a solid form.

The patent was assigned to Degesch, "Deutsche Gesellschaft für Schädlingsbekämpfung mbH" (German Limited Company for Pest Control), subsidiary of I.G. Farben, with Walter Heerdt being the only one of the inventors to receive patent rights, a portion of the proceeds from the manufacture and sale. Peters joined Degesch and would become managing director during World War II. Degesch was designated by the German government to set the safety rules and standards for the use of Zyklon B, and was given the authority to authorize shipments from the manufacturer to the customer after the strict criteria were met.

Tesch & Stabenow manufactured neither Zyklon B nor any other chemicals. It was primarily a pest control company specializing in fumigation of commercial properties such as the warehouses and freighters in the Port of Hamburg. Zyklon B was produced by Dessauer Werke and Kaliwerke.

In 1925, Tesch & Stabenow – partly due to the largesse of Paul Haber of Degesch – received the exclusive rights to distribute the insecticide Zyklon B east of the Elbe River. In 1927, Stabenow departed from the firm. Tesch held a 45% share of the company and Degesch 55%. He would assume sole ownership of the company in 1942.

Tesch was first interrogated in Hamburg by British Captain and chemist Walter Freud. Freud was accompanied by Emil Sehm, a former Testa bookkeeper. Sehm claimed to have seen a memorandum concerning correspondence between Tesch and a Wehrmacht officer about the use of Zyklon B to gas humans. Tesch was arrested by the British occupation authorities on 3 September 1945, and released on 1 October 1945, only to be re-arrested on October 6.

Tesch was tried by a British military tribunal in the Curiohaus in Hamburg 1–8 March 1946. His two co-defendants were registered general representative Karl Weinbacher and Joachim Drosihn, the firm's first gassing technician.

The prosecution case stated that Zyklon B was used for "systematically exterminating human beings to an estimated total of six million, of whom four and a half million were exterminated by the use of Zyklon B in one camp alone, known as Auschwitz/Birkenau". (The figure of 4.5 million victims was based on Soviet estimates released right after the war).

The charge was that Tesch, "at Hamburg, Germany, between 1st January 1941, and 31 March 1945, in violation of the laws and usages of war, did supply poison gas used for the extermination of allied nationals interned in concentration camps, well knowing that the said gas was to be so used" in violation of Article 46 of the Hague Convention of 1907. One of the witnesses called by the prosecution was SS Rottenführer Perry Broad, who had worked in the political department in Auschwitz. Tesch and Weinbacher were condemned to death; Drosihn was acquitted. Tesch was executed by hanging on 16 May 1946, by Albert Pierrepoint in Hameln prison.

The contents of this page are sourced from Wikipedia article on 10 Mar 2020. The contents are available under the CC BY-SA 4.0 license.
View Bruno Tesch 's image gallery
Image Gallery