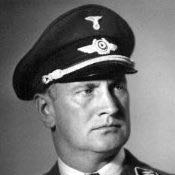 Colonel General Bruno Loerzer (22 January 1891 – 23 August 1960) was a German air force officer during World War I and World War II. Credited with 44 aerial victories during World War I, he was one of Germany's leading flying aces, as well as commander of one of the first Imperial German Air Service Jagdeschwaders.

Loerzer's close friendship with Hermann Goering led to Loerzer's service in the World War II Luftwaffe, with subsequent promotion to Generaloberst by the war's end. Goering described Loerzer as "his laziest general," but swept aside criticisms of him, commenting "I need someone I can drink a bottle of red wine with in the evening."

Born in Berlin, Loerzer was a prewar army officer who learned to fly in 1914. Hermann Göring flew as Loerzer's observer from 28 October 1914 until late June 1915. Transferring to fighters, Loerzer flew with two Jagdstaffeln in 1916 before joining Jagdstaffel 26 in January 1917. By then he had scored two victories over French aircraft. He had his aircraft painted distinctively striped in black and white. As his victory score mounted, he was awarded the Iron Cross First Class and House Order of Hohenzollern. In November 1917, he and his squadron mate Goering each had 15 kills, and both still coveted the highest Prussian decoration - the blue enamel cross of the Pour le Mérite. Thirty years later, Loerzer would snicker to colleagues that Goering had inflated his mission claims. "Do the same," Loerzer claimed Goering had urged him, "otherwise we'll never get ahead!" His tally reached 20 victories at the end of October and he received the Pour le Mérite in February 1918.

The same month, he took command of the newly formed Jagdgeschwader III, the third of Germany's famed "flying circuses." His aces included his brother Fritz, who claimed 11 victories. Leading Jasta 26 and three other squadrons, with Hermann Dahlmann's support as adjutant and wingman, Loerzer proved a successful wing commander. Equipped with the new BMW-engined Fokker D.VII, JG III cut a wide swath through Allied formations in the summer of 1918, and his own score mounted steadily. He achieved his last ten victories in September when he reached his final score of 44 victories. Shortly before the armistice, he was promoted to Hauptmann (captain).

Between the world wars

Loerzer irregularly fought with Freikorps anti-communist paramilitary units from December 1918 until March 1920. He commanded FA 427 in the Baltic area, supporting the Eiserne Division in the tactical air role. During the 1930s he was a leader in various civil aviation organizations (National Socialist Flying Corps: NSFK), and rejoined the Luftwaffe in 1935 with the rank of Oberst (colonel). Loerzer benefited from his long friendship with Göring, becoming Inspector of Fighters with rank of major general in 1938.

During the early war years he was commander of II Air Corps, being awarded the Knight's Cross of the Iron Cross in May 1940. His II Air Corps participated in the invasion of the Soviet Union in the summer of 1941, as a section of Kesselring's 2nd Air Fleet—in support of Field Marshal von Bock. His unit was transferred to Messina, Sicily in October 1941, and he remained there until the middle of 1943, when his section returned to the Italian mainland after suffering heavy losses.

In December 1942, Fighter Ace Werner Baumbach, Group Commander of III/Kampfgeschwader 30, wrote a letter to Hans Jeschonnek, then Chief of the General Staff of the Luftwaffe, regarding the heavy losses suffered by the II Air Corps under Loerzer's leadership. Loerzer was removed from command of the II Air Corps in February 1943, and subsequently promoted by Goering to Generaloberst as Chief of the Luftwaffe Personnel Department and Chief of Personnel Armament and National Socialist Leadership of the Luftwaffe. Loerzer showed his gratitude on the occasion of the Reichsmarshall's birthday in January 1944, where he presented Goering with a carload of black market goods from Italy - women's stockings, soaps, and other rare items, complete with a price list in order to keep black market prices uniform throughout Germany.

The contents of this page are sourced from Wikipedia article on 08 Mar 2020. The contents are available under the CC BY-SA 4.0 license.
View Bruno Loerzer 's image gallery
Image Gallery