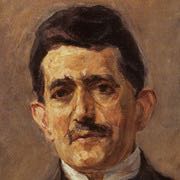 Bruno Cassirer (12 December 1872 – 29 October 1941) was a publisher and gallery owner in Berlin who had a considerable influence on the cultural life of the city.

He was born on 12 December 1872 in Breslau, the second child of Jewish parents, Julius and Julcher Cassirer. Julius was a partner, with two of Bruno's cousins, in a cable factory. Julius completed his final school examination in 1890 at the Leibniz-Gymnasium.

In 1898, together with his cousin Paul Cassirer, he opened a gallery and bookshop at 35 Viktoriastraße near Kemperplatz, Berlin. On 2 May 1898 the artists' association Berlin Secession was established with Paul and Bruno as secretaries. For three years they acquainted the art and literature scenes of Berlin with the newest waves from Belgian, English, French and Russian culture.

In 1901, Bruno and Paul divided the business into separate parts, with Paul running the gallery and art dealership, whilst Bruno owned the publishing side which relocated to 15 Derfflingerstraße. In 1902 he founded the monthly art journal Kunst und Künstler (Art and Artist) which turned out to become an influential and prestigious forum until it was closed down by the Nazis in 1933. In 1903 Christian Morgenstern joined as literary editor and the journal "Das Theater" was founded under his direction.

After the death of Bruno Cassirer, his son-in law Dr. George Hill (born Günther Hell) continued the publishing business until he died in 1995.

The contents of this page are sourced from Wikipedia article on 10 Mar 2020. The contents are available under the CC BY-SA 4.0 license.
View Bruno Cassirer 's image gallery
Image Gallery