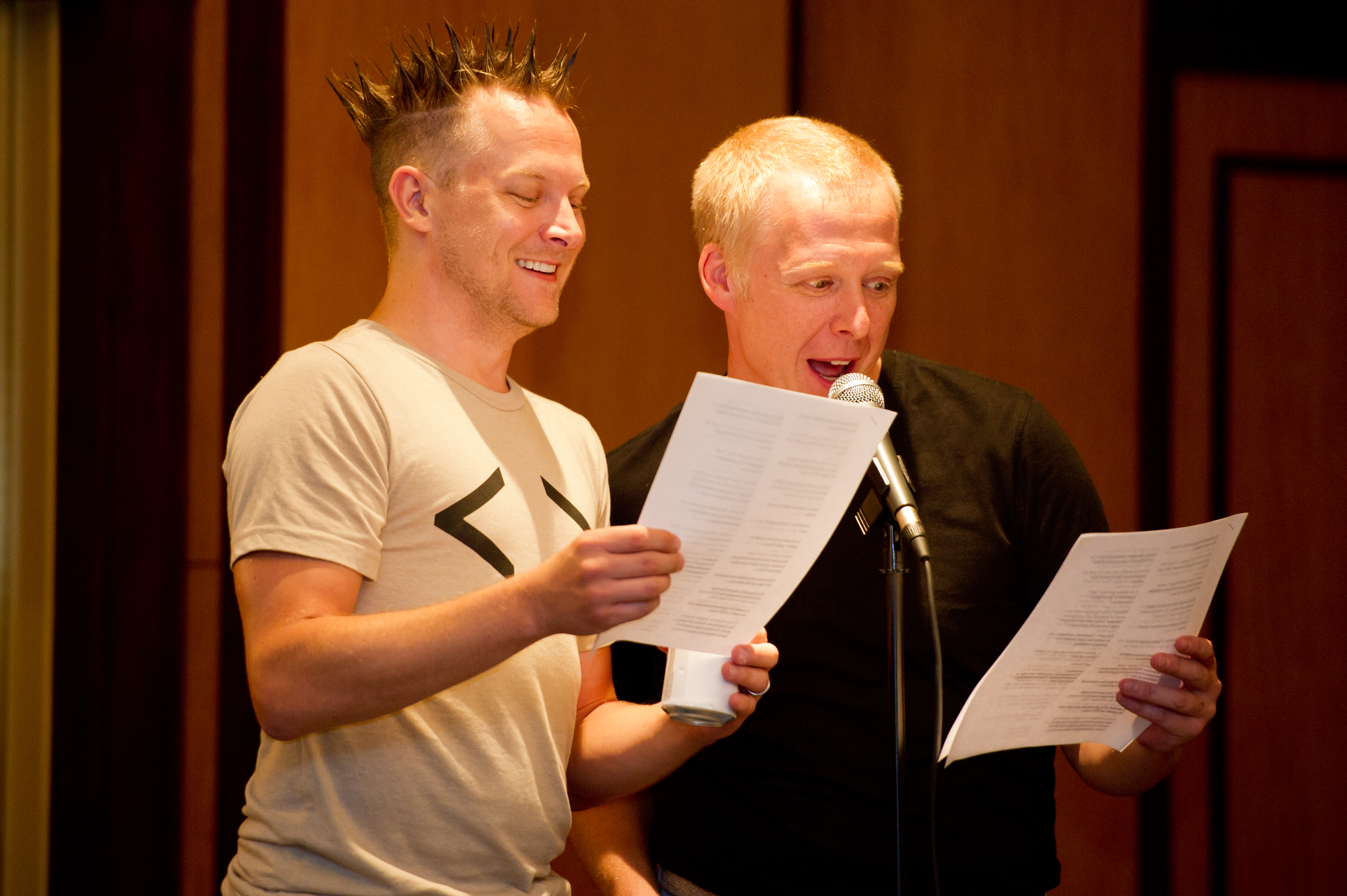 Brian Allen Brushwood (born January 17, 1975) is an American magician, podcaster, author, lecturer and comedian. Brushwood is known for the series Scam School, a show where he teaches the audience entertaining tricks at bars so they can "scam" a free drink from their friends. In addition to Scam School Brushwood co-hosts the podcasts Weird Things with Andrew Mayne and Justin Robert Young, Cordkillers with Tom Merritt and Night Attack with Young. Brushwood was also a regular guest on the This Week in Tech podcast. Brushwood performs his Bizarre Magic stage show across the United States and is the author of six books. Brushwood also co-hosts a YouTube show along with Jason Murphy called The Modern Rogue. Brushwood has appeared on national television numerous times including on The Tonight Show with Jay Leno, CNN and Food Network.

Brushwood was born in Fountain Valley, California, later lived in Colorado, Norway, and as of 2014, Texas. As a child Brushwood received a magic kit on Christmas Day one year. During his time as a student at the University of Texas at Austin Brushwood rediscovered his interest in magic, performing his first paid shows by filling in for another magician whose schedule was too full. This interest in magic led Brushwood to perform a 45-minute magic show as his senior thesis.

As an undergraduate Brushwood attended Dr. Rory Coker's Pseudoscience class which introduced him to scientific skepticism. Dr. Coker mentored Brushwood for his senior thesis and has invited Brushwood back as an alumnus to help demonstrate concepts in his class.

Brushwood graduated from the Plan II honors program at the University of Texas at Austin in 1997. After graduation Brushwood married his wife, Bonnie, and began testing video games for Rockwell Semiconductors, followed by a career at Dell where he designed high end computer systems. During his time at Dell, Brushwood moonlighted as a magician on Wednesday nights at The Electric Lounge in Austin, Texas while The Asylum Street Spankers took their break. In 1999 Brushwood was offered a raise at Dell and realized he wasn't following his passion so he made the decision to quit working at Dell and to start performing his Bizarre Magic show full-time.

When a television deal fell through Brushwood decided to look into Internet broadcasting where he would be able to have more control over the product and process. After filming several episodes of Brian Brushwood: On The Road Brushwood got the idea for Scam School. He originally intended to produce it independently but eventually sold the idea to Revision 3 and the first episode aired on April 6, 2008. Revision 3's location in San Francisco required Brushwood to travel to California to shoot episodes of Scam School, usually a dozen at a time due to travel expenses. In October 2008 one of Brushwood's childhood heroes, Richard Garriott, performed a magic trick he learned from Scam School while he was aboard the International Space Station. When Discovery Digital Networks purchased Revision 3 Brushwood used it as an opportunity to move production of Scam School from the San Francisco Bay area to Austin, Texas where he currently lives with his wife and three children. Brian "Shwood" Brushwood and Evan Bernstein during a live recording of The Geologic Podcast at Dragon*Con 2011 in Atlanta, GA

Veronica Belmont and Brushwood preparing preparing for the Game On! internet show 13 November 2011

Brushwood started his professional stage show in 1999 and now performs 100–200 live shows each year on college campuses across the United States. His Bizarre Magic show combines old sideshow stunts, mind reading, traditional magic and comedy. Conversations with audience members after performances inspired Brushwood to develop his Scams, Sasquatch, and the Supernatural lecture in 2004. Its content was derived from the pseudoscience course Brushwood took as an undergraduate and covers paranormal topics and how to detect fakes. Brushwood's Social Engineering: Scam Your Way Into Anything Or From Anybody lecture was initially developed for the 2009 South by Southwest Interactive panel with the same name.

In the September 3, 2010 episode of the Point of Inquiry podcast, host Karen Stollznow asked Brushwood about myth debunking in his various shows. Brushwood responded,

Part of the reason I love educating the masses as how to deceive is from my experience, because I got into magic before I took this pseudoscience and paranormal course, so I had these tools on how to fool people and I just had this vague understanding that people are really easy to fool, and it's not that we are broken, or dumb, or bad, or whatever. It's that the brain is built a certain way and magicians take advantage of that. And, it was only after taking the pseudoscience class that it crystallized everything and I realized that that's exactly what scam artists do as well. So, if I can get more people familiar with the tools and familiar with how easy it is to deceive other people, maybe more people will begin to question their own experiences.

Brushwood's signature hairstyle was modeled after Guile from Street Fighter II and takes nine minutes to set up. It is maintained with pomade and beeswax. Brushwood stated he can sleep on it without the style being disturbed and that it is low maintenance. Episode 23 of Brushwood's web series Brian Brushwood On The Road is a demonstration of how the style is created. Brushwood retired the hair style in 2012 citing his age and television projects as reasons for its discontinuation.

Mr. Happypants is a voodoo puppet that makes appearances in Brushwood's stage show and podcasts. Brushwood thought it would be fun if the character had a cute name but turned out to be mean, intending to come up with a better name later. While Mr. Happypants started off as a mean character he eventually evolved into pure evil and speaks through Brushwood with the assistance of a voice distorter. The first reported appearance of Mr. Happypants' evil incarnation during a stage show was in the comedy competition at a Texas Association of Magicians conference. Mr. Happypants' podcast debut was in Episode 6 of Brushwood's web series Brian Brushwood on the Road.

Brushwood's first national television appearance was on the April 18, 2000 episode of The Roseanne Show talk show where he performed the trick of shoving a nail in one eye and having it pop out the other. Brushwood has appeared twice on The Tonight Show with Jay Leno where he performed the "human crazy straw" and impressed Ed Asner with his "spinning cups" routine. Brushwood appeared in a segment on Anderson Cooper 360° where he taught Sanjay Gupta "the human blockhead". In CNN's Life Beyond Limits Brushwood taught Gupta how to eat fire. Brushwood also discussed eating fire on Food Network's Unwrapped, and appeared on Paula's Party where he ate fire and helped make a s'more brûlée. Brushwood has also appeared on Debra Duncan, The Jenny Jones Show, Unscrewed with Martin Sargent, Steve Harvey's Big Time Challenge, and Ricki Lake.

Brushwood starred, with co-host Jason Murphy, in the 12 Episode Hacking the System that premiered on February 27, 2014 on the National Geographic Channel. In the Hack Your Home episode Brushwood discusses home security and demonstrates techniques criminals use to break into a house. In the Hack Your Car episode Brushwood demonstrates how to escape from the trunk of a moving car and explains techniques used by car thieves. Brushwood live-streamed his viewing parties during the premiere and second airing. The series is now available to stream on Netflix and Brushwood and Murphy have spun off the series as The Modern Rogue on the Scam School channel.