Walsh hosted the ITV variety show Tonight at the London Palladium (2016-2019) and was a team captain on the sports-themed panel show Play to the Whistle (2015-2017). Since 2019, Walsh has starred in Bradley Walsh & Son: Breaking Dad, alongside his son Barney Walsh.

In addition to his television career, Walsh often appears in theatre shows, particularly pantomime’s. As a singer, he has released two albums, Chasing Dreams (2016) and When You're Smiling (2017), which both reached the top 15 in the UK Albums Chart.

Walsh was born in 1960 in Watford, Hertfordshire, to a Scottish mother, Margaret, and her husband Daniel. He grew up near Watford, in Leavesden, with his parents and sister Kerri. Walsh attended what is now Francis Combe Academy, a comprehensive school in Garston, Hertfordshire, which was then known as simply Francis Combe School. Leaving school at 16, Walsh got a job as an apprentice at Rolls-Royce's aircraft engine factory in Watford.

Walsh started his youth football career at Wormley Rovers. In late 1978, at the age of 18, Walsh became a professional football player for Brentford although he failed to make the first team and was regularly a member of the reserves. Walsh's time at Brentford also saw him play for Barnet on loan, making five Southern Football League appearances in the 1978–79 season. He also played for Tring Town, Boreham Wood and Chalfont St Peter. Ankle fractures brought Walsh's football career to an early end at the age of 22, in 1982. He denies reports that he played for Dunstable Town.

Walsh often participates in Soccer Aid, a charity football match where England takes on The Rest of the World with teams made up of celebrities and football legends. He helped England win the 2006 edition as a player and the 2012 and 2016 editions as a coach.

Following his football career, Walsh had a variety of jobs including working as a bluecoat at Pontins in Morecambe for three months. In October 1982, performing as a newcomer comedian, he came second in a talent contest at the Rolls-Royce Sports and Social Club in his home town of Leavesden.

Walsh was recruited by rival television channel ITV, who offered him the role as presenter on one of the network's new game shows, Midas Touch. In 1997, Walsh was asked to front the British adaptation of the popular US game show Wheel of Fortune following the decision of long-time presenter Nicky Campbell to leave the show after more than eight years.

Walsh's tenure on Wheel of Fortune lasted just one year, when he decided to turn his hand to acting. He also appeared on Lily Savage's Blankety Blank.

Walsh returned to ITV in 2002, after landing a regular role in the short lived British soap opera Night and Day. He featured in a total of 52 episodes. In 2003, Walsh played a minor role in an episode of The Bill spin-off M.I.T.: Murder Investigation Team.

On 31 May 2004, Walsh made his first appearance in Coronation Street as factory boss Danny Baldwin. It was originally envisaged that Walsh's character would be called Vic, however, Walsh asked for the character's name to be changed to Danny after his late father.

In December 2006, Walsh was written out of the series at his own request. During his time in Coronation Street, Walsh also appeared as Burglar Bill in the one-off play The Queen's Handbag.

In October 2007, he appeared in TV drama Torn. In 2008, Walsh appeared in two episodes of Doctor Who spin-off The Sarah Jane Adventures, in the second story of series two, The Day of the Clown, as a sinister entity that fed off other people's fear. In his role, he played three parts of the same ego – a sinister American-sounding clown called Odd Bob, a mysterious European-sounding ringmaster called Elijah Spellman, and the infamous Pied Piper of Hamelin.

In January 2009, Walsh and his son Barney featured in a special edition of the Channel 5 TV series, Dangerous Adventures for Boys, based on the best-selling book by Conn and Hal Iggulden, The Dangerous Book for Boys. Walsh and his son took part in hill-climbing before learning how to pilot a biplane.

In January 2009, Walsh began appearing in ITV crime drama Law & Order: UK. Walsh plays the character of DS Ronnie Brooks, a recovering alcoholic who has been in the police force for more than twenty years. From 2009 until 2014, Walsh starred in a total of 53 episodes. After the eighth series, Walsh decided to take a break from the programme and ITV decided to rest the show, but it has not been cancelled and is simply on a hiatus. Walsh said he would "like the opportunity to pursue other drama projects which ITV are developing".

In May 2014, Walsh was cast as Brutus in a BBC One comedy series called SunTrap, starring alongside Kayvan Novak and Keith Allen. The show premiered on 27 May 2015.

In October 2017, the BBC announced that Walsh had been cast as a companion, Graham O'Brien, in the eleventh series of Doctor Who. He reprised the role for the twelfth series in 2020.

In August 2008, Walsh fronted his own ITV series entitled My Little Soldier, in which young contestants are required to do "grown-up things" such as travelling on their own by train. In November and December 2008, Walsh hosted another game show for ITV, called Spin Star.

In June 2009, Walsh became the presenter of ITV game show The Chase, as well as the celebrity editions of the programme. The Chase has become popular, beating rival BBC quiz show Pointless regularly. The show features contestants who take on the "Chaser" in a series of general knowledge quiz rounds. There have also been a number of series of celebrity versions of the show, also hosted by Walsh.

Walsh hosted a pilot for an American version of The Chase in 2012. However, it was decided that Brooke Burns would host the show instead.

Between 2010 and 2011, Walsh was the presenter of Saturday panel show Odd One In, with regular panellists Peter Andre and Jason Manford.

In August 2014, Walsh hosted an ITV series called Come on Down! The Game Show Story, which looks back on the history of British game shows.

On 26 October 2014, after two successful pilots, Walsh began hosting the first series of Keep It in the Family. He returned to host a second series in 2015.

In 2014, Walsh presented an episode of Sunday Night at the Palladium. He returned to the show to present another episode in 2015. In 2016, he presented eight episodes of Tonight at the London Palladium, a spin-off from the Sunday night series. A second series began airing in April 2017. On 26 December 2014, Walsh hosted an entertainment special called A Christmas Cracker, filmed at the Hammersmith Apollo in London.

In May 2016, Walsh guest presented an episode of The One Show with Alex Jones.

In 2016, Walsh began presenting Cash Trapped, a daytime game show for ITV. A second series was aired in 2017.

In 2017, Walsh guest-hosted five episodes of The Nightly Show on ITV, which aired from 3 to 7 April. On 1 May 2019, it was announced that Walsh would host a new late-night talk show on ITV, titled Bradley Walsh's Late Night Guestlist. The pilot episode, featuring guests Holly Willoughby, Maya Jama and Piers Morgan, aired on 11 May 2019.

In 2005, Walsh was one of the victims of an Undercover in Series 5 of Ant & Dec's Saturday Night Takeaway. At the end of that Undercover, he "stormed off".

In 2007, Walsh took part in Northern Rock's All Star Golf Tournament on ITV, in which his team, Team Europe, won. Walsh stated that he has been playing golf since he was twenty years old.

In August 2008, Walsh appeared in talent show Maestro on BBC Two, where he was placed sixth.

Since 2015, Walsh has been a team captain on the sports-based panel show Play to the Whistle. Hosted by Holly Willoughby, the first series lasted for seven episodes, beginning in April 2015. The second series began in April 2016, followed by a third in 2017.

In 2020, Walsh was the "first ever double Undercover victim" in Series 16 of Ant & Dec's Saturday Night Takeaway.

Walsh approached rival game show host Alexander Armstrong to ask him for singing advice in 2016. The result, in November, was Walsh's release of his debut album, Chasing Dreams, which peaked at 10 on the UK Albums Chart. It consists of covers of jazz standards such as "That's Life" and "Mr. Bojangles" as well as the title track, an original song written by Walsh. It became the biggest-selling debut album by a British artist in 2016, selling 111,650 copies.

A year later, due to the success of Chasing Dreams, Walsh released a second album, When You're Smiling, consisting of more covers of traditional pop songs, and one original track. It reached 11 in the charts.

Walsh married the dancer Donna Derby in 1997. Together they have a son, Barney (born 2 December 1997), with whom Walsh appeared in the travel series Bradley Walsh & Son: Breaking Dad.

Walsh also has a daughter, Hayley (born 1982), from a previous relationship. 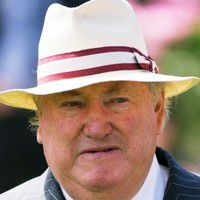