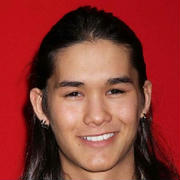 Nils Allen "Booboo" Stewart, Jr. (born January 21, 1994) is an American actor. He is known for playing Seth Clearwater, a shapeshifter in The Twilight Saga, and for his role as Jay in Descendants and its sequel, Descendants 2.

Nils Allen Stewart, Jr. was born in Beverly Hills, California. His father, Nils Allen Stewart, is a professional stuntman. He has Japanese, Chinese, and Korean ancestry on his mother's side along with Scottish, Russian, and Blackfoot ancestry on his father's side. Stewart was in a band named "Echoes of Angels" and toured with his mother and grandmother, who were known as "TSC" (The Stewart Clan).

During 2006–2010 Stewart appeared or starred in several independent, direct-to-video, or TV films. He also hosted six episodes of the children's show Blue Dolphin Kids in Hawaii, and did stunt work on several films including the 2006 film Zoom and the 2007 film Beowulf. He had roles on episodes of Steve Harvey's Big Time Challenge, ER, Dante's Cove, Everybody Hates Chris and "RL Stine's The Haunting Hour". Stewart also toured with Hannah Montana/Miley Cyrus on her Best of Both Worlds Tour featuring the Jonas Brothers and in the Camp Rock Freestyle Jam concert series. He recorded the opening theme for the Disney Channel Games 2008 titled "Let's Go!", and in 2010 "Under the Sea (from The Little Mermaid)" for the Disney recompilation disc DisneyMania 7. He promoted clothes, as well as toys and games such as Wii Fit and Hot Wheels. He also played Roman in Lab Rats: Elite Force.

In 2012, Stewart starred in the movie White Frog as Nick Young, a teen with Asperger's syndrome. In 2013, he played the lead role in Running Deer, an award-winning short film produced and directed by Brent Ryan Green through Toy Gun Films. Stewart also appeared in 2014's X-Men: Days of Future Past acting as Warpath.

Stewart starred in the 2015 Disney Channel original movie Descendants as Jay, the son of Jafar. He is set to reprise his role in the sequel, Descendants 2.

Booboo and Fivel Stewart at the Hollywood Premiere of Disney Channel's "Let It Shine" In June 2012.

In 2010, he was named a Celebrity Ambassador by the Muscular Dystrophy Association. In his role, Stewart is helping raise awareness in the fight against muscle diseases. He is also part of MDA's "Make a Muscle, Make a Difference" PSA campaign, being featured in print and TV advertisements. He also travelled to Perth, Australia for the Channel 7 Telethon, raising money for the Princess Margaret Hospital for Children. Stewart and his sister Fivel also hosted free concerts on behalf of the national non-profit organization Childhelp.

He appeared in a PETA campaign, encouraging people to adopt animals rather than to buy them from pet stores. He is also involved in Four Green Steps, an environmental organization based in Canada.