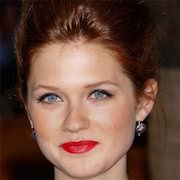 Bonnie Francesca Wright (born 17 February 1991) is an English actress, film director, screenwriter, model and producer. She is best known for playing the role of Ginny Weasley in the Harry Potter film series, based on the novel series of the same name by J. K. Rowling.

Bonnie Wright was born in London, the second child of Sheila Teague and Gary Wright, owners of the jewellery company Wright & Teague. Wright attended Prior Weston Primary School and later the King Alfred School in North London for her secondary education.

During the filming of Harry Potter and the Deathly Hallows – Part 1 and Part 2, she began attending London's University of the Arts: London College of Communication, to begin studies as a Film and Television Production Manager, because of her plans to continue acting and to work behind-the-scenes after filming Harry Potter. In 2012, she graduated with a Bachelor of Arts degree.

Wright appears in the first film, Harry Potter and the Philosopher's Stone, only in a small scene set at London King's Cross railway station, where her character and her mother Molly meet Harry Potter as four of her older brothers board the Hogwarts express. Her role became much more prominent in the second film, Harry Potter and the Chamber of Secrets, in which her character begins studies at Hogwarts and encounters a secret diary that begins to control her actions.

In Harry Potter and the Order of the Phoenix Wright played a central role, joining Dumbledore's Army and eventually participating in the climactic scene in which the DA and the Order of the Phoenix battle Lord Voldemort and his Death Eaters. Wright's central role continued in Harry Potter and the Half-Blood Prince where she became an important chaser for the Gryffindor Quidditch team and, ultimately Harry Potter's true love interest.

In Harry Potter and the Deathly Hallows Parts 1 and 2, Wright again reprised her central role for the last time. In these films she was seen most particularly in scenes before the three protagonists went in search of Horcruxes, the final Battle of Hogwarts and in the Epilogue set nineteen years later.

Wright received several positive reviews for her portrayal of Ginny Weasley. Variety wrote: "Bonnie Wright's Ginny intrigues as the sort of initial plain Jane who keeps growing on you." Comingsoon.net wrote "that If someone told me eight years ago that Bonnie Wright, introduced as Ginny Weasley in the first movie, would turn into such a strong dramatic actress who could carry scenes as well as the three leads, I wouldn't have believed it," and Film School Rejects who also wrote "Ginny (Bonnie Wright) in particular shines through, building on the power she gained in the last film to become an independent young woman that proves more complex with every scene." While critic Taran Adarsh said, "[Bonnie] Wright makes her impact feel nicely and beautifully as Ginny Weasley throughout the Harry Potter Series."

Harry Potter author J. K. Rowling gave a speech during the world premiere of the eighth and final film Harry Potter and the Deathly Hallows – Part 2 on 7 July 2011 in London, England. She announced that there are seven Harry Potter film series cast members to whom she refers as "The Big Seven". She named Wright as one of the seven members, along with Daniel Radcliffe, Rupert Grint, Emma Watson, Tom Felton, Matthew Lewis and Evanna Lynch.

In 2007, she guest starred on the Disney Channel's The Replacements, where she voiced Vanessa in the second-season premiere titled "London Calling".

In 2013, she co-starred in Before I Sleep opposite David Warner, Tom Sizemore, Cynthia Gibb, Eric Roberts, Eugene Simon, Campbell Scott and Chevy Chase. The film premiered at the 2013 Heartland Film Festival. Afterwards, she co-starred in The Sea, based on a John Bansville novel, as Rose the young nursemaid. The film premiered in competition at Edinburgh International Film Festival on 23 June 2013, and had its North American premiere at the 2013 Toronto International Film Festival.

In 2013, she also made her stage debut in the role of The Girl in Peter Ustinov's The Moment of Truth. The play was performed at the Southwark Playhouse in London on 26 June 2013 prior to an official opening on 28 June 2013 for a four-week run through 20 July 2013. Wright received positive reviews for her stage debut performance in The Moment of Truth play; the British Theatre Guide wrote "Bonnie Wright makes clear in her performance, she is motivated by love for her father and movingly has to face rejection from her gas-masked lover when he returns as liberator". The Stage reviewer opined that "Bonnie Wright, in her stage debut, is perfectly acceptable as the Girl".

In 2014, she took part in the third series of The Great Sport Relief Bake Off, winning the first episode and being named the "Star Baker".

In 2014, Wright co-starred opposite Rhys Wakefield, James D'Arcy and her Harry Potter co-star Freddie Stroma in the American Sci-fi film After the Dark (formerly known as The Philosophers), directed by John Huddles and began filming July 2011 in Jakarta, Indonesia. Wright played Georgina, one of the students. The film premiered at Neuchâtel International Fantastic Film Festival on 7 July 2013. The film was released on 7 February 2014.

In late 2014, she appeared in the short film How (Not) to Rob a Train as a bandit, and as the character Mia in the short film Sweat which is one of five film segments for the feature length anthology film Geography of the Heart about "the complexity of intimacy, shot in five international locations around the world." She voiced a character in the animated film My Dad Is Scrooge .

Wright has completed Abigail Schwarz's comedy Those Who Wander, produced by Nicola Scandiffio. and the adventure film Who Killed Nelson Nutmeg?.

In 2014, she signed on to co-star in Alexandra McGuinness's thriller The Highway is for Gamblers, with Nikki Reed, Joe Jonas, and Gustaf Skarsgård. The filming is scheduled to start in mid-November 2014 and is set in California's San Bernardino County.

She was named the winner of the Most Edgy Look Award at the 2011 Rodial Beautiful Awards. Also in 2011, Wright appeared in a fashion spread for The Financial Times' luxury lifestyle magazine How to Spend It. The shoot, which took place at the Victoria and Albert Museum, was dedicated to capturing the languor of Dante Rossetti's paintings.

Wright participated as a catwalk model for fashion designer Katie Eary at an Autumn/Winter 2011 show during London Fashion Week. In August 2013, Wright participated, along with Phoebe Collings James and Clara Paget, who teamed up with jeweller designer Dominic Jones modelling southsea deckchairs in aid of World Land Trust and Winchester School of Art charity.

Wright made her screenwriting and directorial debut for her graduation film Separate We Come, Separate We Go starring her Harry Potter co-star David Thewlis. The film premiered at the Cannes Film Festival short film corner and screen at the BAFTA Graduate.

Wright has her own production company, Bon Bon Lumiere.

In December 2013, Wright directed her After the Dark co-star Sophie Lowe, in her music video "Dreaming". The video was shot across Joshua Tree National Park. They filmed the video without any help, in the car of Lowe's friend. Wright filmed Lowe from the front seat of the car while Lowe was sitting in the back seat trying to create the feeling of drifting.

In July 2014, Wright directed the short film Fade to Gold for her jewellery-designer parents, Gary Wright and Sheila Teague, from Wright and Teague and LoveGold. The film showcases her parents' creative design of their jewellery, and there was a competition to win Wright's favourite pieces of Wright and Teague's jewellery.

In January 2016, Wright made an announcement on her verified Twitter account that her next directorial project is Medusa's Ankles, a short story by author A. S. Byatt.

In February 2016, she announced on her verified Twitter account that the Know Thyself film would premiere at the New Film Makers New York at the Anthology Film Archive on 10 February 2016.

Wright plays an active role in raising awareness around plastic pollution, particularly how it pollutes our oceans. In November 2017, she joined Greenpeace on their ship Arctic Sunrise, monitoring plastic waste in the oceans, and in January 2018 she visited the Coca-Cola Headquarters in Atlanta, Georgia, to hand-deliver a petition to urge them to stop producing single-use plastic. She has held public discussions on how the every-day person can reduce single-use plastic usage, and is active in advocating for these changes on her Instagram page. “Every piece of plastic I have ever used is still somewhere on this earth, and that’s terrifying,” says Wright.

Wright confirmed she was dating fellow Harry Potter actor Jamie Campbell Bower in February 2010, and their engagement in April 2011. Wright and Bower called off their engagement on 30 June 2012.