Bindi Sue Irwin (born 24 July 1998) is an Australian television personality and conservationist. When she was 9, Irwin hosted Bindi the Jungle Girl, a children's wildlife documentary TV series. She has also been involved in acting, singing, dancing, rapping, game show hosting, and has created two instructional fitness DVDs. She is also known for winning season 21 of Dancing with the Stars (US).

Bindi Irwin is one of the two children of the late conservationist and television personality Steve Irwin and his conservationist wife, Terri Irwin, who is currently the owner of the Australia Zoo. Bindi's younger brother is Robert Irwin, a television personality and photographer, and she is the granddaughter of naturalist and herpetologist Bob Irwin. In July 2019, she became engaged to Chandler Powell, an American professional wakeboarder from Florida. They were married in a private ceremony on 25 March 2020.

Bindi Irwin was born in Buderim, Queensland. Her first name comes from the name of her father's favourite female crocodile at the Australia Zoo, and her middle name, Sue, is from the family's late dog Sui, who died in her sleep from cancer on 23 June 2004 at the age of 15. According to her father, Bindi is an Nyungar language word that means "young girl".

She began appearing on television shows as early as age two. She appeared regularly in her father's television shows, including The Crocodile Hunter Diaries, and in the 2002 film The Wiggles: Wiggly Safari in a credited cast role. She is of English and Irish ancestry, with abundance of Irish ancestry on her father's side. Bindi stated herself being a dual citizen (Australian-American), in an interview with Brisbane Times: "What's really nice is being a dual citizen both here and in the US so I think I get to vote there as well."

Irwin was the presenter of a 26-part wildlife documentary kids show called Bindi the Jungle Girl, a production of the Discovery Kids television network. Her father was filmed in many of the early shows before his death in September 2006, when production was temporarily put on hold. The series premiered in June 2007 on Discovery Kids.

When Bindi was just a year old her grandmother Lyn Irwin died in a car accident on 11 February 2000. Bob has since remarried Judy Irwin. Bindi's father, Steve, was killed by a stingray barb on 4 September 2006 when she was eight years old. He was setting up to shoot ocean reef footage for a show that would include segments with himself, because weather prevented him from filming footage for a different show. Irwin and her mother announced that she would continue her late father's conservation and television work. Steve Irwin had said he supported Bindi's career, claiming "I just want to be co-star to my daughter".

On 20 September 2006, Irwin received a standing ovation after delivering a eulogy for her father in front of a crowd of 5,000 and a worldwide television audience of more than 300 million viewers. In the 2006 TV Week readers' poll, her speech received 43 percent of votes and was voted the television moment of the year. Her mother stated that, apart from some assistance with typing, Irwin had written the speech herself.

In June 2007, Irwin hosted a US television special about her father called My Daddy the Crocodile Hunter. She also released two child fitness DVDs. Bindi and The Crocmen sang "Trouble in the Jungle" on The Today Show in November 2007 and Irwin was learning how to play the piano.

In September 2006, at age 8, Irwin appeared on the cover of the Australian magazine New Idea, the youngest person to have done so in the magazine's 104-year history.

In early January 2007, Irwin appeared on The Ellen DeGeneres Show. At that time, she was also scheduled for appearances on the Late Show with David Letterman and an attendance with Russell Crowe at a major dinner. She was promoting her new video, Bindi Kid Fitness, and fulfilling her role as a newly appointed "tourism ambassador" for Australia. Later that month, Irwin appeared on Larry King Live, where she stated that creative writing was her favourite subject and maths her least favourite. She also said that she enjoyed being homeschooled because she and her teachers were such good friends.

Alongside George Lopez and Tyler James Williams, Irwin presented the award for "Favorite Male Singer" at the 2007 Kids' Choice Awards, which was won by the show's host Justin Timberlake. With help from Glenn Robbins, Irwin also presented the award for 'Most Outstanding Children's Show' at the Logie Awards of 2007, which was won by The Upside Down Show.

In late November of 2007, Irwin appeared with her mother Terri in the 81st Annual Macy's Thanksgiving Day Parade and performed songs from her album Trouble In The Jungle with The Crocmen on a jungle animal float.

On 4 May 2008, Irwin won the Most Popular New Female Talent Logie Award. Then on 13 June 2008, at the age of nine, she became the youngest performer ever to win a Daytime Emmy Award when she won the award for "Outstanding Performer in a Children's Series". The previous record was held by Camryn Grimes, who won the "Outstanding Younger Actress in a Drama Series" at age ten for her performance in The Young and the Restless.

In addition to singing and dancing Bindi has tried her hand at rapping.

Irwin commits 10% of her wages to Wildlife Warriors, the charity founded by her family in 2002.

She starred as Kirra in the movie Free Willy: Escape from Pirate's Cove, released on 23 March 2010.

In 2012, Irwin hosted a wildlife-themed game show called Bindi's Bootcamp. Filmed at Australia Zoo, the contestants were put through "adventure challenges" to educate and test their wildlife knowledge. It was produced in association with Sydney-based Sticky Pictures, under commission from ABC, and debuted in July on ABC3.

In 2012, Irwin appeared as Sunday Clovers on the episode "Mirror rorriM" of the Canadian television series, My Babysitter's a Vampire.

In 2013, Irwin made a brief appearance on the Australian TV series Big Brother to surprise housemate Tim, who had mentioned her several times throughout the series, saying "I want to thank you for being an incredible Wildlife Warrior. I hope when you're out of the house you can come visit me".

In March 2014, Irwin appeared on Good Morning America with her family, where she announced a partnership with animal theme park company SeaWorld. This decision was strongly criticized by animal rights group People for the Ethical Treatment of Animals, who criticized the Irwin family for supporting a company accused of animal abuse, referencing the documentary Blackfish.

In October 2014, Irwin was awarded Young Conservationist of the Year by the Australian Geographic Society.

In August 2015, Irwin was announced as a competitor on season 21 of the American reality television series Dancing with the Stars, paired with five-time champion Derek Hough. Since Irwin was a minor during the competition, she required special permission by California courts to perform. Irwin and Hough were declared the winners of the season on 24 November 2015.

On 1 April 2019, Irwin appeared as a guest judge during week 7 of Australian Dancing With The Stars season 16.

In July 2019, Irwin became engaged to Chandler Powell, an American professional wakeboarder from Florida. The couple first met at Australia Zoo in November 2013. On 25 March 2020, they married in a private ceremony at the Australia Zoo. Due to the 2020 Coronavirus pandemic, there were no guests.

Irwin, who was partnered with Derek Hough, won season 21 of Dancing with the Stars (U.S.) on 24 November 2015. Irwin and Hough held the record for the most perfect scores, with eight. This record was broken by Jordan Fisher in season 25.

The contents of this page are sourced from Wikipedia article on 25 Mar 2020. The contents are available under the CC BY-SA 4.0 license.
View Bindi Irwin 's image gallery
Image Gallery 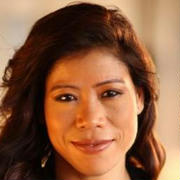 Leader in the Victorian Jewish community