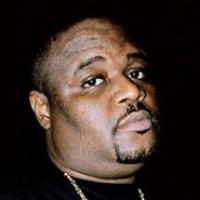 John Edward Hawkins (November 15, 1969 – May 1, 2006), better known by his stage names Big Hawk and H.A.W.K., was an American rapper from Houston, Texas and a founding member of the late DJ Screw's rap group the Screwed Up Click.

Born John Edward Hawkins in Houston, Texas on November 15, 1969, he grew up with a younger brother, Patrick "Fat Pat" Hawkins and two sisters. He started rapping in 1992 when Fat Pat took him to DJ Screw's house, an upcoming mixtape producer and DJ in the southern area of Houston. In April 2006 Hawk married his longtime girlfriend, Meshah Henderson. The couple had two sons.

In 1994 Hawk, Fat Pat, DJ Screw, Lil' Keke and Koldjack collaborated to form the group D.E.A. and Dead End Records (named for the dead end block of Martin Luther King Blvd where Hawk grew up in Houston). In late 1998 D.E.A. released an original independent album entitled, Screwed For Life featuring Lil' Keke, Big Pokey and the rest of the S.U.C. After the deaths of Hawk's brother (Fat Pat) and DJ Screw and the incarceration of many others SUC members, Hawk's ultimate mission and goal became keeping the "Ghetto Dream" alive. In 1999 Hawk participated in a Southside Playaz compilation album titled You Got Us Fuxxed Up, with Mike D, Claydoe and other members of the S.U.C. Hawk released his solo album, Under Hawk's Wings on Dead End Records in 2000 and had recorded with Lil' Flip, Lil' Keke, Big Moe, Z-Ro and was featured on the Lil' Troy hit "Wanna Be A Baller".

Big Hawk appeared on numerous mixtapes from artists in the Houston underground rap scene. After Screw's death in 2000, he was the main person responsible for keeping the S.U.C. together, so much so that his nickname was the Five Star General of the Screwed Up Click. He collaborated with Lil' O on the smash hit, "Back Back" Next, he partnered with Game Face Records in 2002 and released his first album under his label Ghetto Dreams Entertainment, self-titled, "HAWK". With the hit song, "U Already Know", the album charted the Billboard's list of top R&B and Rap Albums at no. 45. It was at Game Face Records where Hawk met and clicked with a young up and coming group called the GritBoyz and an artist named Starchy Archy. Hawk and Ghetto Dreams Ent. teamed up with Presidential Records in 2003 to release "A Bad Azz Mix Tape Vol. II." A year later he and Lil' Keke teamed up to release "Wreckin 2K4" with Presidential Records as well. It was around this time when the original S.U.C. members, along with M.J. (of Southside Studios) started collaborating on a group/compilation album titled "The Takeover". Trae tha Truth made an album dedicated to BIG HAWK called Life Goes On.

Hawk was featured on the popular single "Swang" by Trae that included a tribute to Fat Pat in 2005. In 2006, Hawk, along with Clint Dempsey of the U.S. National Soccer team recorded a song for Nike's "Joga Bonito" World Cup soccer promotion called "Don't Tread". He was part of Pepsi's Yahoo! "Houston Mic Pass" with Lil' Flip, Chamillionaire, Trae, Chingo Bling, Bun B, Short Dawg, Magno and Mike D. Since his death, Hawk has been featured on several tracks including Lil O's "I Do" single, "Down In Texas" off of the 2008 A.B.N. album It Is What It Is, and Big Unk's "I'ma Beast" to name a few.

On November 11, 2011, two posthumous singles were released called "Somebody Who Loves You" and "Praise God."

On May 1, 2006, Hawkins was shot dead outside of 12127 Redfern Drive, Houston, TX. He was pronounced dead at the scene. According to police, Hawkins had gone to the location to play Dominoes with a friend. He arrived before his friend and started to walk along the side of the house when an unknown suspect shot him multiple times. Police were unable to find any witnesses that could provide information on a suspect or a motive for the shooting. He died eight years after his brother Fat Pat was murdered.

Shortly after his death, a fellow Houston rapper named Bun B, in an interview with the Houston Chronicle, had the following to say about Hawkins: "There were no kinks in this man's moral armor, because he was a rapper, there will be people who will take his death the wrong way, but he was a peaceful guy and a family man who had no beefs with anybody".

The Grammy Awards are annual awards presented by The Recording Academy to recognize outstanding achievement in the mainly English-language music industry.

The contents of this page are sourced from Wikipedia article on 23 Jan 2020. The contents are available under the CC BY-SA 4.0 license.
View Big Hawk 's image gallery
Image Gallery