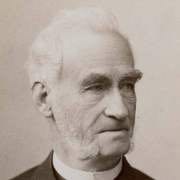 Bernhard Windscheid (July 26, 1817 in Düsseldorf – October 26, 1892, Leipzig) was a German jurist and a member of the pandectistic school of law thought.

He became famous with his essay on the concept of a legal action, which sparkled a debate with Theodor Muther that is said to have initiated the studies of the processal law as we know it today. Windscheid's thesis established the modern German law concept of Anspruch (roughly, a legally enforceable claim), distinguishing it from the Roman law concept of actio.

Additionally, Windscheid worked as a teacher at several universities in Germany and Switzerland, including Basel, Greifswald, München, Heidelberg, and Leipzig.

Bernhard Windscheid married the artist Auguste Eleanore Charlotte "Lotte" Pochhammer (1830-1918) on 4 November 1858. Four recorded children resulted from this marriage. The eldest, Käthe Windscheid (1859-1943) achieved prominence as a women's rights activist and as a pioneer of women's education. Franz Winscheid (1862-1910) was also something of a pioneer in his chosen field: he was a neurologist. The younger two children, Charlotte and Margarete, were twins.

The contents of this page are sourced from Wikipedia article on 08 Mar 2020. The contents are available under the CC BY-SA 4.0 license.
View Bernhard Windscheid 's image gallery
Image Gallery