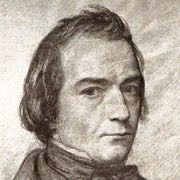 Neher began to study painting in 1822 in Stuttgart, under Johann Heinrich von Dannecker und Philipp Friedrich von Hetsch, but received his primary instruction at the Academy of Fine Arts Munich with Peter von Cornelius. This was followed by four years in Rome, where he cultivated contacts with the Nazarene movement, led by Friedrich Overbeck und Philipp Veit. In 1832, he returned to Munich, where he painted the huge fresco that adorns the arch of the Isartor, depicting the triumphal entry of Emperor Louis after his victory at the Battle of Mühldorf.

In 1836 he was summoned to Weimar, to decorate two rooms of the Grand Ducal Palace with murals. He worked there, off and on, for eleven years. In 1841, he became Director of the Academy of Visual Arts in Leipzig. He was later induced to return to Stuttgart, where he became a Professor at the Royal Art School. He was promoted to Director in 1854, but continued to produce many large oil paintings, mostly on religious subjects.

Arguably, however, his best work involved a series of large glass paintings for stained-glass windows; six for the Stiftskirche, three for the chapel in the Old Castle and one each for the Leonhardskirche, the Greek Chapel in the New Castle and the Johanneskirche.

In 1852, he was awarded the Knight's Cross, First Class of the Order of the Crown (Württemberg), which conferred a title of nobility. In 1878, The Staatsgalerie Stuttgart acquired the frames and designs for his windows. He resigned his position as Director in 1879.

The contents of this page are sourced from Wikipedia article on 09 Mar 2020. The contents are available under the CC BY-SA 4.0 license.
View Bernhard von Neher 's image gallery
Image Gallery