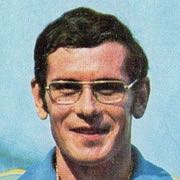 Bernhard "Bernd" Kannenberg (born 20 August 1942) is a retired West German race walker who won the 50 km event at the 1972 Summer Olympics. He also competed in the 20 km at the 1972 and 1976 Games, but failed to finish. In 1972 Kannenberg became the first German athlete to walk 50 km within 4 hours; the same year he was awarded the Silbernes Lorbeerblatt. During his career he set five world records, and won six outdoor and four indoor West German titles.

Kannenberg was a professional soldier and trained at the sports school of the German Bundeswehr at Warendorf. After retiring from competitions he coached the German race walking team.

The contents of this page are sourced from Wikipedia article on 08 Mar 2020. The contents are available under the CC BY-SA 4.0 license.
View Bernd Kannenberg 's image gallery
Image Gallery