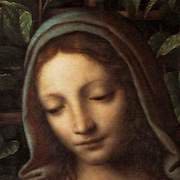 Bernardino Luini (c. 1480/82 – June 1532) was a North Italian painter from Leonardo's circle during the High Renaissance. Both Luini and Giovanni Antonio Boltraffio were said to have worked with Leonardo directly; he was described as having taken "as much from Leonardo as his native roots enabled him to comprehend". Consequently, many of his works were attributed to Leonardo. He was known especially for his graceful female figures with elongated eyes, called Luinesque by Vladimir Nabokov.

Luini was born as Bernardino de Scapis in Runo, a frazione of Dumenza, near Lake Maggiore. Details of his life are scant.

In 1500 he moved to Milan with his father. According to Lomazzo, he trained under Giovan Stefano Scotto, although for others he was a pupil of Ambrogio Bergognone. In 1504-1507 he was probably in Treviso, as attested by a Madonna with Child signed Bernardinus Mediolanensis faciebat which is however of disputed attribution. His first fresco works are an Adoration of the Magi in San Pietro of Luino (c. 1505) and the attributed fresco in the presbytery of Monza Cathedral with St. Gerard of the Painters.

Luini returned to Milan in 1509, receiving a commission for a polyptych from which today onlySt. Anthony of Padua in the Museo Poldi Pezzoli, influenced by Bernardino Zenale's Cantù Polyptych remains. In the 1510s he painted frescoes in the Oratory of Santa Maria Nuova in Pilastrello, a Lamentation of the dead Christ in Santa Maria della Passione, a Madonna della Buonanotte in the Abbey of Chiaravalle, frescoes in San Giorgio di Palazzo (1516) and in the Certosa di Pavia, and others.

From 1509 to 1514 Luini completed the frescoes for the Villa Pelucca in Sesto San Giovanni (now in the Pinacoteca di Brera, Milan). One of his best known works, they were commissioned by Girolamo Rabia, for whom he also painted mythological scenes in the Palazzo Rabia (now in the Berlin Gemäldegalerie and the National Gallery of Art, Washington, D.C.).

In 1521 he travelled to Rome, where he was influenced by Raphael's style. This is evident in Luini's subsequent frescoes in the Villa La Pelucca executed between 1520 and 1523, as well as in other works now at the Brera. In 1523, Luini painted a polyptych depicting the Enthroned Madonna and Child surrounded by Angels with Musical Instruments, and surmounted by God the Father, found in the Basilica of San Magno, Legnano.

Around 1525 he completed a series of frescoes on the life of the Virgin and Christ for the sanctuary of Santa Maria dei Miracoli in Saronno; the fresco in the counterfaçade of Sant'Abbondio in Como was painted the same year. According to legend, he instigated the discovery of amaretto while at Saronno. Other works from his middle period include a Holy Family in the Museo del Prado, two Salome in the Museum of Fine Arts in Boston and the Uffizi and a Portrait of a Lady in the National Gallery of Art. AVirgin with Child and Saints from 1526 is in the Lee Fareham collection of Richmond.

In 1529 Luini completed one of his masterworks, the grand Passion and Crucifixion fresco at Santa Maria degli Angeli in Lugano, paired with other works in the same church. In 1531 he returned to the Saronno sanctuary to complete other frescoes. Later in his career, Luini was increasingly influenced by Leonardo, as shown by the St. Anne in the Pinacoteca Ambrosiana and the St. Catherine in the Hermitage.

He died in Milan. His son Aurelio was also an accomplished painter.

At least one prominent art scholars believes that the painting Salvator Mundi (Leonardo) was not painted by the master but mostly by assistants such as Luini; in fact, art historian Matthew Landrus maintained that the master was responsible for only about five to 20% of the work and that Luini was the "primary painter".

The contents of this page are sourced from Wikipedia article on 06 Mar 2020. The contents are available under the CC BY-SA 4.0 license.
View Bernardino Luini 's image gallery
Image Gallery 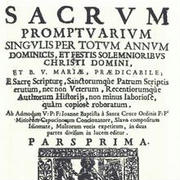