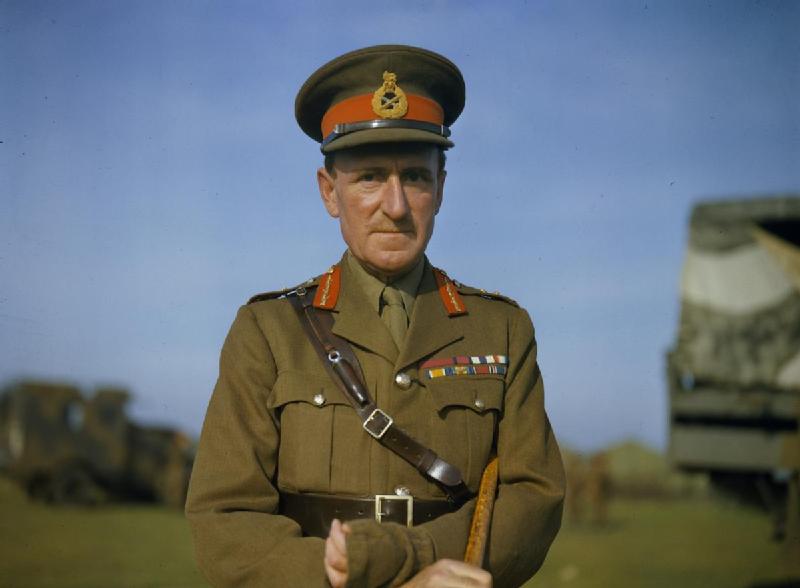 General Sir Bernard Charles Tolver Paget GCB, DSO, MC (15 September 1887 – 16 February 1961) was a senior British Army officer who served both in the First World War and the Second World War. In the Second World War he commanded the 21st Army Group from June to December 1943 and was Commander-in-Chief, Middle East Command from January 1944 to October 1946.

Paget was born in Oxford, Oxfordshire, the son of the Right Reverend Francis Paget, second son of Sir James Paget, 1st Baronet, and was educated at Shrewsbury School and at the Royal Military College, Sandhurst from 1905–1907. Paget was commissioned as a second lieutenant into the Oxfordshire and Buckinghamshire Light Infantry, British Army, in November 1907 and was promoted to lieutenant in 1910. On the outbreak of the First World War (1914–1918) in August 1914 he was appointed adjutant of the new 5th (Service) Battalion, composed mainly of volunteers for Kitchener's Army, with which he went to the Western Front in May 1915. The battalion was serving as part of the 42nd Brigade, itself part of the 14th (Light) Division. Paget was awarded the Military Cross in November 1915, and the Distinguished Service Order in January 1918. He was four times mentioned in despatches and wounded in action five times during the First World War.

The war came to an end in November 1918 and, during the interwar period, he remained in the British Army. Having been made brevet major in 1917, he was promoted to major in 1924 and brevet lieutenant colonel the following year. Paget was promoted to colonel in 1929 and became Commander of the depot at Cowley Barracks, Oxford in 1930. He was Chief Instructor at the Staff College, at Quetta, British India (now the Command and Staff College, Pakistan), from 1932–1934. Paget commanded the 4th Quetta Infantry Brigade from 1936–1937. He was promoted to major general in December 1937 and was Commandant of the Staff College, Camberley between 1938 and 1939.

In late November 1939, nearly three months after the outbreak of the Second World War (1939–1945), Paget took over as General Officer Commanding (GOC) of the 18th Infantry Division, a recently raised Territorial Army (TA) formation, relinquishing command in mid-May 1940. In the acting rank of lieutenant general he commanded British forces in the withdrawal at Åndalsnes in Norway in 1940 during the Norwegian Campaign, and was subsequently appointed a Companion of the Order of the Bath. He was promoted to lieutenant general and made General Officer Commanding-in-Chief (GOC-in-C) South-Eastern Command in 1941. He was knighted as a Knight Commander of the Order of the Bath in the New Year's Honours' List at the end of the year. He went on to be GOC of GHQ Home Forces in the acting rank of general in December 1941. The rank of general was made permanent in July 1943. Paget commanded the 21st Army Group in the United Kingdom from June to December 1943 prior to General Bernard Montgomery taking over. In January 1944 he became Commander-in-Chief (C-in-C), Middle East Command until October 1946, when he retired from the army. In December 1944 he was awarded the Grand Cross of the Order of Polonia Restituta by the Polish government-in-exile. In 1946 he was advanced to Knight Grand Cross of the Order of the Bath.

After the war Paget was Colonel Commandant of the Oxfordshire and Buckinghamshire Light Infantry from October 1946 to September 1955 and Governor of the Royal Hospital Chelsea from 1949 to 1956. He lived in Petersfield, Hampshire.

He married Winifred Nora Paget on 7 February 1918 with whom he was to have two sons. His younger son, Lieutenant Tony Paget died on 5 March 1945 from wounds received while serving with the 1st Battalion, Oxfordshire and Buckinghamshire Light Infantry (the 43rd) during the Battle of the Reichswald. He received the Distinguished Service Order for his gallantry during the battle.