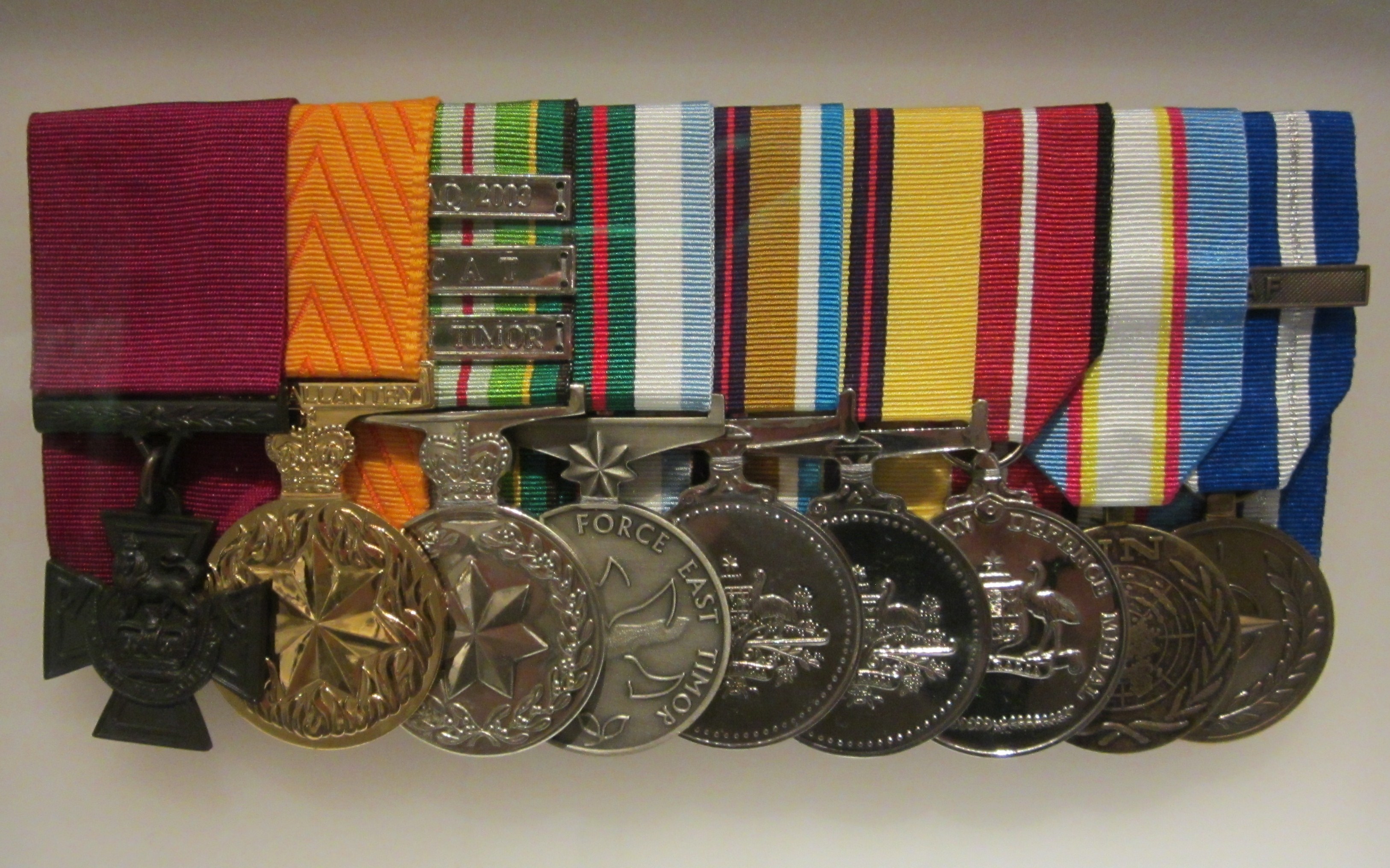 Benjamin "Ben" Roberts-Smith, VC, MG (born 1 November 1978) is an Australian businessman, former Australian Army soldier, and a recipient of the Victoria Cross for Australia (VC), the highest award in the Australian honours system. Roberts-Smith was awarded the VC for his actions during a helicopter assault into Tizak on 11 June 2010 as part of an offensive in the Shah Wali Kot region while serving with the Special Air Service Regiment in Afghanistan. The medal, together with his Medal for Gallantry awarded during a tour of Afghanistan in 2006, made Roberts-Smith the most highly decorated member of the Australian Defence Force. He was presented with the VC by the Governor-General of Australia, Quentin Bryce, at a ceremony in Perth on 23 January 2011. He was also later awarded a Commendation for Distinguished Service for his leadership as a patrol commander during a 2012 tour of Afghanistan.
Roberts-Smith left the full-time army in 2013 to study business at the University of Queensland. In 2015 he was appointed Chair of the National Australia Day Council, and made deputy general manager of the regional television network Seven Queensland. He has subsequently been promoted to general manager of the rural network and of metropolitan station Seven Brisbane.

Roberts-Smith joined the Australian Army in 1996. After completing his initial training at Lone Pine Barracks in Singleton, New South Wales, he was posted to the 3rd Battalion, Royal Australian Regiment (3 RAR). Initially part of a rifle company, he subsequently became section commander in the Direct Fire Support Weapons Platoon.

With 3 RAR, Roberts-Smith was deployed to East Timor twice, the first time as part of the International Force for East Timor in 1999.

After completing the Special Air Service Regiment (SASR) selection course in 2003, and completing the SASR reinforcement cycle, Roberts-Smith was posted to 3 Squadron. With 3 Squadron, he was a member of training and assistance teams throughout South-East Asia, and also took part in operations off Fiji in 2004. He was also part of personal security detachments in Iraq throughout 2005 and 2006. Roberts-Smith was deployed to Afghanistan on six occasions, in 2006, 2007, 2009, 2010 and 2012.

The following are extracts from the citations of the Department of Defence for Roberts-Smith's two awards for gallantry.

On 31 May 2006, Lance Corporal Roberts-Smith was employed as a patrol scout and sniper that was tasked with establishing an observation post near the Chora Pass in Oruzgan province, Afghanistan. On 2 June, the observation post had become the focus of the Anti-Coalition Militia force and repeated attempts to locate and surround the position ensued. In one particular incident the Militia attempted to outflank the observation post. Roberts-Smith was part of a two man team tasked to move out of their relatively secure position in order to locate and neutralise the Militia and regain the initiative. This task was successfully achieved.

In another incident, two Anti-Coalition Militia attempted to attack the observation post from a different flank, Roberts-Smith again moved to support and neutralise one of these Militia. Roberts-Smith then realised that the forward edge of the observation post was not secure and made the decision to split the team and take up an exposed position forward of the patrol so he could effectively employ his sniper weapon. Whilst isolated, and in his precarious position, he observed a group of sixteen Anti-Coalition Militia advancing across open ground towards the observation post. Roberts-Smith effectively employed his sniper rifle to stop their advance whilst receiving very accurate small arms fire from another group of Militia to his flank. Roberts-Smith maintained the initiative and ensured that his patrol remained secure by holding this position without support for twenty minutes. He was eventually reinforced by his original team member and together they continued to hold off the Militia advance for a further twenty minutes until offensive air support arrived.

On 11 June 2010, a troop of the Special Operations Task Group conducted a helicopter assault into Tizak, Kandahar province, in order to capture or kill a senior Taliban commander.

Immediately upon the helicopter insertion, the troop was engaged by machine gun and rocket propelled grenade fire from multiple, dominating positions. Two soldiers were wounded in action and the troop was pinned down by fire from three machine guns in an elevated fortified position to the south of the village. Under the cover of close air support, suppressive small arms and machine gun fire, Roberts-Smith and his patrol manoeuvred to within 70 metres of the enemy position in order to neutralise the enemy machine gun positions and regain the initiative.

Upon commencement of the assault, the patrol drew very heavy, intense, effective and sustained fire from the enemy position. Roberts-Smith and his patrol members fought towards the enemy position until, at a range of 40 metres, the weight of fire prevented further movement forward. At this point, he identified the opportunity to exploit some cover provided by a small structure.

As he approached the structure, Roberts-Smith identified an insurgent grenadier in the throes of engaging his patrol. Roberts-Smith engaged the insurgent at point-blank range resulting in the death of the insurgent. With the members of his patrol still pinned down by the three enemy machine gun positions, he exposed his own position in order to draw fire away from his patrol, which enabled them to bring fire to bear against the enemy. His actions enabled his Patrol Commander to throw a grenade and silence one of the machine guns. Seizing the advantage, and demonstrating extreme devotion to duty and the most conspicuous gallantry, Roberts-Smith, with a total disregard for his own safety, stormed the enemy position killing the two remaining machine gunners.

His act of valour enabled his patrol to break into the enemy position and to lift the weight of fire from the remainder of the troop who had been pinned down by the machine gun fire. On seizing the fortified gun position, Corporal Roberts-Smith then took the initiative again and continued to assault enemy positions in depth during which he and another patrol member engaged and killed further enemy. His acts of selfless valour directly enabled his troop to go on and clear the village of Tizak of Taliban. This decisive engagement subsequently caused the remainder of the Taliban in Shah Wali Kot district to retreat from the area.

On receiving the award, Roberts-Smith said he was honoured and humbled;

I am so very proud to have taken part in the action with my mates. This award also belongs to them and to the Regiment. To my family, my beautiful wife Emma and our baby girls, Eve and Elizabeth, thank you for your enduring support and encouragement.

Roberts-Smith noted that he—and the ADF—expected to be able to continue to fight as a frontline patrol commander following the receipt of the Victoria Cross. He said that "[O]nce you reach patrol commander, that is the pinnacle for an SAS operator. You are now the man."

In October 2013, Roberts-Smith formally announced that he was leaving the full-time Army for a career in business, but will continue to serve in the Army Reserve. In a press conference, Roberts-Smith stated that he was studying a Masters of Business Administration at the University of Queensland, and intended to pursue a corporate career.

On 26 January 2014, Roberts-Smith was awarded the Commendation for Distinguished Service as part of the 2014 Australia Day Honours. The award arose from a 2012 tour of Afghanistan, in which Roberts-Smith "distinguished himself as an outstanding junior leader on more than 50 high risk" operations.

He is presently Chair of the National Australia Day Council, an Australian Government–owned social enterprise.

In 2015, Roberts-Smith recorded "Lest We Forget" with Lee Kernaghan for his album Spirit of the Anzacs.

Roberts-Smith was born and attended school in Western Australia.

Roberts-Smith is married to Emma and they have twin daughters, Eve and Elizabeth, who were aged five months at the time he was presented with his Victoria Cross for Australia medal.

He is a member of the Hale School class of 1995, and was named the number-one ticket holder of "Fremantle Dockers" (AFL) Football Club in March 2012.

His brother, Sam, is an opera singer who graduated from the Western Australian Academy of Performing Arts, and from 2015 into 2016 sang with The Ten Tenors.

Medals on display at the Australian War Memorial. (Note that this display does not include his full entitlement.)

Roberts-Smith was named Australian Father of the Year in 2013.