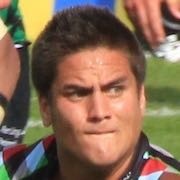 The son of the New Zealand international Frano Botica, he played rugby at school and was selected to play for the New Zealand Schoolboys team. In 2008, he spent a year in France where he played with the Espoirs (Academy) team of Biarritz Olympique.

He then returned to New Zealand where he joined North Harbour. He played his first professional match in August 2009 against Southland in the Air New Zealand Cup. In 2011, he narrowly missed out on selection for the Auckland Blues franchise and the chance to play in Super Rugby. He returned to France where he played the 2011-2012 Pro D2 season with CA Périgueux.

Late in the season, it was announced that he had signed a two-year contract with Harlequins although he actually signed in October 2011. As a British passport holder, he did not count as a foreign player. In his initial season with Harlequins, he was the top points scorer (with 78) in the LV Cup.

The contents of this page are sourced from Wikipedia article on 07 Mar 2020. The contents are available under the CC BY-SA 4.0 license.
View Ben Botica 's image gallery
Image Gallery