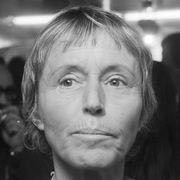 Beate Uhse-Rotermund ([beˈaːtə ˈʔuːzə ˈʁoːtɐmʊnt] (); born Beate Köstlin [ˈkœstliːn] October 25, 1919 – July 16, 2001) was a German pilot and entrepreneur. The only female stunt pilot in Germany in the 1930s, after World War II she started the first sex shop in the world. The company she started, Beate Uhse AG, is listed on the Frankfurt Stock Exchange.

Uhse was born in Wargenau, a neighborhood of Cranz, East Prussia (now Zelenogradsk, Russia). She was the youngest of three children of the farmer Otto Köstlin and the doctor Magarete Köstlin (one of the first five female doctors in Germany).

When she was eight years old, her older brother told her the myth of Icarus. Beate was fascinated by the story, and by the idea of flying—so much so that she gathered chicken feathers and glued together some wings and jumped from her parents' veranda. Beate was a wild child. Her parents did not try to control her; instead they encouraged their daughter in her interests and desires. They assisted her in getting a good education. They informed their children on sexual matters early, and spoke with them openly about sexuality and contraception. At fifteen Beate became the Hessian javelin champion.

At the age of sixteen Beate Köstlin went to England for a year, to learn English as an au pair. Afterwards, she returned to her parents' home where, to satisfy her parents, she obtained a "proper" education (in Home Economics). During a trip to Berlin, her father met a Mr. Sachsenberg, a lecturer on motor sports from the German Aero-Club (a nonprofit organization dedicated to flying), and complained to him of his "flying-crazy" daughter and the "nonsensical" concept of a female pilot. Sachsenberg was, instead, excited by the idea, and sent the seventeen-year-old Beate information about obtaining a pilot's license.

Finally her parents gave in to her demands, and in 1937 Beate joined the Rangsdorf pilot school near Berlin. In October, on her 18th birthday, she received her pilot's license. In 1938 she passed the stunt pilot exam, and shortly thereafter competed in a race in Belgium. She won in her category, and also won 2nd place overall in target landing and 3rd in "punctual flight."

She then worked for the Bücker aircraft company in Rangsdorf as a test pilot and subsequently, at age nineteen, as a delivery pilot for the Alfred Friedrich aircraft concern in Strausberg, east of Berlin. Soon afterwards, she was asked by the UFA film company to work as a stunt double in films. She worked with Hans Albers, a film star she particularly admired, and with numerous others. In the German propaganda movie Achtung – Feind hört mit she performed a stunt as a double for German actor René Deltgen, in which she flew through a balloon barrier and simulated an uncontrolled dive.

Beate fell in love with her stunt-piloting instructor, Hans-Jürgen Uhse, but repeatedly rejected his proposals of marriage. She swore she would "never ever give up flying for a man." Since Hans-Jürgen strongly supported her ambitions, however, she finally accepted, but her father resisted. For one whole year, her father refused to bless their union. Finally, a festive wedding was scheduled for October 10, 1939. However, it had to be canceled because of the beginning of the Second World War. On September 28, Hans-Jürgen Uhse was to be posted; the couple married quietly four hours before his departure.

During the war stunt piloting became impossible, and Beate Uhse was grounded. In her small home in Rangsdorf she felt claustrophobic, and so she accepted an offer by the Luftwaffe to work in an aircraft ferrying unit. Thus, she was occasionally also able to fly combat aircraft that she otherwise would not be allowed to fly: the Junkers Ju 87 Stuka, the Messerschmitt Bf 109 and 110, the Focke-Wulf Fw 190 and at the end of the war even the Messerschmitt Me 262, the world's first operational jet fighter. Although attacked several times by allied aircraft she continued as she felt that after the war, with this experience, she would be able to have a career as a pilot.

In 1943, her son Klaus was born. After the birth, she was permitted to continue flying because she was in a role considered vital to the war effort, and she received permission to hire a nanny.

In October 1944, she was promoted to the rank of captain and was assigned to the Überführungsgeschwader 1 (Ferry Squadron 1) based in Berlin-Staaken.

In 1945, her husband Hans-Jürgen died in an air crash, leaving Beate a 24-year-old widow with a year-old son.

In April 1945, Berlin was surrounded by Soviet forces. The commander of Uhse's squadron wanted to move the battalion west. Uhse made her way through the ravaged city to her house in Rangsdorf and picked up her son and his nanny, but when she brought them to the airport, her unit had already left, along with her airplane. She found a small Siebel Fh 104 plane that did not have a pilot, and while it was being fueled she studied the plane's manual, as she had never flown this type. Together with two injured – her son and the nanny - she left embattled Berlin flying northwest, finally landing in Leck in North Friesland. There she was captured by British forces.

After her release, she settled in Flensburg, in what would become West Germany, with her son.

In the early postwar period, former members of the Luftwaffe were not permitted to fly, and Uhse's aviation career ended. First, she made a living on the black market. She was selling products door-to-door and met many housewives and learned of their problems: former soldiers returning from the war were making their wives pregnant, not caring that there was "no apartment, no income and no future" for any children. Many of the women went to untrained abortionists. Uhse remembered lectures her mother (who had died during the war) had given her on sexuality, sexual hygiene and contraception. She searched for information on the Knaus-Ogino rhythm method of contraception, and put together a brochure which explained to the women how to identify their fertile and infertile days.

By 1947, she had sold 32,000 copies of "Pamphlet X" via her "Betu" mail order company, and began to expand to larger cities such as Hamburg and Bremen. Many people wrote her letters asking for advice on sexuality and eroticism. "These people were unaware of the facts of life," she wrote in her autobiography. Soon she was also selling condoms and "marriage guides."

In 1962, in Flensburg, she opened her "speciality store for marital hygiene" largely focused on sexuality, thus considered as the first sex shop. She offered, both in her store and her catalog, more "articles for marital hygiene." Soon the police began acting against the items in her store which supposedly served to "inflame and satisfy lustful desires in a manner contrary to decency and morality." By 1992, her store had been indicted more than 2,000 times. She was also discriminated against by other organizations, including the "Börsenverein des Deutschen Buchhandels" (a financial organization of the German book industry), which refused to admit her publishing house due to "moral concerns." The Flensburger tennis club refused to admit her due to "general concerns."

The Beate Uhse business continues to trade throughout Europe under the names Beate Uhse, Pabo and Adam et Eve. It went into administration on multiple occasions, most recently in July 2019, owing money to Google for its Pay Per Click advertising.

Uhse died of pneumonia in a clinic in St. Gallen, Switzerland, in 2001.

Uhse was one of the most important people for sexual liberation in the German-speaking world. In 1989 she received the "Bundesverdienstkreuz" (German Cross of Merit).

The contents of this page are sourced from Wikipedia article on 08 Mar 2020. The contents are available under the CC BY-SA 4.0 license.
View Beate Uhse-Rotermund 's image gallery
Image Gallery