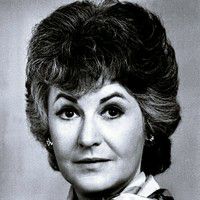 Beatrice Arthur (born Bernice Frankel; May 13, 1922 – April 25, 2009), also known as Bea Arthur, was an American actress, comedian, singer, and animal rights activist. Her career spanned seven decades.
Arthur achieved fame as the character Maude Findlay on the 1970s sitcoms All in the Family (1971–72) and Maude (1972–78), and as Dorothy Zbornak on the 1980s sitcom The Golden Girls (1985–92), winning Emmy Awards for both roles. A stage actress both before and after her television success, she won the Tony Award for Best Featured Actress in a Musical for her performance as Vera Charles in the original cast of Mame (1966).

Beatrice Arthur was born Bernice Frankel on May 13, 1922, to Rebecca (née Pressner) and Philip Frankel in New York City. Arthur was raised in a Jewish home with sisters Gertrude and Marian Kay. In 1933, the Frankel family relocated to Cambridge, Maryland, where her parents subsequently operated a women's clothing shop. She attended Linden Hall School for Girls, an all-girls' boarding school in Lititz, Pennsylvania, before enrolling at Blackstone College for Girls in Blackstone, Virginia, where she was active in the school's drama program.

During World War II, she worked as a truck driver and typist in the United States Marine Corps Women's Reserve, receiving an Honorable Discharge in September 1945. From 1947, Arthur studied at the Dramatic Workshop of The New School in New York with German director Erwin Piscator. Arthur began her acting career as a member of an off Broadway theater group at the Cherry Lane Theatre in New York City in the late 1940s. On stage, her roles included Lucy Brown in the 1954 Off-Broadway premiere of Marc Blitzstein's English-language adaptation of Kurt Weill's The Threepenny Opera, Nadine Fesser in the 1957 premiere of Herman Wouk's Nature's Way at the Coronet Theatre, Yente the Matchmaker in the 1964 premiere of Fiddler on the Roof on Broadway, and a 1966 Tony Award-winning portrayal of Vera Charles to Angela Lansbury's Mame. She reprised the role in the unsuccessful 1974 film version opposite Lucille Ball. In 1981, she appeared in Woody Allen's The Floating Light Bulb.

She made her debut at the Metropolitan Opera in 1994 portraying the Duchess of Krakenthorp, a speaking role, in Gaetano Donizetti's La fille du régiment.

In 1971, Arthur was invited by Norman Lear to guest-star on his sitcom All in the Family, as Maude Findlay, the cousin of Edith Bunker. An outspoken liberal feminist, Maude was the antithesis to the conservative Republican Archie Bunker, who described her as a "New Deal fanatic". Nearly 50, Arthur's tart turn appealed to viewers and to executives at CBS, who, she would later recall, asked "'Who is that girl? Let's give her her own series.'" That series, previewed in her second All in the Family appearance, would be simply titled "Maude". The show, debuting in 1972, found her living in the affluent community of Tuckahoe, Westchester County, New York, with her fourth husband Walter (Bill Macy) and divorced daughter Carol (Adrienne Barbeau). Her performance in the role garnered Arthur several Emmy and Golden Globe nominations, including her Emmy win in 1977 for Outstanding Lead Actress in a Comedy Series. Maude would also earn a place for Arthur in the history of the women's liberation movement. The groundbreaking series addressed serious sociopolitical topics of the era that were considered taboo for a sitcom, including the Vietnam War, the Nixon Administration, Maude's bid for a Congressional seat, divorce, menopause, drug use, alcoholism, nervous breakdown, mental illness, gay rights, abortion, and spousal abuse. A prime example is "Maude's Dilemma", a two-part episode airing near Thanksgiving of 1972 in which Maude's character grapples with a late-life pregnancy, ultimately deciding to have an abortion.

Even though abortion was legal in New York State, it was illegal in many other regions of the country, and as such sparked controversy. As a result, dozens of affiliates refused to broadcast the episode when it was originally scheduled, substituting either a repeat from earlier in the season or a Thanksgiving TV special in its place. However, by the time of the summer rerun season six months later all the flak had died down, and the stations that refused to air the episode upon its first run reinstated it for the reruns the following summer. As a result, a reported 65 million viewers watched the two episode arc either in their first run that November or during the following summer as a rerun.

The episode initially aired two months before the U.S. Supreme Court legalized the procedure nationwide in the Roe v. Wade outcome in January 1973. By 1978, however, Arthur decided to move on from the series. Later the same year (1978), she costarred in Star Wars Holiday Special, in which she had a song and dance routine in the Mos Eisley Cantina. She hosted The Beatrice Arthur Special on CBS on January 19, 1980, which paired the star in a musical comedy revue with Rock Hudson, Melba Moore and Wayland Flowers and Madame.

After appearing in the short-lived 1983 sitcom Amanda's (an adaptation of the British series Fawlty Towers), Arthur was cast in The Golden Girls in 1985, in which she played Dorothy Zbornak, a divorced substitute teacher living in a Miami house owned by Blanche Devereaux (Rue McClanahan). Her other roommates included widow Rose Nylund (Betty White) and Dorothy's Sicilian mother, Sophia Petrillo (Estelle Getty). Getty was actually a year younger than Arthur in real life, and was heavily made up to look significantly older. The series was a hit, and remained a top-ten ratings fixture for six of its seven seasons. Her performance led to several Emmy nominations over the course of the series and an Emmy win in 1988. Arthur decided to leave the show after seven years, and in 1992 the show was moved from NBC to CBS and retooled as The Golden Palace in which the other three actresses reprised their roles, with Cheech Marin as their new foil. Arthur made a guest appearance in a two-part episode, but the new series lasted only one season. Arthur sporadically appeared in films, reprising her stage role as Vera Charles in the 1974 film adaption of Mame, opposite Lucille Ball. She portrayed overbearing mother Bea Vecchio in Lovers and Other Strangers (1970), and had a cameo as a Roman unemployment clerk in Mel Brooks' History of the World, Part I (1981). She appeared in the 1995 American movie For Better or Worse as Beverly Makeshift.

After Arthur left The Golden Girls, she made several guest appearances on television shows and organized and toured in her one-woman show, alternately titled An Evening with Bea Arthur as well as And Then There's Bea. She made a guest appearance on the American cartoon Futurama, in the Emmy-nominated 2001 episode "Amazon Women in the Mood", as the voice of the Femputer who ruled the giant Amazonian women. She appeared in a first-season episode of Malcolm in the Middle as Mrs. White, one of Dewey's babysitters. She was nominated for an Emmy for Outstanding Guest Actress in a Comedy Series for her performance. She also appeared as Larry David's mother on Curb Your Enthusiasm.

In 2002, she returned to Broadway, starring in Bea Arthur on Broadway: Just Between Friends, a collection of stories and songs (with musician Billy Goldenberg) based on her life and career. The show was nominated for a Tony Award for Best Special Theatrical Event.

In addition to appearing in a number of programs looking back at her own work, Arthur performed in stage and television tributes for Jerry Herman, Bob Hope, Ellen DeGeneres and Peggy Lee, in Richard Barone's "There'll Be Another Spring: A Tribute to Miss Peggy Lee" at the Hollywood Bowl in 2004. In 2005, she participated in the Comedy Central roast of Pamela Anderson, where she recited sexually explicit passages from Anderson's book Star Struck in a deadpan fashion.

In 1999, Arthur told an interviewer of the three influences in her career: "Sid Caesar taught me the outrageous; [method acting guru] Lee Strasberg taught me what I call reality; and [original Threepenny Opera star] Lotte Lenya, whom I adored, taught me economy." Arthur was married twice. Her first marriage took place during her time in the military, when she married fellow Marine Robert Alan Aurthur, a screenwriter, television, and film producer and director, whose surname she took and kept (though with a modified spelling). Shortly after they divorced in 1950, she married director Gene Saks with whom she adopted two sons, Matthew (born in 1961), an actor, and Daniel (born in 1964), a set designer; they remained married until 1978.

In 1972, she moved to Los Angeles and sublet her apartment on Central Park West in New York City and her country home in Bedford, New York.

In a 2003 interview, in London promoting her one-woman show, similar to The Vagina Monologues, she described the British capital as her "favourite city in the world".

Arthur was a committed animal rights activist and frequently supported People for the Ethical Treatment of Animals campaigns. Arthur joined PETA in 1987 after a Golden Girls anti-fur episode. Arthur wrote letters, made personal appearances and placed ads against the use of furs, foie gras, and farm animal cruelty by KFC suppliers. In Norfolk, Virginia, near the site of the PETA headquarters, there is a dog park named the Bea Arthur Dog Park in her honor.

Arthur was a longtime champion of civil rights for women, the plight of LGBT, the elderly, and the Jewish communities, in her two major television roles and through her charity work and personal outspokenness.

Regarding politics, Arthur herself was a liberal Democrat who confirmed her views by saying, "I've been a Democrat my whole life. That's what makes Maude and Dorothy so believable, we have the same viewpoints on how our country should be handled."

Bea Arthur died at her home in the Sullivan Canyon section of Brentwood in the early morning hours of Saturday, April 25, 2009. Her family acknowledged the cause of death was cancer, but declined to specify what type. She was survived by her two sons and two granddaughters. Her body was cremated and the ashes were scattered about Miami.

On April 28, 2009, the Broadway community paid tribute to Arthur by dimming the marquees of New York City's Broadway theater district in her memory for one minute at 8:00 pm.

Arthur's co-stars from The Golden Girls, Rue McClanahan and Betty White, commented on her death via telephone on an April 27 episode of Larry King Live. On the Today Show by phone, McClanahan said she and Arthur got along together "like cream". White said, "I knew it would hurt, I just didn't know it would hurt this much."

Longtime friends Adrienne Barbeau (with whom she had worked on Maude) and Angela Lansbury (with whom she had worked in Mame) reflected on her death. Barbeau said, "We've lost a unique, incredible talent. No one could deliver a line or hold a take like Bea and no one was more generous or giving to her fellow performers". Lansbury said, "She became and has remained my bosom buddy [...] I am deeply saddened by her passing, but also relieved that she is released from the pain".

Arthur bequeathed $300,000 to the Ali Forney Center, a New York City organization that provides housing for homeless LGBT youths. The center was heavily damaged in October 2012 by Hurricane Sandy, but has since been restored and re-opened. The Bea Arthur Residence is an 18-bed residence in Manhattan for homeless LGBT youth operated by the Ali Forney Center. After several delays, the center is slated to open in February 2017. Arthur won the American Theatre Wing's Tony Award in 1966 as Best Featured Actress in a Musical for her performance that year as Vera Charles in the original Broadway production of Jerry Herman's musical Mame.

On June 8, 2008, The Golden Girls was awarded the Pop Culture award at the Sixth Annual TV Land Awards. Arthur (in one of her final public appearances) accepted the award with McClanahan and White.