Barbara Steele (born 29 December 1937) is a British film actress and producer. Famous for her starring in Italian Gothic horror films of the 1960s, her breakthrough performance was in Black Sunday (1960), where she played the dual role of Asa and Princess Katia Vajda.

Additionally, Steele had supporting parts in Federico Fellini's 8½ (1963), and appeared on television in the 1991 miniseries Dark Shadows. Steele has appeared in several films in the 2010s, including a lead role in The Butterfly Room (2012) and supporting role in Ryan Gosling's Lost River (2014).

Steele was born in Birkenhead, Cheshire, England. She studied art at the Chelsea Art School and in Paris at the Sorbonne.

Steele guest starred on various British television shows including the spy drama, Danger Man (aka Secret Agent) starring Patrick McGoohan. She made her American television debut in 1960 as Dolores in the "Daughter of Illusion" episode of the ABC series, Adventures in Paradise, starring Gardner McKay. In that same year she was replaced by Barbara Eden in the Elvis Presley film Flaming Star after a disagreement with director Don Siegel. In 1961, she appeared as Phyllis in the "Beta Delta Gamma" episode of CBS's Alfred Hitchcock Presents. She also had an important role in Federico Fellini's celebrated 8½ in 1963, and in 1966 appeared in the second-season episode of NBC's I Spy, "Bridge of Spies".

Steele served as associate producer of the 1983 TV miniseries, The Winds of War, and was a producer for its 1988 sequel, War and Remembrance, for which she shared the 1989 Emmy Award for Outstanding Drama/Comedy Special with executive producer Dan Curtis.

Steele was cast as Julia Hoffman in the 1991 remake of the 1960s ABC television series Dark Shadows. In 2010, she was a guest star in the Dark Shadows audio drama, The Night Whispers.

In 2010, actor-writer Mark Gatiss interviewed Steele about her role in Black Sunday for his BBC documentary series A History of Horror. In 2012, Gatiss again interviewed Steele about her role in Shivers for his follow-up documentary, Horror Europa. In 2014, she appeared in Ryan Gosling's directorial debut, the drama-fantasy thriller film Lost River, in which she portrayed the character Belladonna in a supporting role.

Steele was married to American screenwriter James Poe. They were married in 1969 and divorced in 1978.

The contents of this page are sourced from Wikipedia article on 23 Feb 2020. The contents are available under the CC BY-SA 4.0 license.
View Barbara Steele 's image gallery
Image Gallery 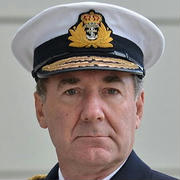 Admiral of the royal navy