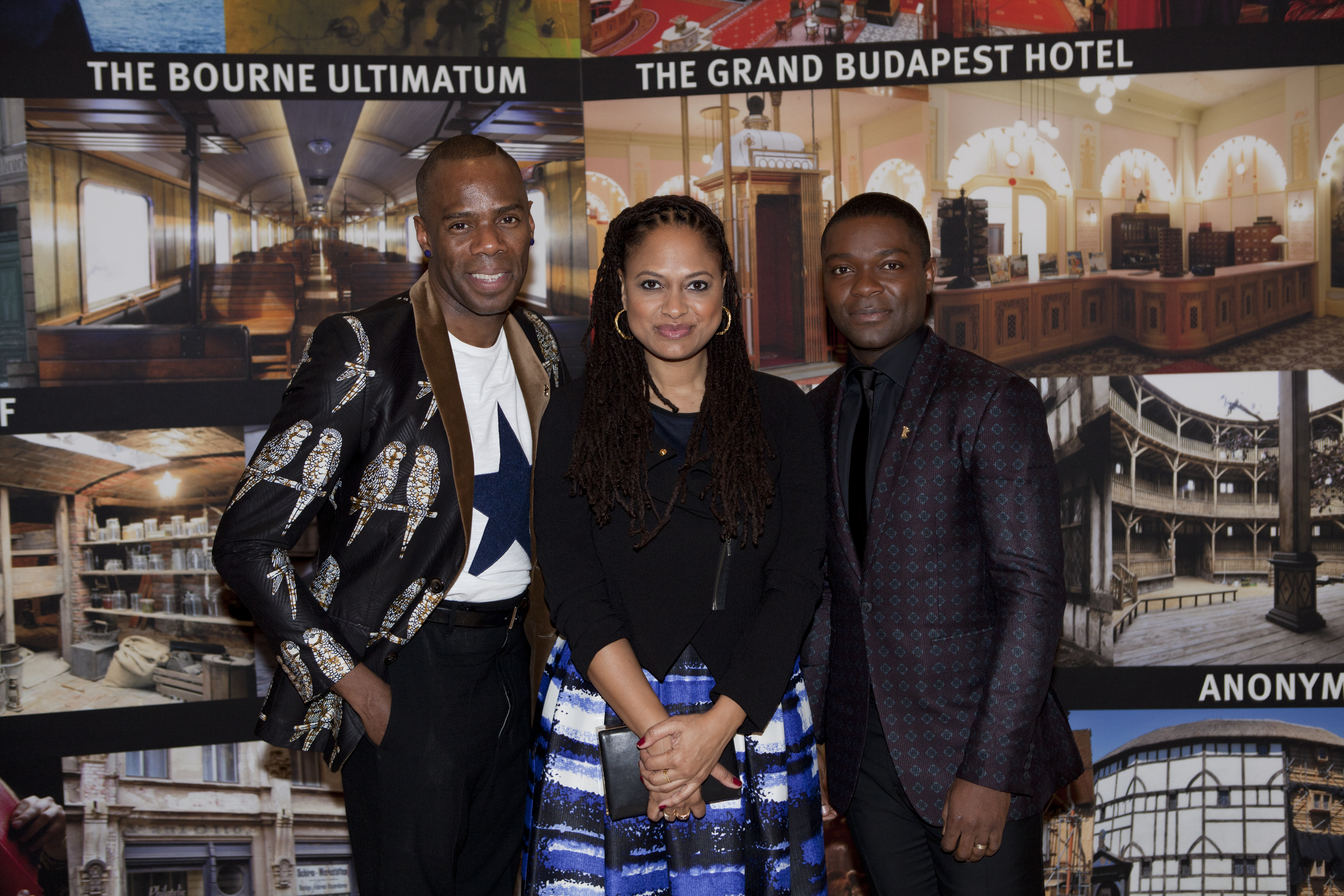 Ava Marie DuVernay (/ˈeɪvə ˌdjuːvərˈneɪ/; born August 24, 1972) is an American director, screenwriter, film marketer, and film distributor. At the 2012 Sundance Film Festival, DuVernay won the Best Director Prize for her second feature film Middle of Nowhere, becoming the first African-American woman to win the award. For her work in Selma (2014), DuVernay was the first black female director to be nominated for a Golden Globe Award. With Selma, she was also the first black female director to have her film nominated for the Academy Award for Best Picture, though she was not nominated for Best Director. In 2017, she was nominated for the Academy Award for Best Documentary Feature for her film 13th (2016).

DuVernay's next film, A Wrinkle in Time, reportedly has a budget exceeding $100 million, making DuVernay the first black woman to direct a live-action film with a budget of that size.

DuVernay was born in Long Beach, California. She grew up in Lynwood, California (near Compton) and graduated in 1990 from Saint Joseph High School in Lakewood. At the University of California, Los Angeles (UCLA), she was a double major in English and African-American studies.

During her summer vacations, she would travel to the childhood home of her father, Murray Maye (which was not far from Selma, Alabama). DuVernay said that these summers influenced the making of Selma, as her father saw the Selma to Montgomery marches as a small child.

Her first interest was in journalism, a choice influenced by an internship with CBS News, where she was assigned to help cover the O.J. Simpson murder trial. She became disillusioned with journalism however, and decided to move into public relations, eventually opening her own public relations firm, The DuVernay Agency.

DuVernay made her feature directorial debut in 2008 with the documentary This Is the Life, a history of LA's Good Life Cafe's arts movement. DuVernay began with documentaries because they can be done on a smaller budget than a feature film, and she could learn the trade while doing so.

In 2011, DuVernay's first narrative feature film, I Will Follow, a drama starring Salli Richardson-Whitfield, was released theatrically. DuVernay's aunt Denise Sexton was the inspiration for the film. The film cost DuVernay $50,000 and was made in 14 days. Roger Ebert called it "one of the best films I've seen about coming to terms with the death of a loved one." I Will Follow was an official selection of AFI Fest, Pan-African Film Festival, Urbanworld and Chicago International Film Festival.

In the summer of 2011, DuVernay began production on her second feature film, Middle of Nowhere. The film was acquired by AFFRM and Participant Media at the 2012 Sundance Film Festival, where it played in U.S. Dramatic Competition and garnered the Best Director Award for DuVernay, the first African-American woman to ever win the prize. DuVernay also won the Independent Spirit John Cassavetes Award for her work on the film.

ESPN commissioned DuVernay to produce and direct Venus Vs., a documentary on Venus Williams' fight for equal prize money for their film series Nine for IX, which aired on July 2, 2013.

In 2015, DuVernay was in consideration to direct and possibly co-write Marvel Studios' Black Panther film. She ultimately decided not to join the project.

DuVernay was commissioned by the Smithsonian National Museum of African American History and Culture to create a film for the museum's opening. August 28: A Day In The Life Of A People tells a story through events that happened on the same date over history, August 28. The 22-minute film includes Lupita Nyong'o, Don Cheadle, Regina King, David Oyelowo, Angela Bassett, Michael Ealy, Gugu Mbatha-Raw, Andre Holland and Glynn Turnman. It focuses on events surrounding the murder of Emmett Till, Dr. Martin Luther King's "I Have A Dream" speech, Hurricane Katrina and the night then-senator Barack Obama accepted the Democratic nomination for president at the 2008 DNC.

Duvernay with David Oyelowo and Colman Domingo in 2015

DuVernay directed Selma, a $20 million budget film produced by Plan B Entertainment, about Martin Luther King, Jr., Lyndon B. Johnson, and the 1965 Selma to Montgomery march. The movie was released on December 25, 2014 to critical acclaim and generally positive reviews.

For the film she did uncredited re-writes of most of the original screenwriter Paul Webb's script with an increased emphasis on King and the people of Selma as central figures. In response to the criticisms of historians and media sources that accused her of irresponsibly rewriting history to portray her own agenda, DuVernay pointed out that the film is "not a documentary. I'm not a historian. I'm a storyteller".

The film was nominated for Best Picture and Best Original Song, but not Best Director, by the Academy Awards. The lack of diversity of the Oscar nominations for 2014 was the subject of much press, especially on Twitter, and the film of the only person of color that was nominated for the 87th Academy Awards, Mexican director Alejandro G. Iñárritu. The award for Best Original Song went to "Glory" from Selma.

DuVernay stated that she had not expected to be nominated so the omission didn't really bother her; rather she was hurt by actor David Oyelowo not being nominated. As to the question of racial diversity of awards, she stated that the obstacles to people of color being represented in the Academy Awards were systemic.

In July 2016 the New York Film Festival made the surprise announcement that 13th, a documentary directed by DuVernay, would open the festival. Until the announcement no mention of the film had been made by either DuVernay or Netflix, the film's distributor. Centered on race in the United States criminal justice system, the film is titled after the Thirteenth Amendment to the United States Constitution, which outlawed slavery (unless as punishment for a crime). DuVernay's documentary opens with the idea that 25 percent of the people in the world who are incarcerated are incarcerated in the U.S. and argues that slavery is being effectively perpetuated in the U.S. through mass incarceration. The film features several prominent activists, politicians, and public figures such as, Angela Davis, Bryan Stevenson, Van Jones, Newt Gingrich, Cory Booker, Henry Louis Gates Jr., and others.

It was released on October 7, 2016 on Netflix.13th has garnered acclaim from film critics and is currently at a 97% rating on Rotten Tomatoes based on 69 reviews, with the critical consensus that states: "13th strikes at the heart of America's tangled racial history, offering observations as incendiary as they are calmly controlled." In 2017, the film was nominated for an Academy Award for Best Documentary Feature at the 89th Oscars, making DuVernay the first black woman to be nominated as a director by the academy in a feature category.

A Wrinkle in Time

In 2010, it was announced that Disney retained film rights to adapt the novel A Wrinkle in Time. Following the success of Tim Burton's Alice in Wonderland, Disney announced the hire of Jeff Stockwell to write the screenplay for Cary Granat and his new Bedrock Studios. Cary Granat had previously worked with Disney on the Chronicles of Narnia and Bridge to Terabithia films. On August 5, 2014, Jennifer Lee was announced as the screenwriter taking over from Stockwell, who wrote the first draft. On February 8, 2016, it was reported that DuVernay was offered to direct the film, and she was confirmed to direct later that same month.

A Wrinkle in Time began filming in November 2016, making DuVernay the first black woman to direct a live-action film with a budget of over $100 million.

DuVernay directed episode 3.08 of Scandal which was called "Vermont is For Lovers, Too".

In 2015, DuVernay executive produced and directed the CBS civil rights crime drama pilot For Justice starring Anika Noni Rose. It was not picked up for distribution.

That same year DuVernay announced she would be creating and executive producing the upcoming drama series, Queen Sugar, alongside Oprah Winfrey. The drama was set to air on Oprah Winfrey Network. In 2016, DuVernay announced that actress Rutina Wesley had been cast in the lead role. The series premiered in 2016 to critical acclaim and positive reviews.

In 2010 DuVernay began AFFRM (the African-American Film Festival Releasing Movement) her own company to distribute films made by or focusing on black people. DuVernay refers to AFFRM as "not so much a business, but a call to action"

Although building strong business foundations for films is a priority, DuVernay stresses that the driving force of the organization is activism.

In 2015 the company rebranded itself under the name ARRAY, promising a new focus on women filmmakers as well.

In 2015, it was announced that DuVernay would be writing, producing, and directing her next project, a fictional account which will focus on the "social and environmental" aspects of Hurricane Katrina while including a love story and a murder mystery. David Oyelowo, from Selma, will be part of the project.

In 2010, DuVernay directed several network music documentaries, including My Mic Sounds Nice for BET Networks and the Essence Music Festival 2010 for TV One.

In 2013, DuVernay partnered with Miu Miu as part of their Women's Tales film series. Her short film The Door starred actress Gabrielle Union and reunited DuVernay with her Middle of Nowhere star Emayatzy Corinealdi. The film was later presented at the 70th Venice International Film Festival.

On March 14, 2015, DuVernay gave a keynote address at the 2015 SXSW Film Festival. In the speech, DuVernay shared that she was the seventh choice of people asked to direct Selma and described her experience at the 2015 Oscars, while being an honor to be able to attend, it was just "a room in L.A."

"Like others African American filmmakers, including pioneers of past generations, DuVernay subscribes to the ethos that art serves a social purpose, debunks demeaning and normative assumptions about black people, and renders black humanity in all manner of genres and complexity." Like many black art movements before her, she continues to advocate for black empowerment and representation in the media.

Two core themes embody her line of work. First, is sustained interrogation that engages with black women’s agency and subjectivity. Second, she refers to family as "site and source of resilience, memory, cultural transmission, generational continuity and dissonance, and as purveyor of all things affirming of black identity".

Some say DuVernay is part of the vanguard of a new generation of African American filmmakers who are gaining new levels of exposure and prominence. This is exemplified in her socially conscious work, but more importantly affirmed by DuVernay’s mission and “call to action“ which constitutes a strategy “to further and foster the black cinematic image in an organized and consistent way, and to not have to defer and ask permission to traffic our films: to be self-determining.”

One step towards this strategy has been her founding of the collective AFFRM.