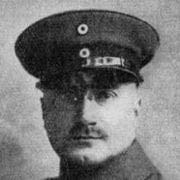 August Stramm (29 July 1874 – 1 September 1915) was a German poet and playwright who is considered one of the first of the expressionists. He also served in the German Army and was killed in action during World War I.

He worked in the German Post Office Ministry as a young man and served his mandatory year of duty in the German Army in 1896–97. After this, he travelled to the United States several times over the next few years before settling in Berlin. In 1912–13, he wrote two plays, Sancta Susanna (which was subsequently used as a libretto for an early opera by Hindemith) and Die Haidebraut, the first of many to appear before the war.

Stramm was also a reservist in the German Army and had achieved the rank of Captain, the highest available to civilians. He was called to active duty when war broke out in August 1914. In January 1915, Stramm was awarded the Iron Cross (Second Class) for his service in France. Later that year, he was sent to the Eastern Front, where he served as Company Leader, later being promoted to Battalion Commander. He was killed in hand-to-hand combat with the Imperial Russian Army in Horodec near Kobryn, in modern Belarus.

He was discovered by the critic, editor, and impresario Herwarth Walden, who went on to publish all of Stramm's poems in his journal Der Sturm (The Storm). A collection of Stramm's poems, titled You, was published whilst Stramm was at the front in 1915 and a second, Dripping Blood, was published after his death in 1919. He became a major influence on the poets of the so-called Sturm-Kreis (Storm Circle) which included Otto Nebel and Franz Richard Behrens.


English translations of poems by Stramm were published by Patrick Bridgwater (August Stramm, 22 Poems, 1969) and Jeremy Adler (Tim Cross, The Lost Voices of World War I, 1988).

The contents of this page are sourced from Wikipedia article on 08 Mar 2020. The contents are available under the CC BY-SA 4.0 license.
View August Stramm 's image gallery
Image Gallery