August Lambert was born on 18 February 1916 in Kleestadt in the Grand Duchy of Hesse. Lambert joined the Luftwaffe in 1937 and as a qualified pilot since 1938 spent the five years as a flight instructor in various training units. In 1943 Oberfeldwebel Lambert joined II./Schlachtgeschwader 1 (II./SG 1). Lambert flew his first combat mission on 23 April 1943 claiming an air victory which was not confirmed. Lambert flew almost 200 ground support missions in which he and the fellow pilots of II./SG 2 accounted for the destruction of hundreds of ground support vehicles and artillery batteries.

II./Schlachtgeschwader 2 was heavily involved in the Crimean campaign during early-mid 1944, and in addition to its usual ground-attack work flew interception sorties, claiming some 247 Soviet aircraft shot down. On 10 April 1944 he claimed 4 victories (1 Yak-9, 1 P-39 Airacobra and 2 Il-2 Sturmoviks), on 17 April 1944 12 victories (including 5 Il-2 Sturmovik) and on 17 May 1944 some 14 Victories. Leutnant Lambert claimed some 70 kills during one three-week period. Lambert received the Knight's Cross of the Iron Cross (Ritterkreuz des Eisernen Kreuzes) on 14 May 1944. By May 1944, the depleted II./SG 2 retired to bases in Romania.

Following the Battle of Sevastopol Lambert was assigned in June 1944 as an instructor but in March 1945 returned to operational assignments as an Oberleutnant with SG 151 and then as Staffelkapitän of 8./SG 77. In April 1945, Lambert was credited with his 100th aerial victory. He was the 101st Luftwaffe pilot to achieve the century mark.

On the morning of 17 April 1945 Leutnant Gerhard Bauer, Oberleutnant August Lambert, and another pilot were taking off from Kamenz for a mission to the front when American P-51Ds of the 55th Fighter Group appeared. Bauer's Fw 190 F-9 "Black 1 +" was quickly shot down north of Kuckau, about eight kilometres east-south-east of Kamenz. August Lambert and another 8./Schlachtgeschwader 77 pilot tried desperately to get away, but could not lose their pursuers. Lambert was shot down and killed in action in his Fw 190 F-8 "Black 9 +" just north of Hoyerswerda, a town some 20 kilometres (12 mi) north-north-east of Kamenz.

Lambert was officially credited with shooting down 116 enemy aircraft, all claimed on the Eastern Front. He also claimed over 100 vehicles destroyed in ground attacks. After his death, Lambert had been nominated for the Oak Leaves to his Knight's Cross, but this request was not approved. 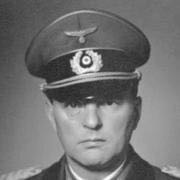