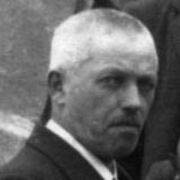 August Högn was born on 2 August 1878, the middle of five children to married bookbinders Andreas and Helene Högn in Deggendorf. Like all children of the later municipality authorities, county commissioners and legislative representatives, Andreas taught August piano. He continued his studies and trained to teach at the prep school in Deggendorf (1891–1894) and at the teaching school in Straubing (1894–1896). As a young teacher he was placed in many locations (Deggendorf, Neukirchen (Niederbayern),Schaufling, Geratskirchen, Zeilarn, Wallersdorf, Eberhardsreuth).

On 20 June 1904 Högn married Emme Gerstl in Wallersdorf. From this marriage came two children (Elfriede, 14 August 1906; August, 17 January 1912). Högn was sent to Ruhmannsfelden, where he remained until his death. In his first years there he made a name for himself as dean of the gymnastics club (21 May 1910 – 27 December 1913), secretary of the Ruhmannsfelden volunteer fire dept. (26 December 1910 – 26 December 1950), and parish clerk for the neighboring Zachenberg (1913–1920). Högn's wife Emma died 26 June 1926. Following this Högn hired his housekeeper Rosa Beischmied, who lived and worked with him until his death.

In the Third Reich Högn was bound to political events as "community section leader," "subgroup leader," and commissioner for "Protector of Common Property". (Volksgut meaning the national cultural treasures that are poetry, stories, music etc..) Högn supposedly maintained good relations with his son-in-law, Karl Schlumprecht, who was the mayor of the city of Bayreuth and a member of the National-Socialist party. One should not underestimate the influence this relationship may have had on his political views during the time of Third Reich.

Högn was suspended in 1945 as a result of the nazification of teaching. He held various positions of headmaster at the school since 1921. After a short teaching stint in 1947 he retired. Högn suffered from a stroke in 1953 and was partially paralyzed. He died on 13 December 1961 in Ruhmannsfelden and was buried on 15 December in Deggendorf.

From 1926-1929 newspaper articles from Högn on local history were published. In his retirement he published three large essays regarding local history, (“History of Ruhmannsfelden” 1949, “History and Chronicles of the Ruhmannsfelden Volunteer Fire Department” 1951, and “Local History of the Zachenberg Community” 1953.)

In 1919 Högn engaged himself as singing and orchestral director of the Ruhmannsfelden gymnastics club. The musical comedy “The Holledauer Fidel” from Erhard Kutschenreuter was performed under his direction, being the largest and most successful offering of the gymnastics club.

From the ages of 20 to 76, Högn was active as singer, organist and choir leader of multiple church choirs in the Passau and Regensburg dioceses. In Ruhmannsfelden he operated most notably for 43 years as organist and in three phases as choir leader (1921–24, 1927–29, and 1940–53). His numerous religious works, including three Mass songs and thirteen Marienlieder predominantly originate from his time as choir director in Ruhmannsfelden. His first composition (Veni creator spiritus B-Dur) originates from 1898, and his final in 1960 (Marienlied Nr.13 Es-Dur). In 1905 his march In Treue fest was published.