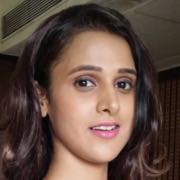 Born and bought up in Delhi. She has done engineering (Electronics and communications) from IGIT, GGSIPU university delhi. Has worked with Punj Lloyd ltd for two years.