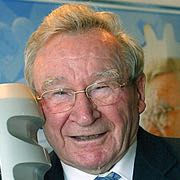 Artur Fischer (31 December 1919 – 27 January 2016) was a German inventor. He is best known for inventing the plastic expanding wall plug.

Born in Tumlingen, Artur Fischer was the son of the village tailor Georg Fischer. His mother Pauline, who ironed collars to make ends meet, recognized her son’s mechanical aptitude and encouraged him at every turn, helping him set up a workbench at home and buying him the German equivalent of an Erector Set.

In the second world war, Fischer survived the Battle of Stalingrad, leaving on the last plane, and later in the war was captured in Italy and sent to a prisoner-of-war camp in England. After returning to his hometown in 1946, he found work as an assistant at an engineering company and began making lighters and loom switches out of military scrap. In 1948, he founded his own company, the Fischer Group.

In 1949, he invented synchronized flash light photography, which was later purchased by the camera company Agfa. Inspired by his inability to photograph his young daughter indoors, his insight was to synchronize an electronic flash with the camera shutter.

His most famous invention is the grey "S Plug" (Split-)Wallplug made from plastic materials (Polyamide) and is available in various shapes and sizes since 1958 (see Wall plug). Fischer held over 1100 patents and overtook Thomas Alva Edison, who held 1093 patents. Fischer also held 5867 trade rights and invented fischertechnik.

Further inventions are (bone-)plugs for fixing bone fractures and one of Fischer’s most recent inventions is a gadget that makes it possible to hold and cut the top off an egg of any size. He got started on the problem when a hotel owner complained to him that his guests, on opening their boiled eggs for breakfast, always made a mess.

The contents of this page are sourced from Wikipedia article on 08 Mar 2020. The contents are available under the CC BY-SA 4.0 license.
View Artur Fischer 's image gallery
Image Gallery