Arsinoe III of Egypt
The basics

Arsinoe III Philopator (Ancient Greek: Ἀρσινόη ἡ Φιλοπάτωρ, which means "Arsinoe the father-loving", 246 or 245 BC – 204 BC) was Queen of Egypt in 220 – 204 BC. She was a daughter of Ptolemy III and Berenice II. She was the first Ptolemaic queen to bear her own brother’s child. Arsinoe and her spouse Ptolemy IV were loved and well respected by the Egyptian public.

Between late October and early November 220 BC she was married to her younger brother, Ptolemy IV. She took active part in the government of the country, at least in the measure that it was tolerated by the all-powerful minister Sosibius.

In 217 BC, she accompanied Ptolemy IV along with 55,000 troops at the Battle of Raphia in Palestine against Antiochus the Great with 68,000 troops. Arsinoe may have commanded a section of the infantry phalanx. Both sides employed cavalry, elephants, and specialized troops such as archers, as well as traditional Macedonian phalanx. When the battle went poorly, she appeared before the troops and exhorted them to fight to defend their families. She also promised two minas of gold to each of them if they won the battle, which they did.

In summer, 204 BC, Ptolemy IV died. His two leading favorites, Agathocles and Sosibius, fearing that Arsinoe would secure the regency, had her murdered in a palace coup before she heard of her husband's death, thereby securing the regency for themselves.

Eratosthenes wrote a manuscript called the Arsinoe, which is lost, the subject being a memoir of the queen. It is quoted by many ancient scholars.

The contents of this page are sourced from Wikipedia article on 07 Mar 2020. The contents are available under the CC BY-SA 4.0 license.
View Arsinoe III of Egypt 's image gallery
Image Gallery 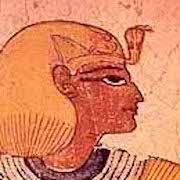 Egyptian pharaoh of the 20th dynasty