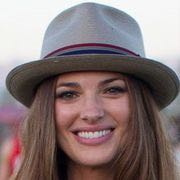 After being discovered by a local photographer in her early teens, Pullman was signed to Ford Models at the age of 17. From there, she went on to work with Next Models in Miami, FL, Fashion in Milan, Italy, and, finally, the illustrious Ford Models in New York City.

She has since modeled for such prestigious fashion houses as Carolina Herrera, Black Label Ralph Lauren, Roots Canada, and Tahari and appeared in publications such as; Maxim, GQ, Self, Fitness, Glamour, and Cosmopolitan, making the front cover of Newsweek.

Finding her stride in the bridal market, Aria has graced no less than five covers of Brides Magazine, as well as the covers of Modern Bride, Riviere, Bridal Guide, and Wedding Style.

After making the migration West to Los Angeles Pullman continued her studies through Anthony Meindl's Actor Workshop, Upright Citizens Brigade, and private coaching. She then began her career in commercial and theatrical acting.

Pullman has since gone on to appear in television shows such as Lucifer, Rescue Me, Once Upon A Time, Life, Jane The Virgin, Revenge, CSI: Miami, All My Children and Girl Meets World plus appearances in films Jersey Boys, One Last Thing, The Hoax and HellRide.

In her early 20s Pullman went on to pursue her musical dreams in New York City. After auditioning with East Village band, Apocalypstik, she earnt her performing chops on the stages of The Limelight, CBGB, Arlene’s Grocery, Bowery Electric, and Don Hills.

In 2005 Apocalypstik released their album, Back on the Sauce (2005), and were featured on the collaborative albums New York City Rock and Roll, Skateboard Punk Hits, and Tribute to Rancid.

During this time Pullman had the chance opportunity to work with many prominent figures in the business, such as Joan Jett, Kenny Laguna (BlackHeart Records), and Kara DioGuardi (American Idol).

Following her move to Los Angeles, Pullman continued to work on her solo music, self-releasing her EP, In Light Of (2009), as well as contributions to the soundtracks of See No Evil, Gone In 30 Seconds: The Lee White Story, Chasing Eagle Rock, Mindless, and The Girl.

In 2012 Aria launched Dream-Pop duo “Some Go Haunting” with multi-instrumentalist Jason Rivera. Aria and Jason bonded through their love of independent free-spirited rock and roll. They released their debut self-titled EP in 2011, followed by singles House Of Arcadia, Stay With Me, and Me & You, the latter winning "BeIn Sports" "beIn The Beat" Competition in 2014. The prize was a live recording session of the single at Hit Factory Criteria Studio, Miami, which was broadcast during the El Clasico 2014 soccer match (Real Madrid vs. FC Barcelona).