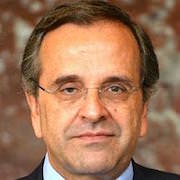 Antonis Samaras (Greek: Αντώνης Σαμαράς, [anˈdonis samaˈɾas]; born 23 May 1951) is a Greek politician who served as Prime Minister of Greece from 2012 to 2015. A member of the New Democracy party, he was its president from 2009 until 2015. Samaras started his national political career as Minister of Finance in 1989; he served as Minister of Foreign Affairs from 1989 to 1992 (with a brief interruption in 1990) and Minister of Culture and Sports in 2009.

Samaras was previously best known for a 1993 controversy in which he effectively caused the New Democracy government, of which he was a member, to fall from power. In spite of this, he rejoined the party in 2004 and was elected to its leadership in a closely fought intra-party election in late 2009. He was the seventh party leader since it was founded in 1974.

Born in Athens, Samaras is the son of Doctor Konstantinos Samaras (a Professor of Cardiology) and Lena (née Zannas, a maternal granddaughter of author Penelope Delta). His brother, Alexander, is an architect. His paternal uncle, George Samaras, was a long-standing Member of Parliament for Messinia in the 1950s and 1960s.

Samaras grew up among the Athens well-connected families, playing tennis. At the age of 17, he won the Greek Teen Tennis Championship. He attended school in the Athens College (founded by his maternal great-grandfather, Stefanos Delta and Emmanouil Benakis, Delta's father-in-law) and graduated from Amherst College in 1974 with a degree in economics, and then from Harvard University in 1976 with an MBA.

Samaras and former Prime Minister George Papandreou were dormitory roommates during their student years at Amherst College, but became bitter political rivals. He is married and has a daughter and a son.

Samaras has been elected as a Member of Parliament, initially for Messinia, from 1977 onward. In 1989 he became Minister of Finance, later advancing to become the Minister of Foreign Affairs in the New Democracy government of Prime Minister Konstantinos Mitsotakis (1990–1993), from which post he caused the Macedonia naming dispute to ignite. In a meeting of the Greek political leaders under the President of the Republic on the naming dispute on 13 April 1992, Samaras presented his own conditions for the solution of the crisis. These were rejected by both the President of the Republic, Konstantinos Karamanlis as well as the Prime Minister, Konstantinos Mitsotakis. Samaras was subsequently removed from Minister of Foreign Affairs.

After being removed from his post, Samaras founded his own party, Political Spring (Greek: Πολιτική Άνοιξη, romanised as Politiki Anoixi), located politically to the right of New Democracy. The defection of one Member of Parliament from New Democracy to Samaras' party caused the government's fall from power in 1993.

Return to the New Democracy

In the 2007 general election he was elected to the Hellenic Parliament for Messinia and consequently resigned from the European Parliament. He was succeeded by Margaritis Schinas. In January 2009 he was appointed Minister of Culture following a government reshuffle. In this capacity he inaugurated the new Acropolis Museum in July 2009. He was reelected in Messenia in 2009.

After New Democracy resoundingly lost the 2009 legislative election, Kostas Karamanlis resigned as head of the party, prompting a leadership race, and Samaras ran for the post. Early polls showed he was running neck and neck with the perceived initial favorite Dora Bakoyanni, the former Foreign Minister and former Athens mayor. Shortly thereafter, another leadership candidate, former Minister Dimitris Avramopoulos announced he was resigning his candidacy and would support Samaras instead. In a break with previous practice, an extraordinary party congress resolved that the new leader would be elected by party members in a countrywide ballot. Samaras' candidacy soared in opinion polls and finished the race as a favorite.

In the early morning hours of 30 November 2009, Samaras was elected the new President of New Democracy. Following early results showing Samaras in a comfortable lead, Bakoyanni, his main rival, conceded defeat and called Samaras to congratulate him. He accepted his election with a speech at the party headquarters, and pledged to carry out a broad ideological and organizational reform, aspiring to regain majority status. He was later instrumental in the expulsion of Bakoyanni (2010) for defying the party line and voting for an austerity measure required for European Union-International Monetary Fund backed lending.

Prime Minister George Papandreou announced his government's plans on 31 October to hold a referendum on the acceptance of the terms of a Eurozone bailout deal. The referendum was to be held in December 2011 or January 2012. Following vehement opposition from both within and outside the country, Papandreou however scrapped the plan a few days later on 3 November.

On 5 November, his government only narrowly won a confidence vote in the Greek Parliament and Samaras called for immediate elections. The next day Papandreou met with opposition leaders trying to reach an agreement on the formation of an interim national unity government. However, Samaras only gave in, after Papandreou agreed to step aside, allowing the EU bailout to proceed and paving the way for elections on 19 February 2012.

After several days of intense negotiations, the two major parties along with the Popular Orthodox Rally agreed to form a grand coalition headed by former Vice President of the European Central Bank Lucas Papademos. On 10 November, George Papandreou formally resigned as Prime Minister of Greece. The new coalition cabinet and Prime Minister Lucas Papademos were formally sworn in on 11 November 2011.

Following the May 2012 general election in which the New Democracy party became the largest party in the Hellenic Parliament, Samaras was asked by Greek President Karolos Papoulias to try to form a government. However, after a day of negotiations with the other parties, Samaras officially announced he was giving up the mandate to form a government. The task passed to Alexis Tsipras, Leader of Syriza, the second largest party, who was also unable to form a government. After the Panhellenic Socialist Movement (PASOK) also failed to negotiate a successful agreement to form a government, emergency talks with the President of Greece ended with a new election being called while the outgoing Chairman of the Council of State Panagiotis Pikrammenos was appointed as Prime Minister of Greece in a caretaker government composed of independent technocrats.

Voters once again took to the polls in the widely watched June 2012 election. The New Democracy party came out on top in a stronger position with 129 seats, compared to 108 in the May election. On 20 June 2012, Samaras successfully formed a coalition with the PASOK (now led by former Finance Minister Evangelos Venizelos) and the Democratic Left (DIMAR). The new government had a majority of 28 (which was later reduced to 18), with Syriza, the Independent Greeks (ANEL), Golden Dawn (XA) and the Communist Party (KKE) comprising the opposition. The PASOK and DIMAR chose to take a limited role in Samaras's Cabinet, being represented by party officials and independent technocrats instead of MPs.

The Democratic Left left the coalition on 21 June 2013 in protest at the closure of the nation's public broadcaster Hellenic Broadcasting Corporation (ERT), leaving Samaras with a slim majority of 153 ND and PASOK MPs combined. The two remaining parties proceeded to negotiate a cabinet reshuffle that resulted in a significantly expanded role for PASOK in the new coalition government. A further reshuffle followed the 2014 European Parliament election.

Samaras implemented a series of reforms and austerity measures with the aim of reducing government budget deficits and making the Greek economy competitive. In 2013 he passed reform bills approving the layoff of 15,000 public employees, among them high school teachers, school guards and municipal policemen. At the same time, he cut value-added tax (VAT) in restaurants to 13 percent from 23 percent. He also passed a bill instituting the Single Property Tax and the auction of houses. The Minister of Administrative Reform and e-Governance Kyriakos Mitsotakis implemented an evaluation process on the public sector to locate surplus staff members.

Greece achieved a primary government budget surplus in 2013. In April 2014, Greece returned to the global bond market as it successfully sold €3 billion worth of five-year government bonds at a yield of 4.95%. Greece's credit rating was upgraded by Fitch from B− to B. Greece returned to growth after six years of economic decline in the second quarter of 2014, and was the eurozone's fastest-growing economy in the third quarter. Tourism also grew. It is estimated that throughout 2013 Greece welcomed over 17.93 million tourists, an increase of 10% compared to 2012. More than 22 million tourists visited Greece in 2014. On healthcare, Minister for Health Adonis Georgiadis gave complete free pharmaceutical coverage to more than 2.000.000 uninsured citizens, with the cost being set at 340 million euros.

On 9 December 2014, Samaras announced the candidacy of New Democracy politician Stavros Dimas for the position of President of Greece. Dimas failed to secure the required majority of MPs of the Hellenic Parliament in the first three rounds of voting. According to the provisions of the Constitution of Greece, snap elections were held on 25 January 2015, which were won by Syriza. Tsipras succeeded Samaras, who resigned as Leader of New Democracy on 5 July 2015, following the overwhelming victory of the "No" vote in the bailout referendum, naming Vangelis Meimarakis as transitional leader. Samaras had been backing a "Yes" vote, together with his party, before the referendum.

The contents of this page are sourced from Wikipedia article on 08 Mar 2020. The contents are available under the CC BY-SA 4.0 license.
View Antonis Samaras 's image gallery
Image Gallery 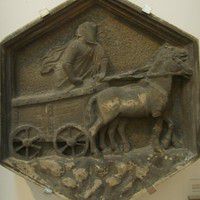 Son of the Greek Primeminister 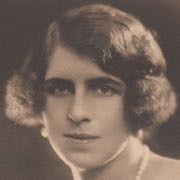 Helen of Greece and Denmark

Queen Mother of Romania, Righteous Among the Nations