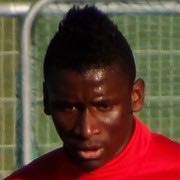 Antonio Rüdiger ([anˈto:nio ˈʁy:diˌgɐ]; born 3 March 1993) is a German professional footballer who plays as a centre back for Premier League club Chelsea and the Germany national team.

He began his career at VfB Stuttgart, representing their reserves in 3. Liga and the first team in the Bundesliga. In 2015 he joined Roma, initially on loan and a year later for a €9 million fee. He was signed by Chelsea in 2017 for an estimated £27 million.

Rüdiger made his international debut for Germany in March 2014. He was forced to miss UEFA Euro 2016 due to an injury suffered earlier in the season but he was part of the squad that won the 2017 FIFA Confederations Cup. He kept his spot in the squad for the 2018 World Cup.

On 23 July 2011, Rüdiger made his debut for VfB Stuttgart II in the 3. Liga against Arminia Bielefeld.

On 29 January 2012, Rüdiger made his Bundesliga debut for VfB Stuttgart's first team in a home professional match against Borussia Mönchengladbach, he was replaced by Raphael Holzhauser in the 79th minute of a 3–0 defeat.

On 19 April 2013, Rüdiger extended his contract with VfB Stuttgart until June 2017. On 4 May he received a red card in the 74th minute of a 2–0 home defeat against Greuther Fürth. On 1 June, Rüdiger played in the final of the DFB Pokal in a match lost 3–2 against Bayer Munich. He finished his second season in the first team with 24 appearances, plus 4 appearances and 2 goals in the reserve team.

On 19 August 2015, Serie A side Roma signed Rüdiger on loan from VfB Stuttgart for €4 million. The clubs agreed on an optional €9 million transfer fee at the end of the one-year contract.

On 12 September, he made his debut in a 2–0 away win over Frosinone. On 9 January 2016 he scored his first goal for Roma in the 4th minute of a 1–1 home draw against Milan. He finished his season-long loan to Roma with 37 appearances and 2 goals. On 30 May, Roma officially signed Rüdiger from for €9 million + €0.5m bonuses on a four-year contract.

On 23 February 2017, as a substitute replacing Kostas Manolas in the 46th minute of a 1–0 home defeat against Villareal in the round of 32 of the UEFA Europa League, he was sent off with a double yellow card in the 81st minute. On 30 April he was sent off with a red card in the 93rd minute in Derby della Capitale against Lazio in a 3–1 home defeat. Rüdiger finished his second season at Roma with 35 appearances and 4 assists.

On 9 July 2017, Rüdiger joined Chelsea from Roma for a reported initial fee of £29 million on a five-year deal. He was given the number 2 shirt.

He made his debut on 6 August as a substitute replacing Marcos Alonso in the 79th minute in a 4–1 loss on penalties to Arsenal in the 2017 FA Community Shield. He made his Premier League debut six days later in a 3–2 defeat against Burnley at Stamford Bridge. He scored his first goal for Chelsea in the round of 16 of the EFL Cup in a 2–1 win over Everton, and his first league goal was the only one of a home win over Swansea City on 29 November 2017.

On 20 October 2018, Rüdiger scored his first goal of the season, opening the scoring in a 2–2 home draw against Manchester United.

On 22 December 2019, Rüdiger made a complaint about racist abuse directed against him during the away match against Tottenham Hotspur, which received wide media coverage. It prompted a call for government action on racism in football. However, no evidence of racist abuse against Rüdiger was found after a police investigation.

On his 100th club appearance, he scored Chelsea’s two goals, both headers assisted by Mason Mount in a 2–2 draw against Leicester City at the King Power Stadium on 1 February.

Rüdiger was eligible to play for Germany and Sierra Leone, his mother's homeland and was a member of the several German national youth football teams up to the Germany U21 team.

He made his debut for the German national senior team on 13 May 2014 in a 0–0 draw against Poland. Although he was initially included in his nation's 23-man squad for UEFA Euro 2016, Rüdiger was later ruled out of the tournament due to injury, after tearing the anterior cruciate ligament in his right knee during a training session on 7 June.

Rüdiger was part of the German national squad which won the 2017 FIFA Confederations Cup in Russia. He played four matches in the tournament, including the 1–0 win over Chile in the final. On 8 October 2017, he headed his first international goal in a 5–1 home win over Azerbaijan in World Cup qualifying.

Rüdiger was included in Germany's final 23-man squad for the 2018 FIFA World Cup on 4 June 2018. On 24 June, he picked up for the second group stage match against Sweden as first choice centre-back Mats Hummels suffered an injury, the game ended 2–1 win for Germany. Four days later, he did not play the last group stage match and his side were knocked out by South Korea after a 2–0 defeat.

Normally a centre-back, Rüdiger is a defender, who is also capable of playing as a full-back on either flank. In 2015, ESPN described him as a "...tall, quick and athletic defender who is ... comfortable with the ball at his feet", also touting him as an "interesting prospect" who "...has all the necessary physical attributes to become a top-level centre-back." His Chelsea profile also describes him as a "tough tackler".

Rüdiger's father, Matthias Rüdiger, is German, while his mother Lily is originally from Sierra Leone. He is the half-brother of Sahr Senesie.

In October 2018 he stated that authorities needed to do more to deal with racism in the sport.