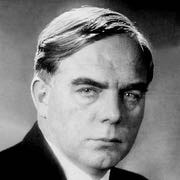 Anton Flettner (November 1, 1885 – December 29, 1961) was a German aviation engineer and inventor. Born in Eddersheim (today a district of Hattersheim am Main), Flettner made important contributions to airplane, helicopter, vessel, and automobile designs.

Anton Flettner attended the Fulda State Teachers College in Fulda, Germany. He was the village teacher in Pfaffenwiesbach from 1906-1909. Flettner subsequently taught high school mathematics and physics in Frankurt, where he developed ideas that would assist Germany in World War I.

Flettner revolutionized the art of harnessing the wind, used essentially in an unaltered form for thousands of years—the canvas sail—by a modern machine—the Flettner Rotor ship—that could permit ocean liners to reduce their crews by two-thirds and save 90 percent in fuel.

From 1914-1918 Anton Flettner worked at the German Ministry for War in the development of remote controls for air, water, and land vehicles. While employed under the aegis of Graf Zeppelin, Flettner also developed pilotless aircraft projects.

At the age of 29, Flettner presented his first invention, a steerable torpedo, to the Kriegsmarine (German Imperial Navy) of World War I. This, and his next invention, a remote-controlled combat car, which was presented to the Heer (German Army), were rejected because they were not considered to be technically feasible. However, Flettner's efforts culminated in the prototype Siemens Schuckert Werke 1000 kg wire guided air to surface missile of 1918.

During World War I, Flettner developed the servo tab / anti-servo tab. The servo tab evolved into the "trim tab" which is still in use on all airplanes and many large vessels. Trim tabs are extremely useful in moving large rudders on vessels with vastly reduced power.

Following World War I, Flettner was named Managing Director of the Institute for Aero and Hydro Dynamics in Amsterdam. He held that post until 1931. In the 1920s, Flettner also invented the famous Flettner rotary ventilator, which was widely used on buses, vans, boats, railroad cars, campervans, and trucks to assist cooling without the use of energy. Modern derivatives of his ventilator are still manufactured in Britain by Flettner Ventilator Limited.

With assistance from Albert Betz (German physicist), Jakob Ackeret (Swiss aeronautical engineer), Ludwig Prandtl (German engineer), and Albert Einstein (German theoretical physicist), Anton Flettner constructed an experimental rotor vessel (Buckau later renamed the Baden-Baden) in October 1924 at the Friedrich Krupp Germaniawerft. The Buckau was a schooner refitted with two rotating 50-foot cylinders and was the first vessel built with a propulsion system based on the Magnus effect. Flettner came upon the idea while at the beach with his wife. Flettner used sand, flowing over his rotating hand, to describe the Magnus effect and realized its potential for sail propulsion. The Baden-Baden crossed the Atlantic in 1926. It could outsail normal schooners under moderate to heavy winds, but it was destroyed by a storm in 1931. A commercial ship, the Barbara Rotor ship, was also built and sailed to the United States.

In 1926, Anton Flettner shifted his focus to aviation in founding his own company, the Anton Flettner Aircraft Corporation in Berlin, aiming at the application of the Flettner-rotor as a wing replacement on large wind turbines. In 1935, Flettner built a German night reconnaissance and anti-submarine autogyro called the Fl 184. Flettner followed this accomplishment by building the Flettner Fl 185 in 1936, an experimental German gyrodyne, which could fly as both a helicopter and as a gyroplane.

In 1938 Flettner, together with Kurt Hohenemser, built the Flettner Fl 265. The Flettner Fl 265 addressed the problem of torque compensation as the first helicopter with counter-rotating rotors (Flettner double rotor).

Flettner's helicopter inventions were financed from wealth acquired from his ventilator business, a company that was enhanced by the skill of his wife, Lydia Freudenberg Flettner. Anton Flettner built his helicopters for the German military, primarily for navy spotter use. Although his wife was Jewish, he held a personal relationship with the head of gestapo, Heinrich Himmler. Himmler had Flettner's wife and family escorted safely to Sweden for the duration of the war. Anton Flettner's partner and confidant was Dr. Kurt Hohenemser, a brilliant and thorough engineer who developed the details necessary for the success of Flettner's helicopters. Dr. Hohenemser's father was also Jewish, yet both remained unharmed during their tenure together throughout the war as they worked to develop the helicopter for military use.

While the final product, the Flettner Fl 282 Kolibri ("Hummingbird"), could be factory-assembled, Flettner and Hohenemser insisted that they were the only ones who were capable of assembling the complex intermeshing rotor gearbox assembly. Plans for mass production of 1,000 Flettner Fl 282 helicopters by BMW were disrupted when allied forces bombed the designated factory.

At least two other Flettner helicopters were under development when World War II ended. They were the Flettner Fl 285, another reconnaissance helicopter with a two-hour flight limit and capacity to carry two small bombs, and the Flettner Fl 339, a large transport helicopter project designed for approximately 20 passengers. Upon the war's conclusion, Anton Flettner was held in the "Dustbin" interrogation camp at Kransberg Castle. After 1945, Flettner, along with many other aviation pioneers, was brought to the United States as part of Operation Paperclip. Flettner and his partner, Dr. Kurt Hohenemser, were among the first German emigrants into the United States after World War II.

Flettner's company in the U.S. was not commercially successful, but his work was shared with the US Army Air Forces. Throughout his 14 years in the United States, Flettner was active in carrying out research projects for the US Army, US Air Force, and the US Navy.

Flettner became the chief designer of Kaman Aircraft and many of the Flettner design concepts are found in Kaman helicopters of later years.

Today the Flettner rotor is in operation as a supplemental propulsion system for transport and research vessels. There are two ships utilizing the concept of the Flettner rotor in a modified form, the turbosail Acyone developed by Jacques-Yves Cousteau in 1985 and the E-Ship 1, a cargo ship that made its first voyage in 2010. Albert Einstein praised the Flettner Rotor ship as having great practical importance.

Anton Flettner died at age 76 in New York City on December 29, 1961. Among his many distinctions, Anton Flettner was an honorary member of the American Helicopter Society and the Convertible Aircraft Pioneers. Flettner's birthplace home and tomb are national historic protected monuments in Germany.

The contents of this page are sourced from Wikipedia article on 08 Mar 2020. The contents are available under the CC BY-SA 4.0 license.
View Anton Flettner 's image gallery
Image Gallery