Anton Vladimirovich Antonov-Ovseyenko (Russian: Анто́н Влади́мирович Анто́нов-Овсе́енко) (23 February 1920, Moscow, RSFSR – 9 July 2013, Moscow, Russia) was a Russian historian and writer.
Born on 23 February 1920, he was the son of a Bolshevik military leader Vladimir Antonov-Ovseyenko. In 1935, he joined the historical faculty of the Moscow State Pedagogical Institute. In 1938, he was expelled from Komsomol and the institute wherein, however, he was reinstated in the same year.
He was arrested in 1940 and spent 13 years in labor camps.
Antonov-Ovseyenko is best known for his biography of Lavrentiy Beria and he also wrote several books.
Antonov-Ovseyenko operated a state museum on the Gulag, for which the Moscow administration provided a building in August 2001.
When he died in 2013, he was still working two full days a week to continue documenting what he called "the evils of the Soviet era" and to help with plans for a new, larger space. 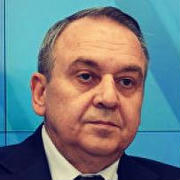