Ante Tomić (born April 22, 1970) is a Croatian writer and journalist.
A native of the village Glavina Donja near Imotski, Tomić graduated with a joint honours degree in philosophy and sociology from the University of Zadar. He began to write as a reporter for the local daily newspaper Slobodna Dalmacija, showing in his articles great literary talent that would manifest itself in his 2000 debut novel Što je muškarac bez brkova. Three years later he wrote the novel entitled Ništa nas ne smije iznenaditi which described the life of recruits in the Yugoslav People's Army. Both novels were adapted for the screen. Tomić co-authored the script for the 1999 film Posljednja volja, as well as that of the 2002 mini-series Novo doba.
Ante Tomić now writes for the newspaper Jutarnji list and in 2004 he travelled across the US to provide his newspaper's coverage of the presidential campaign by talking to the American electorate on the street. As of 2009, he has his own column Vlaška posla in Slobodna Dalmacija. 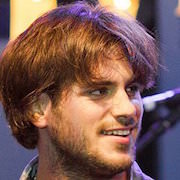