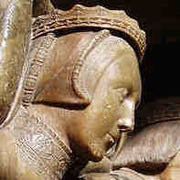 Anne Hastings, Countess of Shrewsbury (c. 1471–1520) was an English noblewoman who served as a lady-in-waiting to Queen consort Catherine of Aragon, the first wife of King Henry VIII of England. Anne was the first wife of George Talbot, 4th Earl of Shrewsbury, by whom she had 11 children. Her uterine half-sister was Cecily Bonville, Baroness Harington and Bonville, the wealthiest heiress in late 15th-century England.

Anne was also the Baroness Furnivall, as her husband held the title of 9th Baron Furnivall.

Anne was born in about 1471, the youngest child of William Hastings, 1st Baron Hastings, and Katherine Neville, sister of Richard Neville, 16th Earl of Warwick. Anne had four brothers, Sir Edward Hastings, 2nd Baron Hastings, Sir William, Sir Richard, and George, and a sister, Elizabeth. She had an older half-sister Cecily Bonville from her mother's first marriage to William Bonville, 6th Baron Harington who was executed by the command of Queen Margaret of Anjou after the Battle of Wakefield where he fought on the side of the Yorkists. Cecily was the wealthiest heiress in England as well as the suo jure Baroness Harington and Bonville.

Anne grew up during the period in English history when the dynastic civil wars fought between the Houses of York and Lancaster, known as the Wars of the Roses, broke out at intervals and resulted in the deaths of many combatants and supporters from both sides.

Anne's father was a staunch Yorkist, and a close friend and Lord Chamberlain of King Edward IV. After the latter's death in April 1483, Hastings was persuaded by his mistress Jane Shore to enter into a conspiracy against the late king's youngest brother, Richard, Duke of Gloucester, who had been made Lord Protector of the realm. Upon discovery of Hastings treachery, Gloucester gave the order for his execution, which was carried out at the Tower of London on 13 June 1483. Anne's father was not attainted, however, and her mother, Katherine was placed under Gloucester's protection following his ascension as King Richard III of England, which secured her privileges and rights.

At the time of her father's execution, Anne was already married to Hastings' teenaged ward. Her mother, by royal permission, took over as legal guardian of Anne's husband until he came of age.

Sometime before 27 June 1481, at the age of about 10, Anne married her father's 13-year-old ward, George Talbot, 4th Earl of Shrewsbury, 9th Baron Furnivall. George was her second cousin. She was his first wife, and upon their marriage she was styled as Countess of Shrewsbury and Baroness Furnivall.

Together George and Anne had 11 children:

At the royal court

Early in the reign of King Henry VIII of England, Anne came to court where she served as a lady-in-waiting to Queen consort Catherine of Aragon. It is not known how long she served in this capacity.

George Talbot, Earl of Shrewsbury had a chapel added to the church in 1520 to serve as a family chapel; and after his own death, a monument was built in Shrewsbury Chapel where his effigy can be seen flanked by those of Anne and his second wife, Elizabeth.

The contents of this page are sourced from Wikipedia article on 09 Mar 2020. The contents are available under the CC BY-SA 4.0 license.
View Anne Hastings, Countess of Shrewsbury 's image gallery
Image Gallery