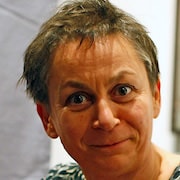 Anne Teresa Enright FRSL (born 11 October 1962) is an Irish writer. She has published half a dozen novels, many short stories and a non-fiction work called Making Babies: Stumbling into Motherhood, about the birth of her two children. Her writing explores themes such as family, love, identity and motherhood. She is married to Martin Murphy, who is an arts adviser with the Arts Council of Ireland. They have two children together, a son and daughter.

Enright won the 2007 Booker Prize for her novel The Gathering.

Anne Enright was born in Dublin, Ireland, and was educated at St Louis High School, Rathmines. She won an international scholarship to Lester B. Pearson United World College of the Pacific in Victoria, British Columbia, where she studied for an International Baccalaureate for two years. She then completed a BA in English and Philosophy at Trinity College Dublin. She began writing in earnest when she was given an electric typewriter for her 21st birthday. She won a Chevening Scholarship to the University of East Anglia's Creative Writing Course, where she studied under Angela Carter and Malcolm Bradbury and completed an M.A.

Enright was a television producer and director for RTÉ in Dublin for six years and produced the RTÉ programme Nighthawks for four years. She then worked in children's programming for two years and wrote on weekends. She began writing full-time in 1993. Her full-time career as a writer came about when she left television due to a breakdown, later remarking: "I recommend it [...] having a breakdown early. If your life just falls apart early on, you can put it together again. It's the people who are always on the brink of crisis who don't hit bottom who are in trouble."

Enright lived in Bray, County Wicklow, until 2014. She is married to Martin Murphy, who was director of the Pavilion Theatre in Dún Laoghaire and now works as an adviser to the Arts Council of Ireland. They have two children, a son and daughter.

Critics often suggested Enright derived her early writing from that of Brian O'Nolan. 1991 brought the publication of The Portable Virgin, a collection of her short stories. Angela Carter (who, as Enright's former creative writing teacher, knew her well) called it "elegant, scrupulously poised, always intelligent and, not least, original."

Enright's first novel was published in 1995. Titled The Wig My Father Wore, the book explores themes such as love, motherhood and the Catholic Church. The narrator of the novel is Grace, who lives in Dublin and works for a tacky game show. Her father wears a wig that cannot be spoken of in front of him. An angel called Stephen who committed suicide in 1934 and has come back to earth to guide lost souls moves into Grace's home and she falls in love with him.

In 2000 Enright's second novel, What Are You Like?, was published. About twin girls called Marie and Maria who are separated at birth and raised apart from each other in Dublin and London, it looks at tensions and ironies between family members. It was shortlisted in the novel category of the Whitbread Awards.

Enright's third novel, The Pleasure of Eliza Lynch, published in 2002, is a fictionalised account of the life of Eliza Lynch, an Irish woman who was the consort of Paraguayan president Francisco Solano López and became Paraguay's most powerful woman in the 19th century.

Enright's 2004 book Making Babies: Stumbling into Motherhood is a collection of candid and humorous essays about childbirth and motherhood.

Her fourth novel, The Gathering, won the Booker Prize in 2007.

Her characters have often been set at Belvedere Hotel.

Her writing has appeared in several magazines and newspapers including The Dublin Review, The Irish Times, The New Yorker (since 2000), The Guardian, Granta, The Paris Review and the London Review of Books. The 4 October 2007 issue of the London Review of Books published her notorious essay "Disliking the McCanns" about Kate and Gerry McCann, the British parents of three-year-old Madeleine McCann, who disappeared in suspicious circumstances while on holiday in Portugal in May 2007.

She was once a regular contributor to BBC Radio 4, and has also reviewed for RTÉ.

In 2011, the Irish Academic Press published a collection of essays about her writing, edited by Claire Bracken and Susan Cahill. Her work is discussed and illustrated in the video "Reading Ireland."

Taoiseach Enda Kenny appointed Enright as the inaugural Laureate of Irish Fiction. During her time as Laureate for Irish Fiction, Enright promoted people's engagement with Irish literature through public lectures and creative writing classes. She later took up teaching at UCD's School of English, beginning in the 2018–19 academic year.

The contents of this page are sourced from Wikipedia article on 09 Mar 2020. The contents are available under the CC BY-SA 4.0 license.
View Anne Enright 's image gallery
Image Gallery