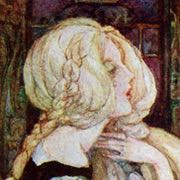 Anne Anderson (1874—26 May 1952) was a prolific Scottish illustrator, primarily known for her art nouveau children's book illustrations, although she also painted, etched and designed greeting cards. Her style of painting was influenced by her contemporaries, Charles Robinson, and Jessie Marion King, and was similar to that of her husband, Alan Wright (1864-1959).

Born in Scotland in 1874 to James and Grace Anderson, Annie "Anne" Anderson and her siblings—four brothers and one sister, Grace—spent their childhood in Argentina. On reaching adulthood, Annie and Grace returned to England to find work. By 1910, Annie could afford to buy a cottage in Berkshire.

She married the artist Alan Wright in June 1912 at Burghfield Common Parish Church in Berkshire, and they lived in the cottage she had purchased two years earlier. Though they collaborated on many projects, Anne was considered the driving force. Her husband had had a successful career as an illustrator until working on a book for the vilified homosexual Baron Corvo in 1898. That book caused a scandal that ruined Wright's reputation. After that his opportunity to work was curtailed, but he continued to contribute to his wife's illustrations.

Book illustrations and other work

Her book illustrations began appearing at the end of the Edwardian era. Her illustrations may be found in children's books and annuals such as Blackie's and Cassell's, on Royal Doulton China, and were frequently used on postcards.

While some sources list Anderson's death in 1930, other sources say she died in 1936, and still others indicate she was still alive after World War II.

There is, however, an entry on 29 May 1952 in the Berkshire Burial Index for a married artist named Annie Wright, aged 76, who had resided in Burghfield Common. Given that there is an entry in the same Burial Index on 17 July 1959 for a widower named Alan Wright, aged 94, who also had resided in Burghfield Common, it lends more credence to her death taking place on 26 May 1952.

The contents of this page are sourced from Wikipedia article on 08 Mar 2020. The contents are available under the CC BY-SA 4.0 license.
View Anne Anderson 's image gallery
Image Gallery