Andrey (Andrei) Ivanovich Yeryomenko (or Yeremenko, Eremenko; Russian: Андре́й Ива́нович Ерёменко; Ukrainian: Андрій Іванович Єрьоменко; October 14 [O.S. October 2] 1892 – November 19, 1970) was a Ukrainian-Soviet general during World War II and, subsequently, a Marshal of the Soviet Union. During the war, Yeryomenko commanded the Southeastern Front (later renamed the Stalingrad Front) during the Battle of Stalingrad in summer 1942 and planned the successful defense of the city. He later commanded the armies responsible for the liberation of Western Hungary and Czechslovakia in 1945.

Born in Markivka in Kharkov Governorate (today in Ukraine) to a peasant family of Ukrainian (or Russian) ethnicity, Yeryomenko was drafted into the Imperial Army in 1913, serving on the Southwest and Romanian Fronts during World War I. He joined the Red Army in 1918, where he served in the legendary Budyonny Cavalry (First Cavalry Army). He attended the Leningrad Cavalry School and then the Frunze Military Academy, graduating in 1935. In addition to his education, he was appointed to command of a regiment of cavalry in Dec. 1929, then a division in 1937, and then the 6th Cavalry Corps in 1938.

On Sept. 17, 1939, Yeryomenko led his 6th Cavalry Corps into eastern Poland as part of the operations agreed to between Germany and the Soviet Union under the Molotov–Ribbentrop Pact. In general, this Soviet operation was not efficiently organized. Yeryomenko (whose Corps contained light tank and other motorized elements) was forced to request an emergency airlift of fuel so as to continue his advance. Despite these difficulties, the Corps kept moving, and Yeryomenko earned the nickname "the Russian Guderian".

Yeryomenko was given command of the prestigious 1st Red Banner Far Eastern Army, deep in eastern Siberia, where he was serving at the outbreak of Operation Barbarossa on June 22, 1941.

Eight days after the invasion began, Yeryomenko was recalled to Moscow, where he was made the Acting Commander of the Soviet Western Front, two days after its original commander, General of the Army Dmitri Pavlov, was dismissed (and later convicted and executed) for incompetence. Yeryomenko was thrust into a very precarious position. The Nazi Blitzkrieg approach to warfare quickly dominated the Western Front, but Yeryomenko motivated the remaining troops, and halted the German offensive just outside Smolensk. During this vicious defensive Battle of Smolensk, Yeryomenko was wounded. Because of his injuries, he was transferred to the newly created Bryansk Front.

In late August, Yeryomenko was ordered to launch counter-offensive operations along the Bryansk Front, primarily against Guderian's Second Panzer Group as it began to move south to trap Kirponos' Southwestern Front around Kiev. Stavka, particularly Stalin and Shaposhnikov, seemed convinced that Yeryomenko could block or distract Guderian's drive and save Kiev from encirclement. The counter-offensive failed to accomplish its objectives despite a valiant effort, leaving Bryansk Front severely weakened.

In October the Germans launched Operation Typhoon, which was an offensive aimed at capturing Moscow. Most of Yeryomenko's weakened forces (3rd, 13th and 50th Armies) were partially encircled by Oct. 8 although small units managed to escape for days or weeks following. On Oct. 13, Yeryomenko was once again wounded, this time severely. He was evacuated to a military hospital in Moscow, where he spent several weeks recovering. In January 1942, Yeryomenko was appointed commander of the 4th Shock Army, part of the Northwestern Front. During the Soviet Winter Counteroffensive, Yeryomenko's army was part of the highly successful Toropets–Kholm Offensive, which liberated Toropets and much of the surrounding region, helping to create the Rzhev Salient, which became a major battlefield over the next 15 months. On Jan. 20, 1942, Yeryomenko was again wounded, this time in one leg, when German planes bombed his headquarters. Yeryomenko refused to evacuate to a hospital until the battle surrounding him finished.

Yeryomenko's performance in the winter offensives restored Stalin's confidence, and he was given command of the Southeastern Front, on Aug. 1, 1942, where he proceeded to launch powerful counterattacks against the German offensive into the Caucasus, Fall Blau. Yeryomenko and Commissar Nikita Khrushchev planned the defense of Stalingrad, rallying and re-organizing men and equipment falling back to the city from the Don River and the steppes to the west. When one of his subordinates, Gen. Anton Lopatin, doubted if his 62nd Army would be able to defend Stalingrad, Yeryomenko replaced him with Lt. Gen. Vasily Chuikov as Army commander on Sept. 11, 1942. Chuikov and the 62nd Army went on to prove themselves as the defenders of the city, confirming Yeryomenko's judgement. On Sept. 28, the Southeastern Front was renamed the Stalingrad Front.

During Operation Uranus, November 1942, Yeryomenko's forces helped to surround the German 6th Army from the south, linking up with the northern penetration at Kalach-na-Donu. German General Erich von Manstein soon attempted to counterattack the Soviet forces and break through the line to relieve the surrounded Germans. Yeryomenko successfully repelled the attack, largely with the forces of the 2nd Guards Army along their fall-back positions on the Myshkova River.

On January 1, 1943, the Stalingrad Front was renamed Southern Front. After the end of the winter offensive, in March 1943, Yeryomenko was transferred north to the Kalinin Front, which remained relatively quiet until September, when Yeryomenko launched a small, but successful offensive. In December, Yeryomenko was once again sent south, this time to take command of the Separate Coastal Army, which was put together to retake Crimea, which was accomplished with assistance from Fyodor Tolbukhin's 4th Ukrainian Front. In April, Yeryomenko once again was sent north, to command the 2nd Baltic Front. During the summer campaign, 2nd Baltic was very successful in crushing German opposition, and was able to capture Riga, helping to bottle up some 30 German divisions in Latvia. On March 26, 1945, Yeryomenko was transferred to the command of the 4th Ukrainian Front, the unit he controlled until the end of the war. Fourth Ukrainian was positioned in Eastern Hungary. Yeryomenko's subsequent offensive helped capture the rest of Hungary, and paved the way for the Soviet liberation of Czechoslovakia. His army liberated many cities and towns in Czechoslovakia, most notably Ostrava. Today, many streets in the Czech Republic bear his name.

He died November 19, 1970. The urn containing his ashes is buried in the Kremlin Wall.

The contents of this page are sourced from Wikipedia article on 08 Mar 2020. The contents are available under the CC BY-SA 4.0 license.
View Andrey Yeryomenko 's image gallery
Image Gallery 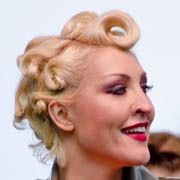