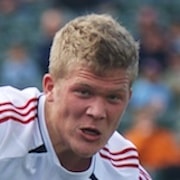 Andreas Evald Cornelius (born 16 March 1993) is a Danish professional footballer who plays as a striker for Parma, on loan from Atalanta, and the Denmark national team.

Cornelius had joined the FC Copenhagen first team squad for its training camps in July 2011 and January 2012.

On 9 April 2012, he played his first Superliga match, coming on as a substitute for César Santin against AGF at NRGi Park in Aarhus. In the previous Superliga match (against Brøndby at Parken Stadium on 5 April 2012), he had been an unused substitute. On 20 May 2012, it was announced that Cornelius would join the first team squad on a permanent basis at the beginning of the upcoming season, together with Christoffer Remmer and Jakob Busk.

Cornelius was awarded player of the month in the Danish Superliga on 7 October 2012. On 15 April, he scored the final goal in a 3–2 win against FC Nordsjælland. This gave FCK a 10-point lead in the league to number 2, and was crucial for Copenhagen winning the title.

Even though Cornelius only played one full season with the first team, he quickly became one of the most popular players of the club, as the print with his name and number on the official shirts being the most popular, selling around 40% of all prints.

On 27 June 2013, Cardiff City announced they had signed Cornelius, for a club record fee. Reports from Denmark suggested a fee of 75 million Danish kroner (approximately £8 million). On 1 July, Cornelius completed his medical and signed a five-year deal with the club, saying "I've been given a great opportunity and this is a very exciting project that's taking place at Cardiff City." Twenty-three days later, he made his debut in a friendly against Forest Green Rovers and scored a goal in a 4–3 victory. However, he sustained a minor injury to his ankle during training the following week, and consequently missed out on the team's first ever Premier League game, against West Ham United on 17 August.

Cornelius made his competitive debut for Cardiff on 25 August against Manchester City, coming on as a stoppage-time replacement for Fraizer Campbell who had scored twice in the 3–2 home victory. Three days later, in a League Cup match against League Two club Accrington Stanley, he made his first competitive start for the club in a 2–0 win; however he re-aggravated the ankle injury he had picked up in pre-season following a heavy tackle and was carried off on a stretcher just before half-time. The injury would prove worse than first feared; and left Cornelius on the sidelines for the next three months, meaning he missed 10 games for Cardiff, as well as the chance to compete for his country Denmark in their final qualification games for the 2014 FIFA World Cup in Brazil.

During the final international break of 2013, Cornelius once again began training with the first team squad, in order to be accessed by the medical staff. They deemed that he was fit to return to action, and therefore arranged a behind closed door friendly with Championship club Yeovil Town on 14 November. He played 60 minutes as planned in a 2–1 defeat and told the media that he was fit and ready to return to action.

On 31 January 2014, Cornelius returned to F.C. Copenhagen for an undisclosed fee, but Cardiff claim they lost most of the money they paid for him. He scored a hat-trick in his first game back at Copenhagen in a friendly match against Slovan Liberec. On 23 February 2014, Cornelius made his first competitive start after re-signing with the club and crowned his comeback with a header to put his team 1–0 in front against AGF at NRGi Park. The match ended in a 1-1 draw.

Cornelius ended his first half season with 5 goals in 13 appearances, including a brace against Randers FC in Parken where he dribbled past four men before sending the ball into the back of the net. On 13 April 2015, he suffered a horrific ankle injury during Copenhagen's Superliga clash against Silkeborg IF ruling him out for the remainder of the season.

On 2 May 2017, it was announced that Cornelius would join Serie A side Atalanta for a fee of around €3.5 million.

On 31 August 2018, hours before the closing of the 2018 summer transfer window, Cornelius joined Ligue 1 side FC Girondins de Bordeaux on loan for the season. The deal reportedly included an option for Bordeaux to sign him permanently for a fee between €7 and 8 million.

On 18 July 2019, Cornelius signed to Serie A club Parma a 2-years loan with an obligation to buy. On 20 October 2019, Cornelius came off the bench in the 11th to substitute the injured Roberto Inglese, and scored a hat trick in a 5–1 home win against Genoa within a span of eight minutes.

In May 2018 he was named in Denmark’s preliminary 35-man squad for the 2018 World Cup in Russia. He played in 3 of Denmark's 4 games, starting in the final group match vs France and the round of 16 match against Croatia. Cornelius did not score any goals in the World Cup.

The contents of this page are sourced from Wikipedia article on 09 Mar 2020. The contents are available under the CC BY-SA 4.0 license.
View Andreas Cornelius 's image gallery
Image Gallery