André Vandernoot (born 2 June 1927, Brussels; died 6 November 1991, Brussels) was a Belgian conductor. He studied at the Royal Music Conservatory in Brussels, and later flute and conducting at the Hochschule für Musik, Vienna. In 1951, he was a prize-winner in a conducting competition in Besançon, France.

He was married to Yugoslavian ballerina Dušanka Sifnios and they had two children: daughter Alexandra Vandernoot, an actress, and son, Patrick Vandernoot, golf instructor.

The contents of this page are sourced from Wikipedia article on 23 Apr 2020. The contents are available under the CC BY-SA 4.0 license.
View André Vandernoot 's image gallery
Image Gallery 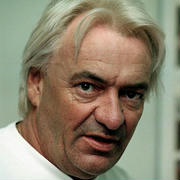