Dr. András Nemény (born 7 June 1976) is a Hungarian jurist and politician, member of the National Assembly from the Hungarian Socialist Party's National List between 2010 and 2014. 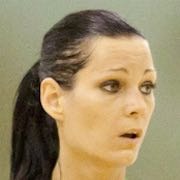