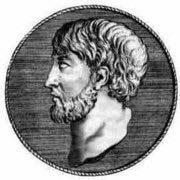 Anaximenes of Miletus
The basics

Anaximenes of Miletus (/ˌænækˈsɪməˌniːz/; Greek: Ἀναξιμένης ὁ Μιλήσιος; c. 586 – c. 526 BC) was an Ancient Greek Pre-Socratic philosopher active in the latter half of the 6th century BC. The details of his life are obscure because none of his work has been preserved. Anaximenes' ideas and philosophies are only known today because of comments made by Aristotle and other writers on the history of Greek philosophy.

As one of the three philosophers of the Milesian School, considered the first revolutionary thinkers of the Western world, Anaximenes is best known and identified as a younger friend or student of Anaximander, who was himself taught by Thales. Each philosopher developed a distinct cosmology without completely rejecting their teacher's view of the universe or creating major disagreement between them. Some of Anaximenes' writings apparently survived the Hellenistic Age, but no record of these documents currently exist. Much of his astronomical thought was based on Anaximander's, though he altered Anaximander's astrological ideas to better fit his own philosophical views on physics and the natural world. Like others in his school of thought, Anaximenes practiced material monism; this tendency to identify one specific underlying reality made up of a material thing is what he is principally remembered for today.

Apollodorus of Damascus noted the dates Anaximander was alive in relation to well-known historical events, and estimated Anaximenes' lifespan as having occurred during the same time period in which Cyrus the Great defeated Croesus at the Battle of Thymbra in 546 BC. Anaximenes was the last known Milesian philosopher, as Miletus was captured by the Persian army in 494 BC.

Anaximenes and the Arche

While his predecessors Thales and Anaximander proposed that the archai (singular: arche, meaning the underlying material of the world) were water and the ambiguous substance apeiron, respectively, Anaximenes asserted that aer (“mist”, “vapor”, “air”) was this primary substance of which all natural things are made. By rejecting his teacher's theory based on the concept of discontinuity, Anaximenes took a more empirical approach to understanding the underlying processes of genesis and change on two assumptions: (1) origination retains properties of the apeiron, but it has an actually tangible state of existence as air that can evolve other substances, and (2) genesis and change depend on a cohesive, mechanistic process known as condensation and rarefaction. Anaximenes believed that air was infinite and divine. He was the first to use the word pneuma (“breath of life”) as a synonym for air. One of the only surviving quotes by Anaximenes reads: “Just as our soul...being air holds us together, so pneuma and air encompass [and guard] the whole world.” The analogy compared atmospheric air as the divine and human air as souls that animate people. This relation of the macroscopic and microscopic suggested Anaximenes believed there was an overarching principle that regulated all life and behavior. Essentially, he thought air was the primary substance that held the universe together. Interestingly, the Old Testament features a similar analogy to the founding of the world and creation of man, but Anaximenes did not recognize a creator of the universe and did not think of the pneuma as a creator to guide man.

The choice of air may seem arbitrary, but Anaximenes based his conclusion on naturally observable phenomena in the processes of rarefaction and condensation. The primary difference in the forms of air as matter was the degree of condensation and density. When air condenses it becomes visible, and according to Anaximenes, the spread-out, invisible, infinite air was condensed to wind, then formed into clouds, which condensed further to produce mist, rain, and other forms of precipitation. As the condensed air cooled, Anaximenes supposed that Earth itself was an early condensate of air—the process continued until the air was condensed enough to form solids like the Earth and ultimately stones. By contrast, Anaximenes was able to visually see how water evaporates into air and based his concept of rarefaction on this observation. According to him, any object that held light was made of fire, and fire was made from the rarefaction of air.

While other philosophers also recognized such transitions in states of matter, Anaximenes was the first to associate the qualitative change in hot/dry and cold/wet pairings with the density of a single material, effectively adding a quantitative dimension to the Milesian monistic system. He attributed condensation to cold/wet air and rarefaction to the interaction of hot/dry air. This concept was the foundation for understanding the existence of different substances, materials, and elements due to their arrangement of atoms and number of subatomic particles.

Since language and communication were very limited in his time, Anaximenes's analogies were key in explaining the uncertain through the certain. For example, he knew for certain that blowing air on his hand with his mouth wide open produced hot air, while blowing on his hand with half-closed lips produced cold air. These observations were key in his postulate that the hot air was due to rarefaction and expansion, whereas the cold air was due to condensation and compression. Although in modern times it is known that this is actually the opposite, Anaximenes was key in arriving at this conclusion. His analogies often connected parallels between man and the cosmos, insinuating that the same natural laws observable on earth applied to the heavens. Over 2000 years later, Isaac Newton proved this to be true. Throughout history, Anaximenes's observations proved helpful to uncover powerful theories, such as quantum physics and chemical properties. By the end of the Milesian philosophy era, there were many questions left unanswered; this sparked the stimulation of Pre-socratic thought to continue through many other notable philosophers such as Pythagoras, Parmenides, Heraclitus, and Democritus.

Anaximenes greatest influence is not from his theories of matter, but instead it is from how he thought about these ideas. For instance, his theory of air being the underlying substance was disproved, but when looking at his idea from a fundamental aspect, in which a substance is capable of changing forms, his theory was the first of its kind. This concept of changing of forms is fundamental to scientific thought and shows how his ideas, although not correct, were helpful in the development of modern views. In the time of Anaximenes, phenomena were usually explained with reference to religion and mythology. Anaximenes explained events like rainbows with concrete ideas instead of saying they were the work of a goddess. The explanation Anaximenes gave helped in the transition of attributing the cause of phenomena to scientific events, rather than mythology.

The origin of the Cosmos

Having concluded that everything in the world is composed of air, Anaximenes used his theory to devise a scheme that explains the origins and nature of the earth and the surrounding celestial bodies. Air felted to create the flat disk of the earth, which he said was table-like and behaved like a leaf floating on air. Anaximenes did not think that stars were floating leaf-like bodies similar to the earth and sun; instead, he thought of stars being similar to nails that are stuck in a transparent shell. In keeping with the prevailing view of celestial bodies as balls of fire in the sky, Anaximenes proposed that the earth let out an exhalation of air that rarefied, ignited and became the stars. While the sun is similarly described as being aflame, it is not composed of rarefied air like the stars, but rather of earth like the moon; its burning comes not from its composition but rather from its rapid motion. Similarly, he considered the moon and sun to be flat and floating on streams of air. In his theory, when the sun sets it does not pass under the earth, but is merely obscured by higher parts of the earth as it circles around and becomes more distant. Anaximenes likens the motion of the sun and the other celestial bodies around the earth to the way that a cap may be turned around the head. Anaximenes believed that the sky was a dome, and day and night are caused by celestial bodies being carried North until they are no longer seen. There is evidence that suggests Anaximenes may have been the first person to distinguish between planets and fixed stars.

Anaximenes used his observations and reasoning to provide causes for other natural phenomena on the earth as well. Earthquakes, he asserted, were the result either of lack of moisture, which causes the earth to break apart because of how parched it is, or of superabundance of water, which also causes cracks in the earth. In either case the earth becomes weakened by its cracks, so that hills collapse and cause earthquakes. Lightning is similarly caused by the violent separation of clouds by the wind, creating a bright, fire-like flash. Rainbows, on the other hand, are formed when densely compressed air is touched by the rays of the sun. These examples show how Anaximenes, like the other Milesian philosophers, looked for the broader picture in nature. They sought unifying causes for diversely occurring events, rather than treating each one on a case-by-case basis, or attributing them to gods or to a personified nature.

The Anaximenes crater on the Moon is named in his honor.

The contents of this page are sourced from Wikipedia article on 09 Mar 2020. The contents are available under the CC BY-SA 4.0 license.
View Anaximenes of Miletus 's image gallery
Image Gallery 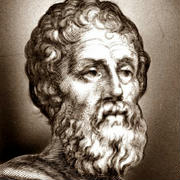 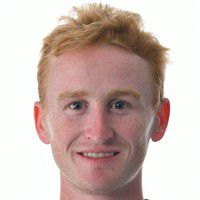