Almazbek Sharshenovich Atambayev (Kyrgyz: Алмазбек Шаршенович (Шаршен уулу) Атамбаев, Almazbek Şarşenoviç (Şarşen uulu) Atambayev; born 17 September 1956) is a Kyrgyz politician who served as the President of Kyrgyzstan from 1 December 2011 to 24 November 2017. He was Prime Minister of Kyrgyzstan from 17 December 2010 to 1 December 2011, and from 29 March 2007 to 28 November 2007. He served as Chairman of the Social Democratic Party of Kyrgyzstan (SDPK) from 30 July 1999 to 23 September 2011. Currently he is imprisoned, facing charges of corruption and manslaughter.

Almazbek Atambaev was born in 1956 in the Northern region of Chui. His father, Sharshen Atambayev, was a veteran of World War II (Great Patriotic War) who served on the front lines in Eastern Europe.

Atambaev received his degree in economics while studying at the Moscow Institute of Management. He has four children from his marriage to his first wife Buazhar. In 1988 he married his second wife, Raisa, with whom he has six children: daughters Aliya (born 1997), Diana, and Dinara, and sons Seyit, Seytek, and Khadyrbek (born 1993). Raisa is an ethnic Tatar, born in the Urals in Russia, who moved to Osh as a child, with her parents. She is a doctor.

In January 2018, he published a song he authored called "Kyrgyzstan", which was later rewritten by Azerbaijani performer Araz Elses.

Atambayev was an unsuccessful candidate in the October 2000 presidential election, receiving 6% of the vote. He served as the Minister of Industry, Trade and Tourism in the government from 20 December 2005 until he resigned on 21 April 2006.

In November 2006 he was one of the leaders of anti-government protests in Bishkek, under the umbrella of the movement 'For Reform!' (За Реформы). He was also involved in earlier protests in late April 2006.

On 26 December 2006 Atambayev rejected calls from other lawmakers for a dissolution of the Supreme Council, saying, "It is impossible for this Parliament to be dissolved at least until May [2007], and it has to adopt all the laws. Otherwise there will be a war in Kyrgyzstan, because even if Parliament adopts the [proposed] authoritarian constitution, I will tell you openly, we will not accept it. It would be a constitution adopted illegally. Then we would take every [possible protest action]. We are ready for that."

Following the resignation of Prime Minister Azim Isabekov on 29 March 2007, Atambayev was appointed acting Prime Minister by President Kurmanbek Bakiyev. He was then confirmed in parliament by a vote of 48-3 on 30 March. He is the first prime minister in Central Asia to come from an opposition party. On 11 April, he tried to address a large protest in Bishkek demanding Bakiyev's resignation, but was booed by the protesters.

Bakiyev announced the resignation of Atambayev's government on 24 October 2007, following a constitutional referendum. The government was to remain in office until after a parliamentary election in December. Nonetheless, Atambayev resigned on 28 November 2007; Bakiyev accepted the resignation, while praising Atambayev for his performance in office, and appointed Acting First Deputy Prime Minister Iskenderbek Aidaraliyev in his place as Acting Prime Minister. Edil Baisalov of the Social Democratic Party claimed that Atambayev was forced out of office because he was an obstacle to alleged government interference in the parliamentary election.

On 20 April 2009, Atambayev was announced as a candidate for the July 2009 presidential elections. But on polling day Atambayev withdrew his candidacy claiming "widespread fraud": "Due to massive, unprecedented violations, we consider these elections illegitimate and a new election should be held".

Following the 2010 parliamentary election, he was chosen to be Prime Minister at the head of a coalition government with his SDPK, Respublika, and Ata-Zhurt (which won a plurality in the election).

Atambayev ran in 2011 to succeed Roza Otunbayeva as President of Kyrgyzstan. On election day, 30 October 2011, he won in a landslide, defeating Adakhan Madumarov from the Butun Kyrgyzstan party and Kamchybek Tashiev from the Ata-Zhurt party with 63% of the vote from about 60% of the eligible Kyrgyz population voting.

He was inaugurated on 1 December 2011. It took place in the National Philarmonic Hall in Bishkek. The ceremony was attended by the President of Turkey, Abdullah Gul, Prime Minister of Kazakhstan Karim Masimov, Prime Minister of Azerbaijan Artur Rasizade and President of Georgia, Mikheil Saakashvili. The attendance of the head of the Presidential Administration of Russia Sergey Naryshkin and the Head of Chechnya Ramzan Kadyrov was expected, however they could not and instead sent lower level Russian Foreign Ministry officials in their place. During his inaugural speech, he said the following about the future of Kyrgyzstan:

"Today we are writing a new story. This is not the history of the president, but a new history of our country."

The ceremony budget cost less than half of what was spent for inauguration ceremony of Kurmanbek Bakiev in August 2009, costing about 10 million Soms ($217,000 in US Dollars). Unlike the breastplates used for the inaugurations of Akaev, Bakiyev and Otunbayeva, which were framed with diamonds and pearls, the jewelers decided not to use the gems in the 108 centimeter long breastplate as it was considered to be an "imported" element in the national culture.

In November 2015, the Ministry of Defense was re-branded as the State Committee for Defense Affairs on Atambayev's orders while transferring authority over the Armed Forces of Kyrgyzstan to the General Staff, with the Chief of the General Staff excersing his/her authority as the paramount leader of the military and the second in command to the president. In December 2016, Atambayev signed a decree officially abolishing the use of military courts in Kyrgyzstan. This was done on a recommendation made by the Commission for the Reform of the Judicial System, which said that the state budget couldn't fund these institutions anymore. Earlier that month, he presided over a constitutional referendum which proposed that the increasing the powers of the Prime Minister and his/her government, as well as reforms to the judicial system. It also established that marriage could be only "between a man and a woman" rather of "between two persons" as laid out by the previous constitution. The changes were approved with a landslide majority of close to 80% of the Kyrgyz population.

The final year of Atambayev's presidency was marred by numerous civil and criminal trials against journalists, activists and opposition politicians. In many of those trials, the Prosecutor General's Office of Kyrgyzstan has often acted on Atambayev's behalf to represents his interests.

In 2011 soon after becoming President, Atambayev travelled to Turkey and signed an agreement with the Turkish President agreeing to increase trade from $300 million in 2011 to $1 billion by 2015, with Turkey also agreeing to attract Turkish investment to Kyrgyzstan to the amount of $450 million within the next few years.

Atambayev has repeatedly presented himself as a pro-Russian politician. He has announced Kyrgyzstan's entry into the Customs Union, secured the withdrawal of the American military base from the country in 2014, and has spoken of the need for closer economic relations with the Russian Federation, which employs at least 500,000 citizens of Kyrgyzstan; however, he also expressed his wish to achieve greater economic and energy independence from it.

In early 2012 Atambayev travelled to Moscow, where in his meeting with Medvedev he called for the $15 million owed by Russia to Kyrgyzstan for their use of the Kant airbase.

In 2013, he launched a tirade against the United Kingdom, accusing it undermined democracy by allowing a Bakiyev's son, Maxim to live in London:

"Is Britain hosting the kids of [Muammar] Gaddafi or Bashar al-Assad? Why are there double standards against Kyrgyzstan? Britain is saying: 'We want to help with democratic development in Kyrgyzstan.' That's a lie. You're hosting a guy who robbed us. We could use that money to fund fair elections".

In February 2015, tension with Belarus arose over the death of Almanbet Anapiyaev, aged 41, whose death Atambayev said lied solely in former Security Service chief Janish Bakiyev, who was being sheltered in Minsk alongside his father. The Belarusian Foreign Ministry responded by saying that it "makes no sense" to comment on his statement. In May 2015, during a Victory Day meeting of CSTO leaders in Moscow, Atambayev took part in an argument with President Islam Karimov over which who was being more patriotic during the 70th anniversary celebrations.

During the Kyrgyz presidential election in 2017, Atambayev accused Kazakhstan of sponsoring Ömürbek Babanov, who was one of the presidential candidates. He also accused Kazakhstan officials for being corrupt by looting the pensioners income. On 9 October 2017, Atambayev announced that he wouldn't attend the CIS heads of state summit in Sochi, which would have required the Kyrgyz leader to meet president of Kazakhstan, Nursultan Nazarbayev. That same month, he visited the Uzbek capital of Tashkent in a breakthrough visit for a Kyrgyz leader.

Since he left office on 24 November 2017 and handed the presidency to his successor and former prime minister Sooronbay Jeenbekov, he has served as head of the SDPK. He has also has used his post presidency to get back in the political arena, most notably by criticizing his successor. This criticism, which began in the spring of 2018, has mostly revolved around Jeenbekov's criticism of the government corruption that took place under his rule. One of Atambayev's main points of criticism of Jeenbekov is that is that he is a victim of a smear campaign by his former ally and his government, saying the following to the April Television Agency about the Jeenbekov government:

On 17 March, he expressed regret by saying: "I apologize to everyone for bringing this person to power". In June 2019, MPs voted to strip Atambayev of his presidential immunity and called for the pursuement of criminal charges on him. In response, Atambayev told reporters at his residence in Koy-Tash that he would "stand to the end" against the parliament and that he is "not afraid of anything in this world". Since then, he remained in his compound while publicly stating that he has weapons at his disposal to "fight back" if police come. On 3 July, Atambaev left his compound for the first time in weeks to speak at a rally of 1,000 of his supporters who called for all the charges to be dropped. On 24 July, he began a two-day visit to Russia with a delegation from the SDPK after departing on a Sukhoi Superjet 100 at Kant Air Base (operated by the Russian Air Force) at 1:48 pm that day. During the visit, he met with President Vladimir Putin in the Kremlin.

On 7 August 2019, the Special Forces of Kyrgyzstan attacked Atambayev's residence in Bishkek, supposedly based on charges of corruption made against him. As a result of the attack, 36 people were injured and one soldier died In a meeting of the Security Council, Jeenbekov accused Atambayev of "rudely violating the constitution". A second raid was launched the next day, after which Atambayev surrendered to security forces.

On 13 August, Orozbek Opumbayev, the head of the State Committee of National Security (SCNS), said Atambayev was plotting to topple the government before he was taken into custody.

The contents of this page are sourced from Wikipedia article on 24 Jun 2020. The contents are available under the CC BY-SA 4.0 license.
View Almazbek Atambayev 's image gallery
Image Gallery 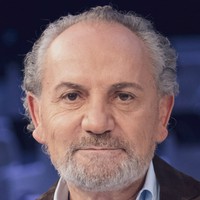 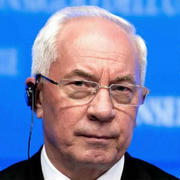