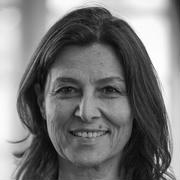 Aliza Bin-Noun is an Israeli diplomat. The daughter of a Holocaust survivor, she serves as the Israeli Ambassador to France and Monaco.

Aliza Bin-Noun grew up near Nahariya, in northern Israel. Her Hungarian paternal grandparents were deported to the Auschwitz concentration camp during World War II. Her father is a Holocaust survivor.

Bin-Noun graduated from the Hebrew University of Jerusalem, where she studied French. She served in the Israel Defense Forces.

Bin-Noun is a career diplomat. From 2001 to 2006, she was Advisor in the Arms Control Division, followed by Advisor in Political Affairs, and Director of Department of Coordination Bureau. She served as a diplomat in Budapest, Hungary from 2007 to 2011. In 2012, she was appointed as the Head of the Political Bureau in the Israeli Ministry of Foreign Affairs.

Bin-Noun has a husband, Klaus, and two daughters.