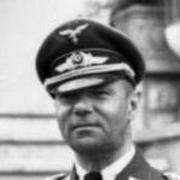 Alfred Schlemm (18 December 1894 – 24 January 1986) was a German General der Fallschirmtruppe in the Wehrmacht. His last command in World War II opposed the advance of the First Canadian Army through the Reichswald in February 1945.

Schlemm joined the Prussian Army in 1913. During the inter-war years, Schlemm served in a variety of staff, training and regimental posts until, in October 1937, he was attached to the Reich Air Ministry. In February 1938, he transferred from the Army to the Luftwaffe and was appointed to the Luftwaffe General Staff and in June 1938, he became Chief of Staff of Air Defense Zone West.

In October 1939, he became Chief of Staff of Luftgau [Air Zone] XI, under Generalleutnant Ludwig Wolff and in December 1940, Schlemm was appointed Chief of Staff of the XI Air Corps under General der Flieger Kurt Student. The Corps was the headquarters staff of Germany's parachute and air landing forces which, on 20 May 1941, the Germans used for Operation Merkur, the airborne invasion of Crete. At least 6,000 airborne troops were lost and the conquest of Crete effectively ended all plans for large-scale German airborne operations.

From February 1942, Schlemm was attached to the General Command of the 8th Air Corps (Generaloberst Wolfram Freiherr von Richthofen) on the Eastern Front, where he became Commander of Luftwaffen-Gefechtsverbande ("Battle Formation") Schlemm assigned to the XXXX Panzer Corps and the LVI Panzer Corps in General der Infanterie Gotthard Heinrici’s 4th Army. Schlemm became commander of the 1st Air Division in June 1942.

Withdrawn from the line in November 1943, Schlemm's four divisions were attached to the LIII and IX Army Corps and were transferred to Italy. On 1 January 1944, Schlemm's headquarters staff, redesignated as 1st Air Corps, took control of a reserve force of 24,000 troops in the Rome area. They were initially dispatched from Rome to bolster the Winter Line along the Garigliano River, but soon Schlemm's corps were urgently transferred to oppose the Allied beachhead at Anzio (Operation Shingle). Schlemm led the German troops for three days until command formally passed to Generaloberst Eberhard von Mackensen, Commander-in-Chief of the 14th Army. The Corps fought at Anzio for the next three months. Schlemm was cited in the official Armed Forces Communiqué and received the Knight's Cross of the Iron Cross for his efforts.

After the Winter Line was breached at Cassino and the Anzio bridgehead breakout, Schlemm's Corps joined the German withdrawal through central Italy. By August 1944, they were lodged in the Arno and Gothic Line defensive positions in the northern Apennines. Schlemm relinquished command of the Corps to Generalleutnant Richard Heidrich.

The Canadian First Army and Lieutenant-General William H Simpson’s U.S. Ninth Army compressed Schlemm's forces into a small bridgehead on the west bank of the Rhine opposite Wesel. On 10 March 1945, the rearguard of the 1st Parachute Army evacuated their bridgehead, destroying the bridge behind them. He was wounded in an air attack on his command post at Haltern eleven days later and command of his forces passed to General Günther Blumentritt.