Alfred Hauge (17 October 1915 – 31 October 1986) was a Norwegian educator, journalist, novelist, poet and historian. He wrote extensively about life on the Ryfylke islands and about Norwegian-American emigration.

Hauge was born and grew up on the island of Kyrkjøy in Sjernarøy, part of Finnøy municipality in Rogaland County, Norway. He was the son of Kolbein Andersson Hauge (1889–1972) and Marianne Rasmusdotter Auglænd (1893–1967). His brother Kolbjørn Hauge (1926-2007) was a schoolteacher and author. He completed primary school at Bryne in Time and graduated artium at Voss in Hordaland during 1935. He obtained his teaching degree at Oslo in 1939. He worked as a teacher at Karmøy in Rogaland and at Stavern in Vestfold until 1945. From 1952-53, he was the Rector of the Ryfylke Folkehøgskule at Sand in Hedmark. From 1953-83, he was a journalist at Stavanger Aftenblad.

Hauge debuted with the historical novel Septemberfrost in 1941. Hauge is best known for describing the life and adventures of Cleng Peerson, a pioneer Norwegian immigrant to the United States in the 1820s. His trilogy included: Hundevakt (1961; "Midwatch”), Landkjenning (1964; "Land Sighting"), and Ankerfeste (1965; “Anchoring”). This collected work was published as Cleng Peerson in Norway during 1968. An English-language version was translated by Eric J. Friis and published under the same title during 1975. This publication was released as one of the official publications of the Norwegian Immigration Sesquicentennial in 1975.

Hauge received numerous literary awards during his career. In 1955, Hauge won the Gyldendal's Endowment, a literature prize which was awarded by the Norwegian publisher Gyldendal Norsk Forlag. In recognition of his work he was also awarded the Norwegian Critics Prize for Literature in 1965. Hauge was made a Knight 1st Class the Order of St. Olav in 1976. He received an honorary doctorate at Luther College at Decorah, Iowa in 1982.

A memorial to Hauge has been erected on the island of Kyrkjøy at Sjernarøy Church (Sjernarøy kirke). The memorial is a bust made by artist Svein Magnus Håvarstein (1942–2013). Sjernarøy Church is an historic wooden church which dates to 1636. 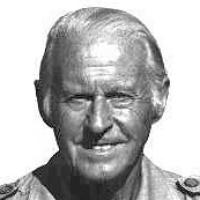